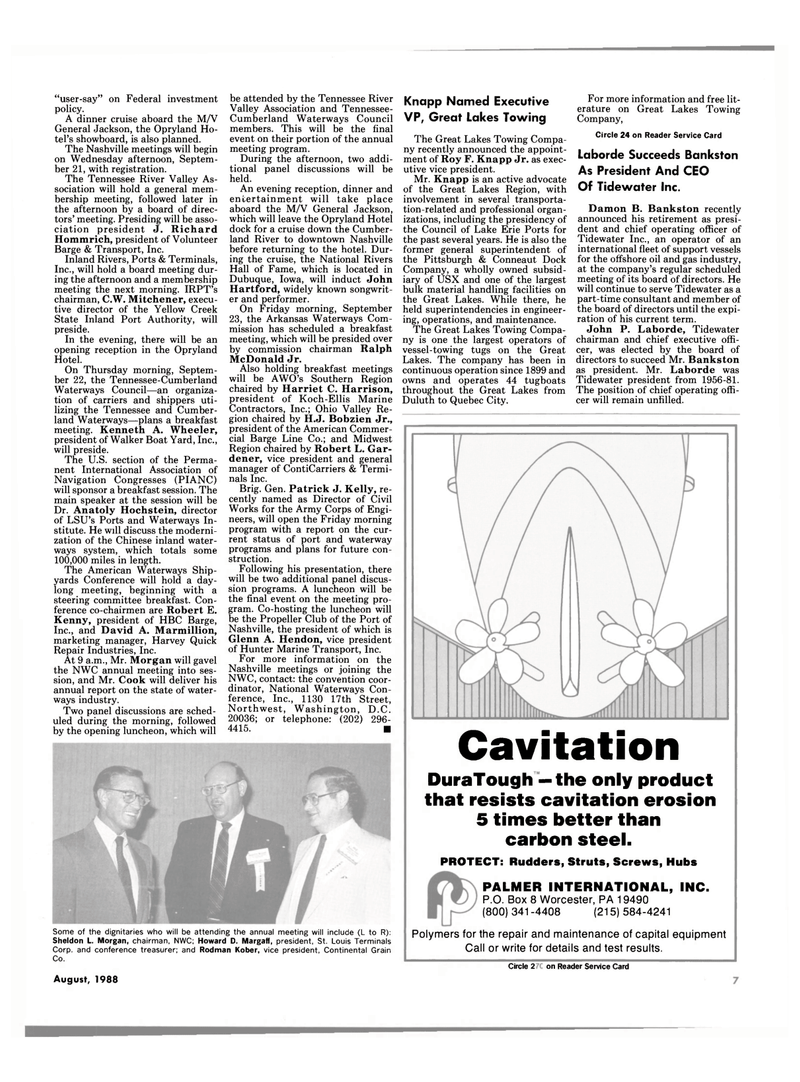 A dinner cruise aboard the M/V

The Nashville meetings will begin on Wednesday afternoon, Septem- ber 21, with registration.

The Tennessee River Valley As- sociation will hold a general mem- bership meeting, followed later in the afternoon by a board of direc- tors' meeting. Presiding will be asso- ciation president J. Richard

Inc., will hold a board meeting dur- ing the afternoon and a membership meeting the next morning. IRPT's chairman, C.W. Mitchener, execu- tive director of the Yellow Creek

In the evening, there will be an opening reception in the Opryland

The U.S. section of the Perma- nent International Association of

Navigation Congresses (PIANC) will sponsor a breakfast session. The main speaker at the session will be

Dr. Anatoly Hochstein, director of LSU's Ports and Waterways In- stitute. He will discuss the moderni- zation of the Chinese inland water- ways system, which totals some 100,000 miles in length.

At 9 a.m., Mr. Morgan will gavel the NWC annual meeting into ses- sion, and Mr. Cook will deliver his annual report on the state of water- ways industry.

Two panel discussions are sched- uled during the morning, followed by the opening luncheon, which will be attended by the Tennessee River

Cumberland Waterways Council members. This will be the final event on their portion of the annual meeting program.

During the afternoon, two addi- tional panel discussions will be held.

An evening reception, dinner and entertainment will take place aboard the M/V General Jackson, which will leave the Opryland Hotel dock for a cruise down the Cumber- land River to downtown Nashville before returning to the hotel. Dur- ing the cruise, the National Rivers

Hall of Fame, which is located in

On Friday morning, September 23, the Arkansas Waterways Com- mission has scheduled a breakfast meeting, which will be presided over by commission chairman Ralph

Works for the Army Corps of Engi- neers, will open the Friday morning program with a report on the cur- rent status of port and waterway programs and plans for future con- struction.

Nashville, the president of which is

For more information on the

Nashville meetings or joining the

Mr. Knapp is an active advocate of the Great Lakes Region, with involvement in several transporta- tion-related and professional organ- izations, including the presidency of the Council of Lake Erie Ports for the past several years. He is also the former general superintendent of the Pittsburgh & Conneaut Dock

Company, a wholly owned subsid- iary of USX and one of the largest bulk material handling facilities on the Great Lakes. While there, he held superintendencies in engineer- ing, operations, and maintenance.

Lakes. The company has been in continuous operation since 1899 and owns and operates 44 tugboats throughout the Great Lakes from

As President And CEO

Damon B. Bankston recently announced his retirement as presi- dent and chief operating officer of

Tidewater Inc., an operator of an international fleet of support vessels for the offshore oil and gas industry, at the company's regular scheduled meeting of its board of directors. He will continue to serve Tidewater as a part-time consultant and member of the board of directors until the expi- ration of his current term.

John P. Laborde, Tidewater chairman and chief executive offi- cer, was elected by the board of directors to succeed Mr. Bankston as president. Mr. Laborde was

The position of chief operating offi- cer will remain unfilled.

Some of the dignitaries who will be attending the annual meeting will include (L to R):

Polymers for the repair and maintenance of capital equipment

Call or write for details and test results.