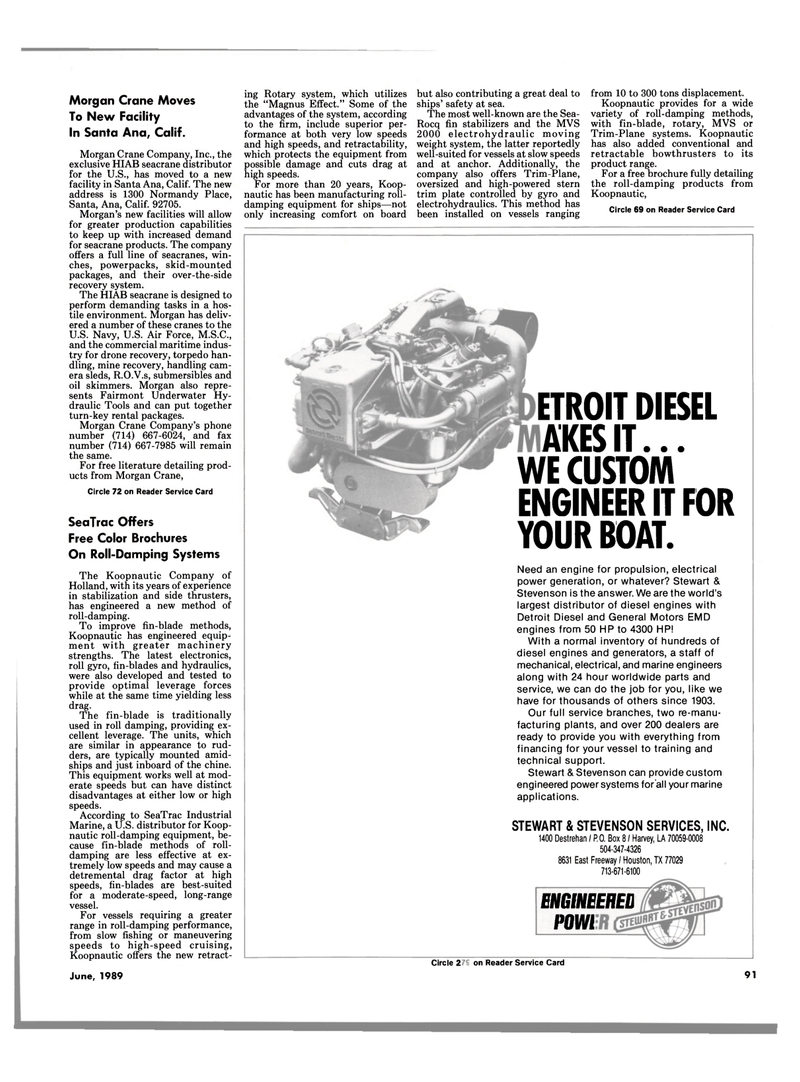 Morgan Crane Company, Inc., the exclusive HIAB seacrane distributor for the U.S., has moved to a new facility in Santa Ana, Calif. The new address is 1300 Normandy Place,

Morgan's new facilities will allow for greater production capabilities to keep up with increased demand for seacrane products. The company offers a full line of seacranes, win- ches, powerpacks, skid-mounted packages, and their over-the-side recovery system.

The HIAB seacrane is designed to perform demanding tasks in a hos- tile environment. Morgan has deliv- ered a number of these cranes to the

Holland, with its years of experience in stabilization and side thrusters, has engineered a new method of roll-damping.

The fin-blade is traditionally used in roll damping, providing ex- cellent leverage. The units, which are similar in appearance to rud- ders, are typically mounted amid- ships and just inboard of the chine.

This equipment works well at mod- erate speeds but can have distinct disadvantages at either low or high speeds.

Marine, a U.S. distributor for Koop- nautic roll-damping equipment, be- cause fin-blade methods of roll- damping are less effective at ex- tremely low speeds and may cause a detremental drag factor at high speeds, fin-blades are best-suited for a moderate-speed, long-range vessel.

For vessels requiring a greater range in roll-damping performance, from slow fishing or maneuvering speeds to high-speed cruising,

June, 1989 ing Rotary system, which utilizes the "Magnus Effect." Some of the advantages of the system, according to the firm, include superior per- formance at both very low speeds and high speeds, and retractability, which protects the equipment from possible damage and cuts drag at high speeds.

For more than 20 years, Koop- nautic has been manufacturing roll- damping equipment for ships—not only increasing comfort on board but also contributing a great deal to ships' safety at sea.

The most well-known are the Sea-

Rocq fin stabilizers and the MVS 2000 electrohydraulic moving weight system, the latter reportedly well-suited for vessels at slow speeds and at anchor. Additionally, the company also offers Trim-Plane, oversized and high-powered stern trim plate controlled by gyro and electrohydraulics. This method has been installed on vessels ranging from 10 to 300 tons displacement.

For a free brochure fully detailing the roll-damping products from

Need an engine for propulsion, electrical power generation, or whatever? Stewart &

Stevenson is the answer. We are the world's largest distributor of diesel engines with

With a normal inventory of hundreds of diesel engines and generators, a staff of mechanical, electrical, and marine engineers along with 24 hour worldwide parts and service, we can do the job for you, like we have for thousands of others since 1903.

Our full service branches, two re-manu- facturing plants, and over 200 dealers are ready to provide you with everything from financing for your vessel to training and technical support.