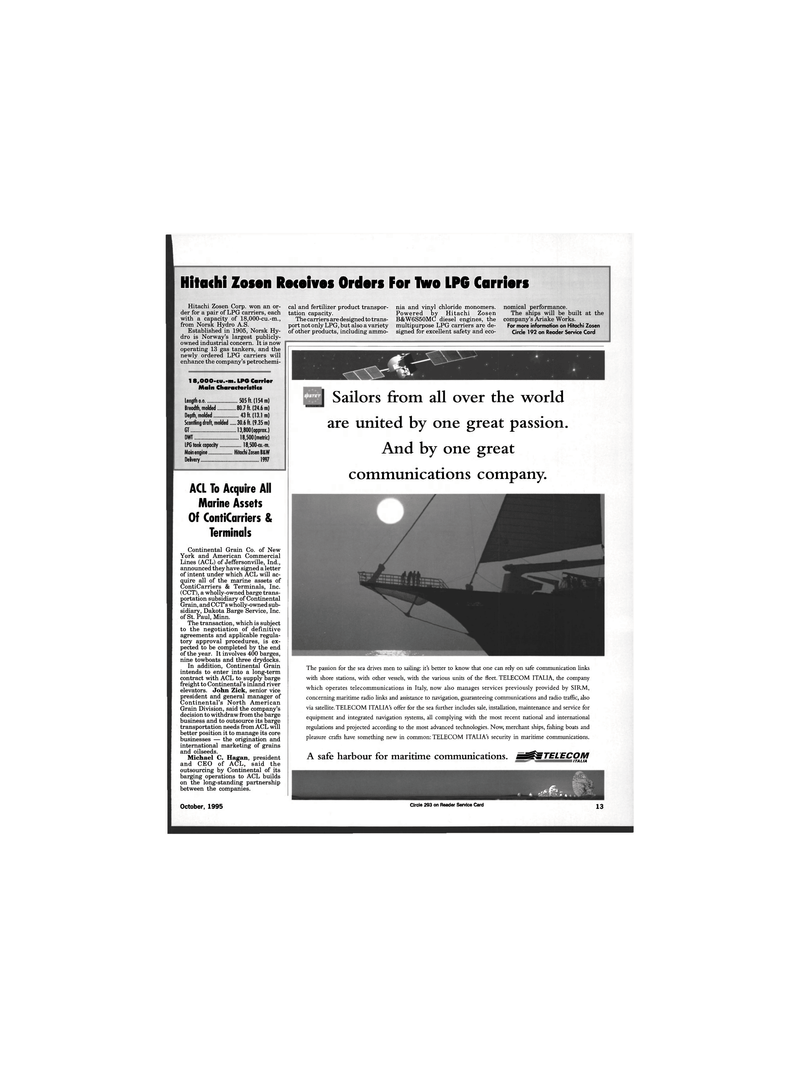 ACL To Acquire All

Lines (ACL) of Jeffersonville, Ind., announced they have signed a letter of intent under which ACL will ac- quire all of the marine assets of

The transaction, which is subject to the negotiation of definitive agreements and applicable regula- tory approval procedures, is ex- pected to be completed by the end of the year. It involves 400 barges, nine towboats and three drydocks.

Grain Division, said the company's decision to withdraw from the barge business and to outsource its barge transportation needs from ACL will better position it to manage its core businesses — the origination and international marketing of grains and oilseeds.

Michael C. Hagan, president and CEO of ACL, said the outsourcing by Continental of its barging operations to ACL builds on the long-standing partnership between the companies. cal and fertilizer product transpor- tation capacity.

The carriers are designed to trans- port not only LPG, but also a variety of other products, including ammo- nia and vinyl chloride monomers.

The ships will be built at the company's Ariake Works.

For more information on Hitachi Zosen

Sailors from all over the world are united by one great passion.

And by one great communications company.

The passion for the sea drives men to sailing: it's better to know that one can rely on safe communication links with shore stations, with other vessels, with the various units of the fleet. TELECOM ITALIA, the company which operates telecommunications in Italy, now also manages services previously provided by SIRM, concerning maritime radio links and assistance to navigation, guaranteeing communications and radio traffic, also via satellite. TELECOM ITALIA's offer for the sea further includes sale, installation, maintenance and service for equipment and integrated navigation systems, all complying with the most recent national and international regulations and projected according to the most advanced technologies. Now, merchant ships, fishing boats and pleasure crafts have something new in common: TELECOM ITALIA's security in maritime communications.