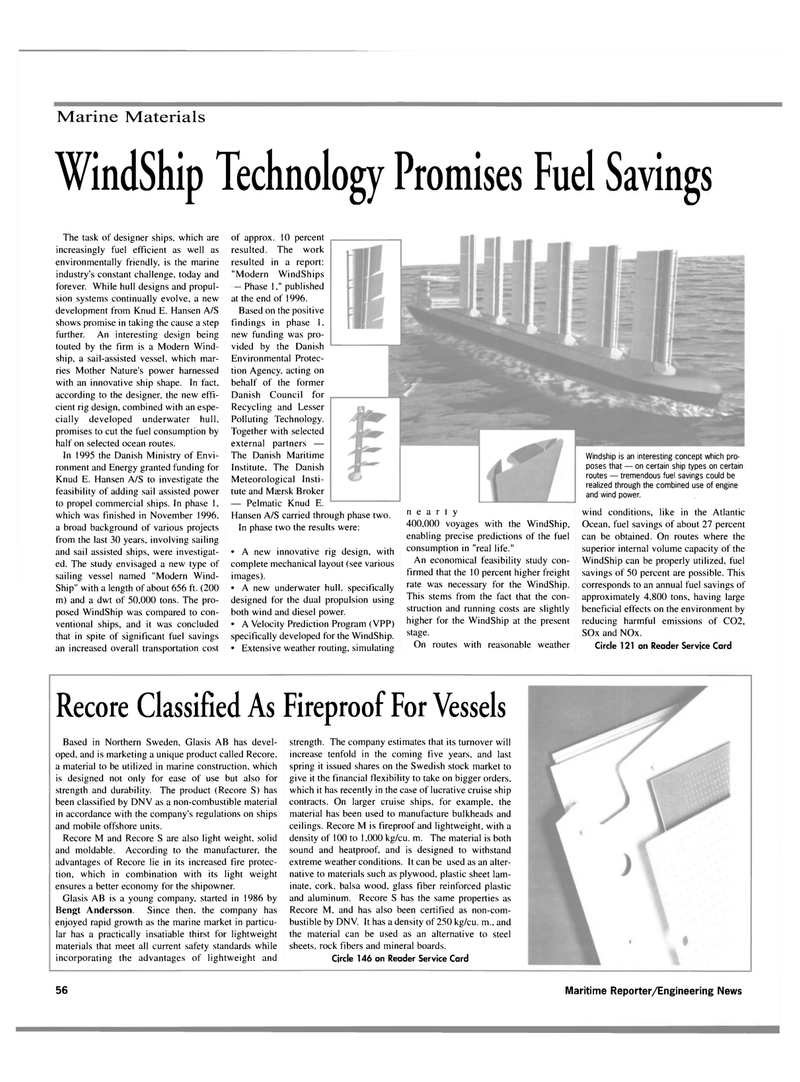 The task of designer ships, which are increasingly fuel efficient as well as environmentally friendly, is the marine industry's constant challenge, today and forever. While hull designs and propul- sion systems continually evolve, a new development from Knud E. Hansen A/S shows promise in taking the cause a step further. An interesting design being touted by the firm is a Modern Wind- ship. a sail-assisted vessel, which mar- ries Mother Nature's power harnessed with an innovative ship shape. In fact, according to the designer, the new effi- cient rig design, combined with an espe- cially developed underwater hull, promises to cut the fuel consumption by half on selected ocean routes.

Knud E. Hansen A/S to investigate the feasibility of adding sail assisted power to propel commercial ships. In phase 1, which was finished in November 1996, a broad background of various projects from the last 30 years, involving sailing and sail assisted ships, were investigat- ed. The study envisaged a new type of sailing vessel named "Modern Wind-

Ship" with a length of about 656 ft. (200 m) and a dwt of 50.000 tons. The pro- posed WindShip was compared to con- ventional ships, and it was concluded that in spite of significant fuel savings an increased overall transportation cost of approx. 10 percent resulted. The work resulted in a report: "Modern WindShips — Phase 1," published at the end of 1996.

Based on the positive findings in phase 1, new funding was pro- vided by the Danish

Environmental Protec- tion Agency, acting on behalf of the former

Together with selected external partners —

An economical feasibility study con- firmed that the 10 percent higher freight rate was necessary for the WindShip.

This stems from the fact that the con- struction and running costs are slightly higher for the WindShip at the present stage.

On routes with reasonable weather

Windship is an interesting concept which pro- poses that — on certain ship types on certain routes — tremendous fuel savings could be realized through the combined use of engine and wind power. wind conditions, like in the Atlantic

Ocean, fuel savings of about 27 percent can be obtained. On routes where the superior internal volume capacity of the

WindShip can be properly utilized, fuel savings of 50 percent are possible. This corresponds to an annual fuel savings of approximately 4,800 tons, having large beneficial effects on the environment by reducing harmful emissions of C02,

Recore Classified As Fireproof For Vessels

Based in Northern Sweden, Glasis AB has devel- oped, and is marketing a unique product called Recore. a material to be utilized in marine construction, which is designed not only for ease of use but also for strength and durability. The product (Recore S) has been classified by DNV as a non-combustible material in accordance with the company's regulations on ships and mobile offshore units.

Recore M and Recore S are also light weight, solid and moldable. According to the manufacturer, the advantages of Recore lie in its increased fire protec- tion, which in combination with its light weight ensures a better economy for the shipowner.

Glasis AB is a young company, started in 1986 by

Bengt Andersson. Since then, the company has enjoyed rapid growth as the marine market in particu- lar has a practically insatiable thirst for lightweight materials that meet all current safety standards while incorporating the advantages of lightweight and strength. The company estimates that its turnover will increase tenfold in the coming five years, and last spring it issued shares on the Swedish stock market to give it the financial flexibility to take on bigger orders, which it has recently in the case of lucrative cruise ship contracts. On larger cruise ships, for example, the material has been used to manufacture bulkheads and ceilings. Recore M is fireproof and lightweight, with a density of 100 to 1.000 kg/cu. m. The material is both sound and heatproof, and is designed to withstand extreme weather conditions. It can be used as an alter- native to materials such as plywood, plastic sheet lam- inate. cork, balsa wood, glass fiber reinforced plastic and aluminum. Recore S has the same properties as

Recore M, and has also been certified as non-com- bustible by DNV. It has a density of 250 kg/cu. m., and the material can be used as an alternative to steel sheets, rock fibers and mineral boards.