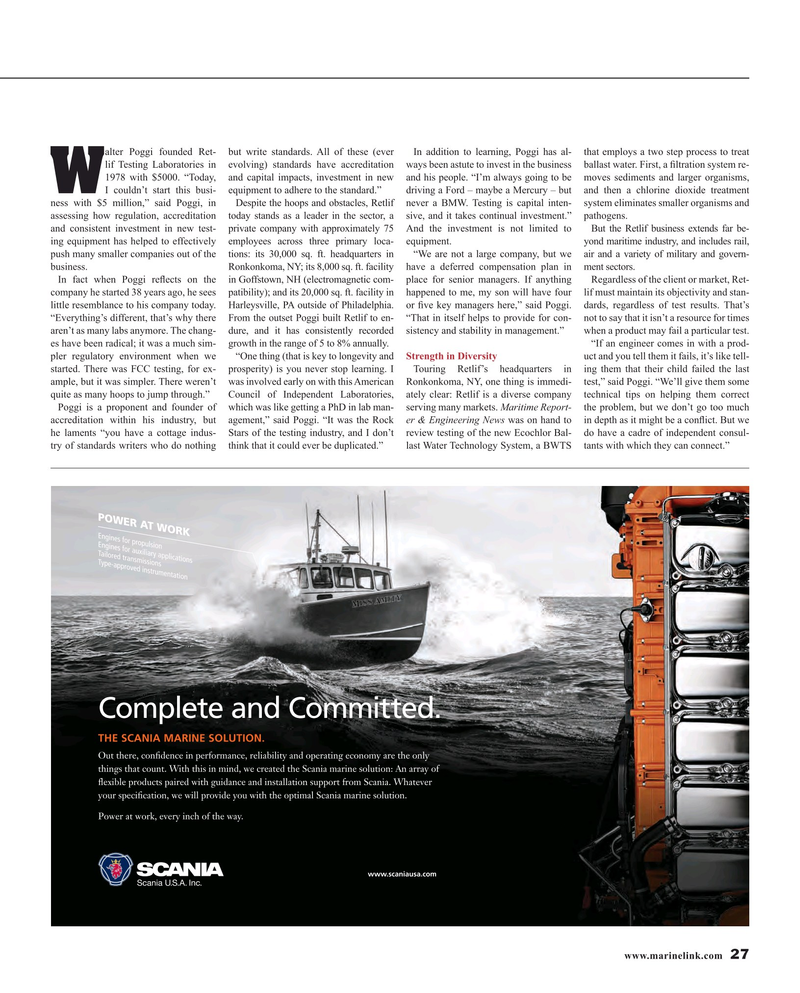 alter Poggi founded Ret- but write standards. All of these (ever In addition to learning, Poggi has al- that employs a two step process to treat lif Testing Laboratories in evolving) standards have accreditation ways been astute to invest in the business ballast water. First, a ? ltration system re- 1978 with $5000. “Today, and capital impacts, investment in new and his people. “I’m always going to be moves sediments and larger organisms,

WI couldn’t start this busi- equipment to adhere to the standard.” driving a Ford – maybe a Mercury – but and then a chlorine dioxide treatment ness with $5 million,” said Poggi, in Despite the hoops and obstacles, Retlif never a BMW. Testing is capital inten- system eliminates smaller organisms and assessing how regulation, accreditation today stands as a leader in the sector, a sive, and it takes continual investment.” pathogens. and consistent investment in new test- private company with approximately 75 And the investment is not limited to But the Retlif business extends far be- ing equipment has helped to effectively employees across three primary loca- equipment. yond maritime industry, and includes rail, push many smaller companies out of the tions: its 30,000 sq. ft. headquarters in “We are not a large company, but we air and a variety of military and govern- business. Ronkonkoma, NY; its 8,000 sq. ft. facility have a deferred compensation plan in ment sectors.

In fact when Poggi re? ects on the in Goffstown, NH (electromagnetic com- place for senior managers. If anything Regardless of the client or market, Ret- company he started 38 years ago, he sees patibility); and its 20,000 sq. ft. facility in happened to me, my son will have four lif must maintain its objectivity and stan- little resemblance to his company today. Harleysville, PA outside of Philadelphia. or ? ve key managers here,” said Poggi. dards, regardless of test results. That’s “Everything’s different, that’s why there From the outset Poggi built Retlif to en- “That in itself helps to provide for con- not to say that it isn’t a resource for times aren’t as many labs anymore. The chang- dure, and it has consistently recorded sistency and stability in management.” when a product may fail a particular test.

es have been radical; it was a much sim- growth in the range of 5 to 8% annually. “If an engineer comes in with a prod- pler regulatory environment when we “One thing (that is key to longevity and Strength in Diversity uct and you tell them it fails, it’s like tell- started. There was FCC testing, for ex- prosperity) is you never stop learning. I Touring Retlif’s headquarters in ing them that their child failed the last ample, but it was simpler. There weren’t was involved early on with this American Ronkonkoma, NY, one thing is immedi- test,” said Poggi. “We’ll give them some quite as many hoops to jump through.” Council of Independent Laboratories, ately clear: Retlif is a diverse company technical tips on helping them correct

Poggi is a proponent and founder of which was like getting a PhD in lab man- serving many markets. Maritime Report- the problem, but we don’t go too much accreditation within his industry, but agement,” said Poggi. “It was the Rock er & Engineering News was on hand to in depth as it might be a con? ict. But we he laments “you have a cottage indus- Stars of the testing industry, and I don’t review testing of the new Ecochlor Bal- do have a cadre of independent consul- try of standards writers who do nothing think that it could ever be duplicated.” last Water Technology System, a BWTS tants with which they can connect.”