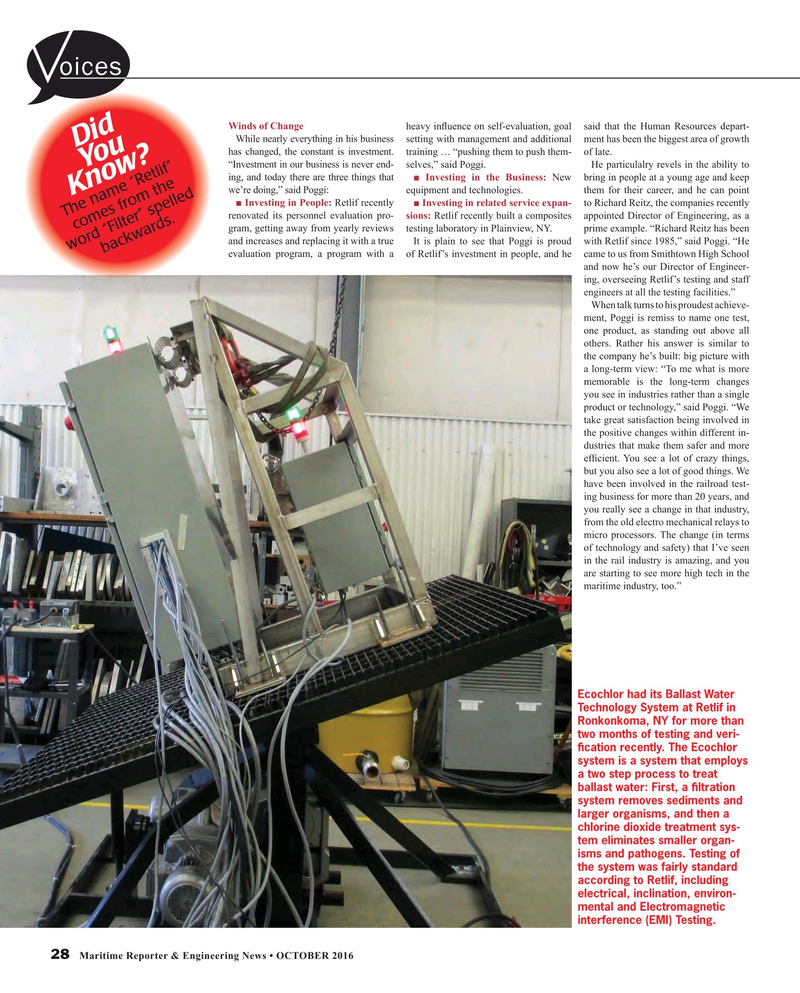 Winds of Change heavy in? uence on self-evaluation, goal said that the Human Resources depart-

Did has changed, the constant is investment. training … “pushing them to push them- of late. “Investment in our business is never end- selves,” said Poggi. He particulalry revels in the ability to

You ing, and today there are three things that ¦ Investing in the Business: New bring in people at a young age and keep we’re doing,” said Poggi: equipment and technologies. them for their career, and he can point

The name “Retlif” renovated its personnel evaluation pro- sions: Retlif recently built a composites appointed Director of Engineering, as a comes from the gram, getting away from yearly reviews testing laboratory in Plainview, NY. prime example. “Richard Reitz has been and increases and replacing it with a true It is plain to see that Poggi is proud with Retlif since 1985,” said Poggi. “He word “Filter” spelled backwards.

evaluation program, a program with a of Retlif’s investment in people, and he came to us from Smithtown High School and now he’s our Director of Engineer- ing, overseeing Retlif’s testing and staff engineers at all the testing facilities.”

When talk turns to his proudest achieve- ment, Poggi is remiss to name one test, one product, as standing out above all others. Rather his answer is similar to the company he’s built: big picture with a long-term view: “To me what is more memorable is the long-term changes you see in industries rather than a single product or technology,” said Poggi. “We take great satisfaction being involved in the positive changes within different in- dustries that make them safer and more ef? cient. You see a lot of crazy things, but you also see a lot of good things. We have been involved in the railroad test- ing business for more than 20 years, and you really see a change in that industry, from the old electro mechanical relays to micro processors. The change (in terms of technology and safety) that I’ve seen in the rail industry is amazing, and you are starting to see more high tech in the maritime industry, too.”

Ecochlor had its Ballast Water

Technology System at Retlif in

Ronkonkoma, NY for more than two months of testing and veri- ? cation recently. The Ecochlor system is a system that employs a two step process to treat ballast water: First, a ? ltration system removes sediments and larger organisms, and then a chlorine dioxide treatment sys- tem eliminates smaller organ- isms and pathogens. Testing of the system was fairly standard according to Retlif, including electrical, inclination, environ- mental and Electromagnetic interference (EMI) Testing.