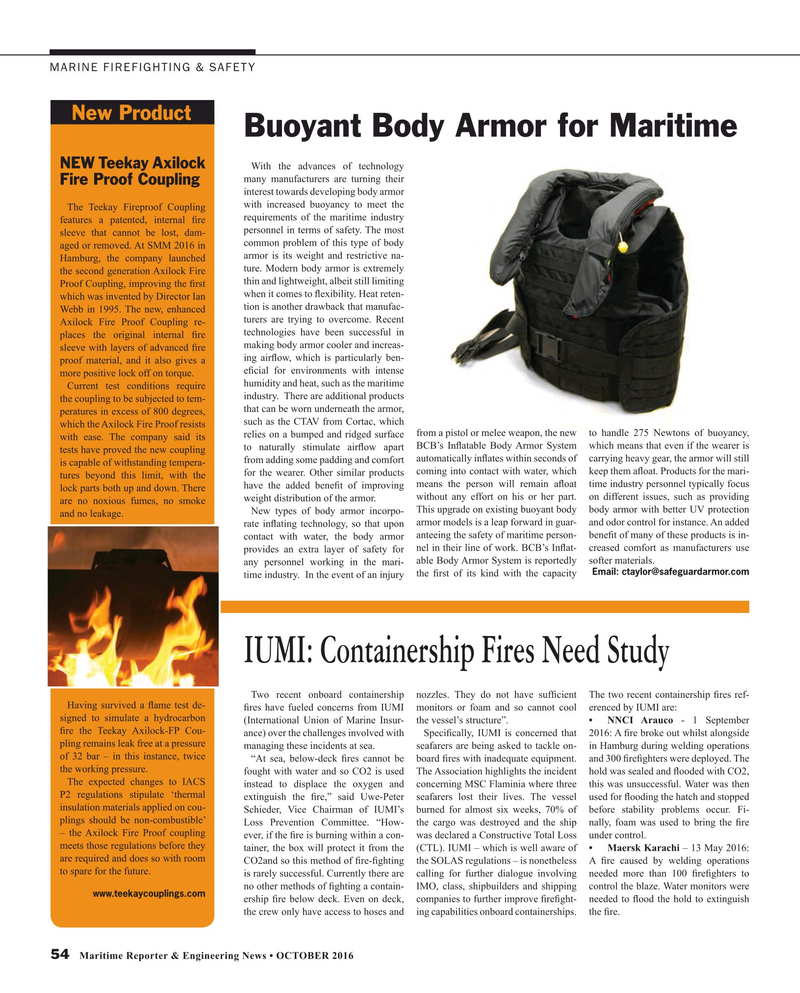 With the advances of technology many manufacturers are turning their

The Teekay Fireproof Coupling requirements of the maritime industry features a patented, internal ? re personnel in terms of safety. The most sleeve that cannot be lost, dam- common problem of this type of body aged or removed. At SMM 2016 in armor is its weight and restrictive na-

Proof Coupling, improving the ? rst when it comes to ? exibility. Heat reten- which was invented by Director Ian tion is another drawback that manufac-

Webb in 1995. The new, enhanced turers are trying to overcome. Recent

Axilock Fire Proof Coupling re- technologies have been successful in places the original internal ? re making body armor cooler and increas- sleeve with layers of advanced ? re ing air? ow, which is particularly ben- proof material, and it also gives a e? cial for environments with intense more positive lock off on torque.

humidity and heat, such as the maritime

Current test conditions require industry. There are additional products the coupling to be subjected to tem- that can be worn underneath the armor, peratures in excess of 800 degrees, such as the CTAV from Cortac, which which the Axilock Fire Proof resists relies on a bumped and ridged surface from a pistol or melee weapon, the new to handle 275 Newtons of buoyancy, with ease. The company said its to naturally stimulate air? ow apart BCB’s In? atable Body Armor System which means that even if the wearer is tests have proved the new coupling from adding some padding and comfort automatically in? ates within seconds of carrying heavy gear, the armor will still is capable of withstanding tempera- for the wearer. Other similar products coming into contact with water, which keep them a? oat. Products for the mari- tures beyond this limit, with the have the added bene? t of improving means the person will remain a? oat time industry personnel typically focus lock parts both up and down. There without any effort on his or her part. on different issues, such as providing weight distribution of the armor.

are no noxious fumes, no smoke

New types of body armor incorpo- and no leakage.

rate in? ating technology, so that upon armor models is a leap forward in guar- and odor control for instance. An added contact with water, the body armor anteeing the safety of maritime person- bene? t of many of these products is in- provides an extra layer of safety for nel in their line of work. BCB’s In? at- creased comfort as manufacturers use able Body Armor System is reportedly softer materials. any personnel working in the mari-

Email: [email protected] time industry. In the event of an injury the ? rst of its kind with the capacity

Having survived a ? ame test de- ? res have fueled concerns from IUMI monitors or foam and so cannot cool erenced by IUMI are: signed to simulate a hydrocarbon (International Union of Marine Insur- the vessel’s structure”. • NNCI Arauco - 1 September ? re the Teekay Axilock-FP Cou- ance) over the challenges involved with Speci? cally, IUMI is concerned that 2016: A ? re broke out whilst alongside pling remains leak free at a pressure managing these incidents at sea. seafarers are being asked to tackle on- in Hamburg during welding operations of 32 bar – in this instance, twice “At sea, below-deck ? res cannot be board ? res with inadequate equipment. and 300 ? re? ghters were deployed. The the working pressure. fought with water and so CO2 is used The Association highlights the incident hold was sealed and ? ooded with CO2,

The expected changes to IACS instead to displace the oxygen and concerning MSC Flaminia where three this was unsuccessful. Water was then

Schieder, Vice Chairman of IUMI’s burned for almost six weeks, 70% of before stability problems occur. Fi- plings should be non-combustible’

Loss Prevention Committee. “How- the cargo was destroyed and the ship nally, foam was used to bring the ? re – the Axilock Fire Proof coupling ever, if the ? re is burning within a con- was declared a Constructive Total Loss under control.

meets those regulations before they tainer, the box will protect it from the (CTL). IUMI – which is well aware of • Maersk Karachi – 13 May 2016: are required and does so with room

CO2and so this method of ? re-? ghting the SOLAS regulations – is nonetheless A ? re caused by welding operations to spare for the future.

is rarely successful. Currently there are calling for further dialogue involving needed more than 100 ? re? ghters to no other methods of ? ghting a contain- IMO, class, shipbuilders and shipping control the blaze. Water monitors were www.teekaycouplings.com ership ? re below deck. Even on deck, companies to further improve ? re? ght- needed to ? ood the hold to extinguish the crew only have access to hoses and ing capabilities onboard containerships. the ? re.