On 31 July, the US Coast Guard published a notice in the Federal Register stating that it is seeking comments on a draft policy letter that, if adopted, would establish the Coast Guard’s policy for acceptance of type-approval testing protocols for ballast water management systems (BWMSs) that render nonviable organisms in ballast water and may be used in addition to the methods under existing regulations.  This policy would include the process for incorporating accepted protocols into the type-approval procedures established under existing regulations; the acceptance of laboratories to evaluate applicable treatment technologies; and the certification of BWMSs that render nonviable organisms in ballast water.  The comment period closes on 30 September, which seems like a short period in which to consider issues of such consequence to the marine industry, but this is the maximum comment period allowed by the Vessel Incidental Discharge Act (VIDA).

The purposes of VIDA are: (1) to provide for the establishment of uniform, environmentally sound standards and requirements for the management of discharges incidental to the normal operation of a vessel; (2) to charge the Environmental Protection Agency (EPA) with primary responsibility for establishing standards relating to the discharge of pollutants from vessels; (3) to charge the Coast Guard with primary responsibility for prescribing, administering, and enforcing regulations, consistent with the discharge standards established by the EPA, for the design, construction, installation, and operation of the equipment and management practices required onboard vessels; and (4) to preserve the flexibility of States, political subdivisions, and certain regions with respect to the administration and enforcement of standards relating to the discharge of pollutants from vessels engaged in maritime commerce and transportation.

With regard to ballast water issues, the statutory provisions are more specific and give the Coast Guard the lead in establishing standards.  Special standards are addressed for vessels with empty ballast tanks.  Vessels that have already installed BWMSs will, with certain limitations, be grandfathered so long as their current systems are maintained in proper working condition, are maintained and used in accordance with manufacturer specifications, continue to meet discharge standards applicable to the vessel at the time of installation, and have in effect a valid type-approval certificate issued by the Coast Guard.  For ballast water discharge purposes, the terms ‘live’ and ‘living’ shall not include an organism that has been rendered nonviable or preclude the consideration of any method of measuring the concentration of organisms in ballast water that are capable of reproduction.

The Coast Guard, in consultation with the EPA and in coordination with the Aquatic Nuisance Species Task Force, is also charged with establishing a framework for federal and intergovernmental response to aquatic nuisance species risks from discharges from vessels, including the introduction, spread, and establishment of such populations.

This particular statement in the draft policy letter is curious since the IMO and the vast majority of the maritime community (other than the USCG and the EPA) accept the MPN method as one of the best available scientific methods for determining the efficacy of BWMSs.  The purpose of the policy letter is to establish the process be used by the Coast Guard for accepting type-approval testing protocols.
The instructions for submitting testing protocols are extensive and specific.  It is beyond my limited range of knowledge and experience to comment on those instructions, other than to note the confusion engendered by the apparent contradiction between the VIDA-directed approach toward MPN

The changes to the US ballast water management system regime promise common-sense reform and improved international consistency.  Hopefully, the Coast Guard can implement these changes in a smooth, logical, and open process. 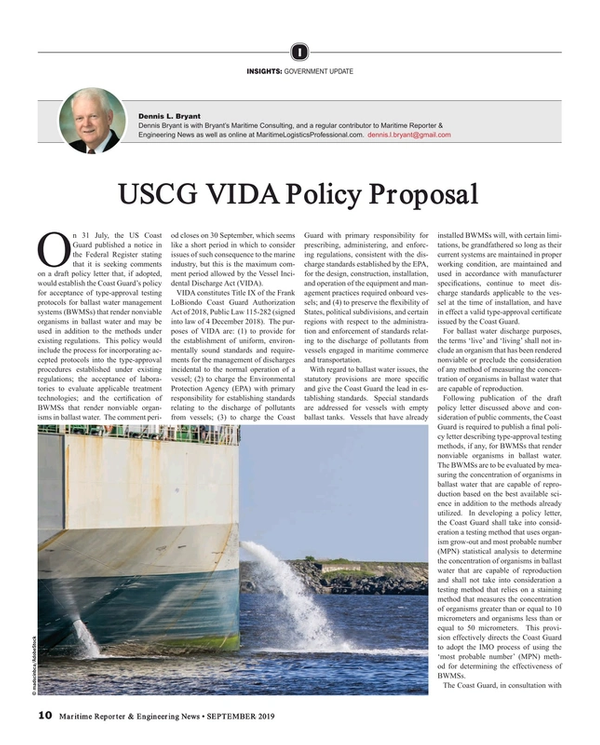