Engineering Ethics, Seaworthiness and the Right of Clients to Kill Themselves

I had only been working as a graduate engineer for a few years and was minding my own business working for a yacht designer when my boss asked me to get in touch with a person who was looking for engineering analysis. I called the number and arranged for the person to meet me at the office.

A few days later a tall very athletic man walked up the stairs and introduced himself as Ned Gillette. He unfolded a drawing with a design for a rowboat, and said he intended to use it for a row from South America to Antarctica.

I was young, but sufficiently surprised to answer somewhere along the lines of: “And you are obviously suicidal.”

“Far from it”, Ned replied, “I want to stay alive and need somebody to do some analysis on this design. We expect the boat will capsize a couple of times and we have inverted the boat and know it will come back, but we need an engineer to take a closer look to make sure we are not missing anything. Your boss told me you might want to do it because it is so interesting.”

“Wait a minute, my boss gave it to me because he is not charging me for this work? So I am supposed to help you kill yourself in Drake Passage for free?”

“Well”, Ned said, “I make my living doing adventures like this. I don’t have any money, but I am a rep for the Northface and I am sure I can comp you for some nice camping gear.”

I did need a new tent and I was sufficiently interested to dive in. I fired up the IBM XT hydro software and managed to wrap my head around inverted stability with loose objects and people in the cabin and other people possibly floating on the outside trying to right the boat, or simply wash away and die from hypothermia and prepared a risk analysis and had some suggestions.

Ned was very pleased with the suggestions and supplied me with a top of the line tent and left. I actually never saw the boat, and never saw Ned again.

Soon thereafter I ran into the Engineering Code of Ethics. It was new to me, but I realized that possibly I had violated the Code because I had actually worked on the design of something that was really dangerous. I was not yet licensed, but it gave me pause for thought.

There were two issues that worried me. First, should I have refused to do the work because I could not make it reasonably safe? I have since spent more time thinking about that and realize now that reasonably safe is a complicated issue and depends on who uses the object. In this case there was an adventurer who only was putting himself and his volunteer crew at risk (there was a crew of four total) and I had clearly conveyed that I could not make his trip safe, I could only make it safer, but that is pretty good by itself.

Next, I took a closer look at the Code and concluded that the ethics contract is not so much between the Engineer and the Client, but rather between the Engineer and the Public. The central issue in an Engineer’s Code of Ethics is to protect the Public. As such, if an individual wants to face death in Drake Passage, that by itself, does not violate the Code of Ethics. Having said that, there can be a moment, when death or injury occurs, that a wife or child will sue the engineer. Even in my youthful innocence I sensed that, because in the recommendation I clearly wrote that the trip would be very dangerous and all I could do was possibly make it a little safer. Maybe not a perfect defense, but at least a decent one.

At that time, I was also contacted by single handed ocean racers, and weirdly I shied away from getting involved in the design of single-handed racers. I now know what my gut was telling me; single handed ocean racing involves a different type of risk and involves the public safety. While a single handed ocean racer should be free to kill himself, they engage in a different type of unseaworthiness. The single handed racer cannot stay awake at all times and therefore these vessels operate without a proper watch for much of the time. As such, they could be a significant factor in a collision with a more innocent vessel. (All vessels should keep proper lookouts, but sometimes a vessel becomes disabled and the maritime adventure then counts on the other vessel to avoid collisions) A single handed vessel is intentionally unseaworthy and the designer would be complicit in creating it. Moreover, single handed racers are quite likely to be disabled and that puts the worldwide sea rescue services at risk in trying to recover these single handers. Putting these rescuers at risk due to a failure of a seaworthy vessel is a risk we all share, but to put them at risk for the benefit of an intentionally designed unseaworthy vessel is wrong.

One can go deeper down the rabbit hole and ask if Ned Gillette may not have put rescue services at higher risk too. In theory that could be true, but in those days in Drake Passage even calling a rescue service is quite long odds, them coming out is highly unlikely.

Regardless, everybody was lucky I suppose, the boat did capsize three times, but she and crew did make it to Antarctica and Ned survived.

Many years later in the early days of the internet, after my tent had pretty much worn out, I wondered whatever happened to Ned Gilette. I did a google search and discovered that in 1998 he and his wife decided to go for an extended camping trip in Northern Kashmir. They were attacked by bandits and Ned was shot with a shotgun, but, with his wife, he still managed to fight of the bandits. His wife was also wounded. She survived, but Ned succumbed to his wounds before he could get properly treated. He had asked for a helicopter to take him to safety, but there were none to be had in those mountains. 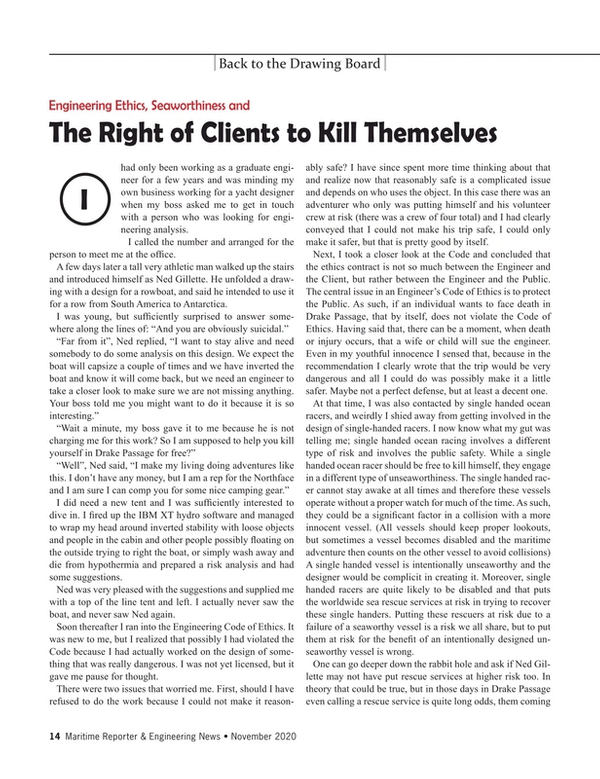 Read Engineering Ethics, Seaworthiness and the Right of Clients to Kill Themselves in Pdf, Flash or Html5 edition of November 2020 Maritime Reporter