General Dynamics Electric Boat will invest $1.7 billion to modernize and upgrade its Quonset, R.I. and Groton, Conn., facilities over the next ten years,” said Sean Davies , vice president for EB’s Quonset Point Operations. “Here at Quonset, we are investing $700 million that will increase our outfitting space by 13 acres, to support work on the Virginia and Columbia class of submarines. When we are complete, we will be adding 600,000 square feet of submarine module outfitting space here on our Rhode Island campus, which represents one of the largest construction projects undertaken in the state in recent years.”

Because the modular sections for the Columbia-class that will be fabricated at Quonset Point will be substantially larger and heavier than previous submarines, the company is building a new and larger ocean transport barge with about 6,000 tons of capacity to transport the modules along the East Coast between Newport News, Groton and Quonset Point. EB also plans to build a new floating drydock to accommodate the new Columbia class subs.

The Groton shipyard is also undergoing a major expansion. The new 200,000-sq. ft. South Yard Assembly building will eventually be the home of 1,400 skilled shipbuilders who will deliver the Columbia-class, and is part of an $850 million expansion at the EB Groton shipyard.

Electric Boat is experiencing significant hiring of designers, engineers, trade and industrial skilled employees to support the growth and expansion. In 2020, EB hired 2,000 people, mostly in the second half of the year due to earlier COVID limitations. In 2021, the company expects to hire 2,400 engineers, tradesmen and support personnel.

Led by the Southeastern New England Defense Industry Alliance (SENEDIA), a next-generation industry partnership supported by workforce development stakeholders, including state workforce agencies, academic institutions, training providers, and Manufacturing Extension Partnerships and Procurement Technical Assistance Centers in Connecticut, Massachusetts and Rhode Island are helping develop the qualified workforce that will design and build the submarines of today and the future. This effort is in the process of expanding to all the New England states.

Bond points to EB’s “pipeline partnerships” in both Connecticut and Rhode Island that helps to develop qualified, skilled and available personnel. “Our partners provide the basic skills in the trades for our new hires so they can be productive as soon as they set foot in the shipyard. This has been critical not only in building skills, but also dramatically reducing our first-year attrition. In most cases, we’ve been able to cut our first-year attrition in half because of the way we onboard them and introduce them to shipbuilding.” 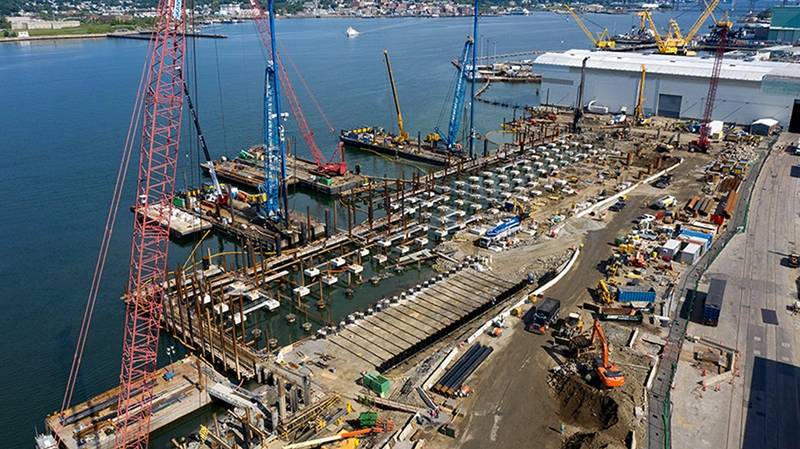 “We will put more than 1,000 people through those pipelines in Rhode Island, and we have a parallel pipeline in Connecticut,” said Davies. Our training programs used to focus on either Connecticut or Rhode Island, but SENEDIA brings a cross state and regional perspective, so we can expand into Massachusetts and further into New England.”

Developing skilled talent to design, build and repair ships requires partners. SENEDIA was awarded an $18.6 million contract in August 2020 from the Department of Defense to develop the Next Generation Submarine Shipbuilding Supply Chain Partnership, a robust New England regional workforce development program that will serve the needs of submarine shipbuilding employers and open up job exploration and employment opportunities to more than 5,000 potential workers.

“One of our key goals at SENEDIA is to help engage the next generation workforce so that they see and consider the many high-wage, high-demand, high-growth opportunities, whether STEM or trade/industrial skill related, there are through defense-related career pathways,” said SENEDIA Executive Director Molly Magee. “These careers make a tremendous impact on our national security, and the demand for skilled talent in our sector continues to grow.”

Magee said SENEDIA sees itself as the bridge between companies looking for talent and people looking to learn, train and work. “SENEDIA’s internship program has seen incredible success in kickstarting careers across IT and cybersecurity, engineering, supply chain management, undersea technology, and beyond. More than 90 percent of our interns find a job after graduation, and many with the companies for which they interned. Interns get paid, hands-on, on-the-job work experience, and our host companies get to know and train prospective employees.”

She further emphasized the important role of southeastern New England as the hub of submarine shipbuilding and undersea technology. Defense jobs support the building of the submarine and the technology and design of the systems on submarines and unmanned undersea vehicles. A strong undersea defense helps ensure our national security.

“As part of our DoD award, we launched www.BuildSubmarines.com to serve as a workforce resource, including a talent repository where prospective trade and industrial skilled workers can share their contact information and connect with employers. We have also developed a supplier database, allowing companies who are or could be part of the submarine supply chain, to highlight their company and capabilities. In our latest effort through the Submarine Shipbuilding Supply Chain Partnership, we have initiated an incumbent worker training reimbursement program, which will reimburse supply chain companies 100 percent of trade and industrial skill training costs, up to $30,000,” Magee said. “This is an investment in the individual employee today, and in the strength of our industry tomorrow, as many of these skills are transferable and are essential to the continued growth of submarine shipbuilding.” 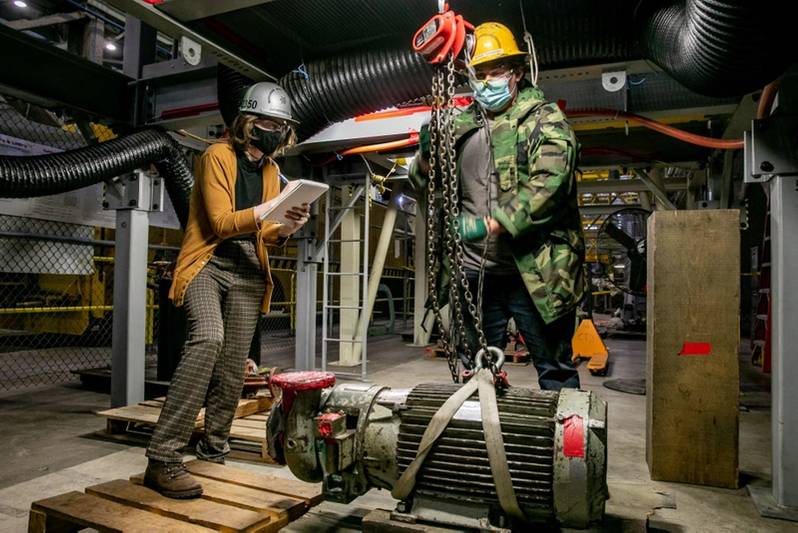 New talent, toolsWhile ship builders and repair yards have always been concerned with training new workers, the challenge today is especially acute because senior level workers are retiring, and, as a group, the current workforce lacks the appropriate array of digital skills to fully utilize the next generation of tools, said retired Rear Adm. Brad Williamson, the executive director of the Hampton Roads Maritime Industrial Base Ecosystem (MIBE).

“The new workers who will build Columbia-class submarines when that program is at full rate production are in now middle school. These same workers will need to be trained in modern equipment and will also need these skills to build the new unmanned and autonomous platforms that are expected to make up a larger and larger portion of our fleet in the years ahead,” Williamson said. “These skills require the adoption of the latest technology, not only in the shipyards and ship repair facilities, but in the training pipelines that produce these workers.”

Plus, Williamson said, the maritime industry is competing with other industries for talent. “In Hampton Roads, we face current and future hiring competition both for specific skills and for general personnel who might choose to enter the maritime trades. This includes non-naval maritime projects such as Hampton Roads Bridge-Tunnel Expansion, offshore wind infrastructure and construction, and other industries in the region.

On the Public side, Williamson said that the Norfolk Naval Shipyard is overhauling its training program and facilities and has done a remarkable job at better understanding the competencies required for each availability and where those skills lie within their workforce, and then most importantly, getting after the delta up front to ensure they have the right workforce in place once the availability starts. “MIBE is partnered with NAVSEA on working to create alignment with the skillsets between the private and public side. This is not an easy task, but a worthy effort to see how much alignment we can achieve. Some of the larger forward-leaning private maritime yards have invested in their own training pipelines, but this is not necessarily an option for smaller repair facilities.”

MIBE focuses extensively on building better linkages with middle school and high school programs to bring maritime trades into view. “We partner with our Virginia Digital Shipbuilding Program which does extensive STEM outreach and we have proposals pending for Congressional approval that would provide funding to support maritime trades training in these school systems specifically designed to assist those in underserved communities,” Williamson said. “Our message is quite simple, these maritime trades can provide not just a job, but a long-term career and the chance for continued growth and opportunity.”

With the demand for skilled employees in the maritime trades, there is competition between the government and industry for talent, as well as other fleet concentration areas or naval shipbuilders beyond the Tidewater region. “This is why our current efforts with NAVSEA are so important,” said Williamson. “The goal is to someday have a workforce that could theoretically flow across public-private lines so that one unified workforce could meet Navy demands in the most efficient manner possible.”

Life-changing opportunities
Starting a career in the maritime trades can be life changing. So, Pearl Harbor Naval Shipyard engineer Lauryn-Mae Pang has some advice for young people looking for a career: “Change it up!”

She is a product of the Pearl Harbor Naval Shipyard – Intermediate Maintenance Facility (PHNSY-IMF) Apprenticeship Training Program, which is certified by the U.S. Department of Labor and administered through a contract between Honolulu Community College. PHNSY’s 2019 class was its biggest ever, with 278 graduates. The 2020 class, the 100th anniversary of the program, had 208 graduates, bringing the total number of apprentices to 5,800 since the program began. Apprentices received a minimum of 7,200 hours of on-the-job training, trade theory, and academic study during the program. Upon successful completion of the program, apprentices receive an Associate in Applied Science (A.A.S) Degree in Applied Trades and are promoted to journey workers in trades such as structural, mechanical, electrical/electronic, piping, air conditioning and refrigeration, and temporary services. Apprentices spend half the day in the classroom and the other half working with their shop.

Pang was working multiple jobs, when she saw the announcement of the Shipyard Job Fair. I was able to talk to people from the different shops about the various trades. I applied to take the test, passed it and went through the interview process, and was accepted to the program,” she said.

Pang said it was a little overwhelming at first. “I didn’t know anything about being a diesel crane mechanic. But the shipyard really took me in and taught me all the skills that I would need, and not just for that job, but a lot of other things.

Pang learned about the Apprentice to Engineer (A2E) program, where qualified and motivated Apprentice Program graduates can pursue a four-year engineering degree with her tuition and related educational fees paid by the Navy.

“Since I entered the apprenticeship program to have a career, this seemed like a good next step. It was a big motivator for me,” said Pang.

Ten years later, Pang attended the University of Hawaii at Manoa College of Engineering and earned her Bachelor of Engineering Degree. “After I got my degree, I was assigned to work with the nuclear engineers in Code 2320. They’re involved with anything involved with nuclear submarine propulsion. I recently transferred to 2310 and working on the structural side of nuclear engineering.”

Even now she receives a significant amount of training, like everyone else at the yard. “It’s something that never stops.”

Pang said the knowledge and skills she’s received have been invaluable. “I started when I was 29. I’ve accomplished a lot in ten years,” she said. “If I could have done it differently, I would have done it a lot sooner.”

She doesn’t hesitate to recommend the apprenticeship program to someone with some confidence, curiosity and drive. “Take the risk. Try it out. Trust the process. Take in what the shipyard has to offer. I didn’t think that as a diesel crane mechanic doing small jobs that I would eventually become a nuclear mechanical engineer working on entire propulsion systems. So, just go out there and do it! Change it up!” 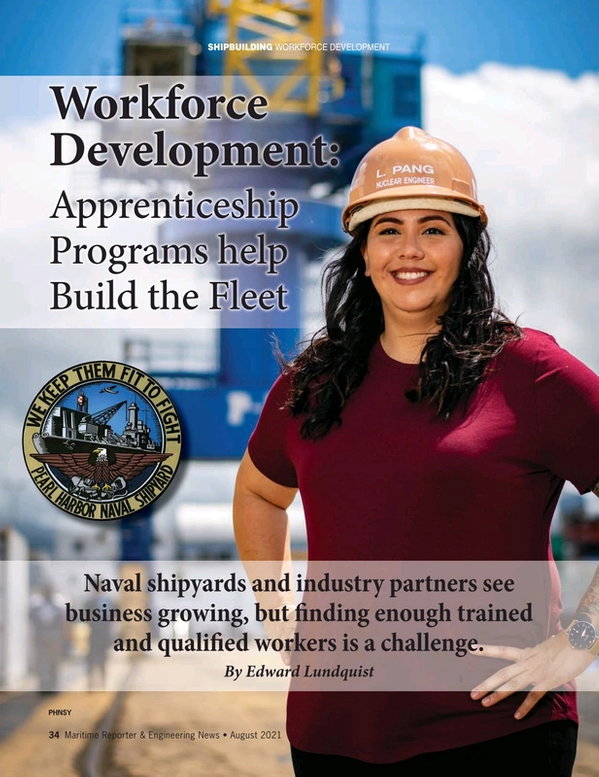