The United States stands poised on the edge of a bright energy future. After decades of decreasing domestic energy production and increasing reliance on foreign sources of oil and natural gas, a revolution in production has positioned this nation to become a net energy exporter by 2017, according to the International Energy Agency. It seems the future is bright and promising for U.S. energy security, yet this promise is under threat from unrealistic fears and overstated risks.
Policy makers must understand the true dynamics at play in the energy sector so they can make informed decisions. If not, we risk squandering the opportunity being presented to us. For example, this July, the US Bureau of Ocean Energy Management (BOEM) issued a record of decision (ROD) for environmental review of geological and geophysical (G&G) survey activities offshore the Atlantic Coast. This regulatory move means that the United States Department of the Interior’s next 5-year Outer Continental Shelf (OCS) oil and gas program will likely include fresh G&G data for the Atlantic OCS.
This opens the door to a vital data-collection activity that has been kept off the table for more than 30 years. The Obama Administration deserves applause for taking this vital first step toward accurately assessing the resources of this new offshore area. However, some voices in the debate are making wildly inaccurate assertions about the risks involved. In addition, the federal government is mandating companies take unnecessarily costly steps to prevent worst case scenarios their own science deems virtually impossible. So, maybe only one-handed applause is appropriate.
Why is G&G, also known as seismic, data so important? Simply put, before any drilling for oil and natural gas can take place, it is first critically important to determine where the hydrocarbon reserves are located. Seismic surveys send sound waves through the water column and into the sea floor. This is similar to ultra-sound used in medical exploration. Based on how they are reflected back to the surface, complex computer calculations make determinations of possibly where the reserves are and whether they can be reached economically and safely.
For over three decades, this simple data collection activity has been off-limits in the Atlantic and much of the rest of the Nation’s OCS, though it has been used safely in parts of the Gulf of Mexico and around the world. As policy makers debate on whether to allow oil and natural gas production in areas such as the South Atlantic OCS, new data would be helpful, but not necessary. This new data must be aggregated and analyzed through modern seismic surveys. The Administration rightly calls for decision making about whether and how to proceed with such surveys to be based on sound science.
Opponents of offshore energy production have waged a full-on information war to prevent the permitting of these vital seismic activities, and adherence to actual facts does not seem to stand in their way. Many environmental groups committed to denying the American people access to their own domestic energy resources have made the wild assertion that seismic surveys are 100,000 times louder than a jet engine, threatening marine life.
This is absolutely untrue. First, Government scientists estimate the sound level of seismic acquisition is closer to one jet engine in volume. Second, contrary to environmentalist claims that over 138,000 whales and dolphins could be injured by seismic activity in the Atlantic, seismic surveys have been conducted for over thirty years around the world, including the Gulf of Mexico, and BOEM has found no documented indication of adverse impacts on marine animal populations or coastal communities.
It is more likely that the hyperbole from some environmental groups has injured hundreds of thousands of coastal residents by opposing energy development and denying communities affordable energy, well-paying jobs and billions of dollars in government revenue.
The ROD calls for the use of stringent mitigation measures, supposedly to minimize impact on marine life. These mitigation measures may be unduly restrictive; however, since the ROD establishes an unrealistic ‘worst case’ that BOEM has since admitted will not actually occur. As a result, the ROD is mandating mitigation measures that are not supported by science. This will impose serious burdens on industry, likely discourage exploration of the Atlantic, and will result in no benefits to protected species. This approach is contrary to both the best available scientific information and applicable law.
The truth is that seismic surveys have been conducted safely for decades, and industry already routinely implements a suite of measures to mitigate potential impacts to marine animals. The best science and research, including the Department of Interior’s own studies, show that seismic surveys have little to no effect on marine mammal populations. Government scientists acknowledge this, and dispute the hyperbolic claims of environmentalists in BOEM’s Science Notes of August 22, 2014.
Regulators should rely only on sound science when setting permit requirements. The stakes — for the offshore industry, the nation’s domestic energy production, the strength of the overall economy, and the jobs that hang in the balance — demand no less. 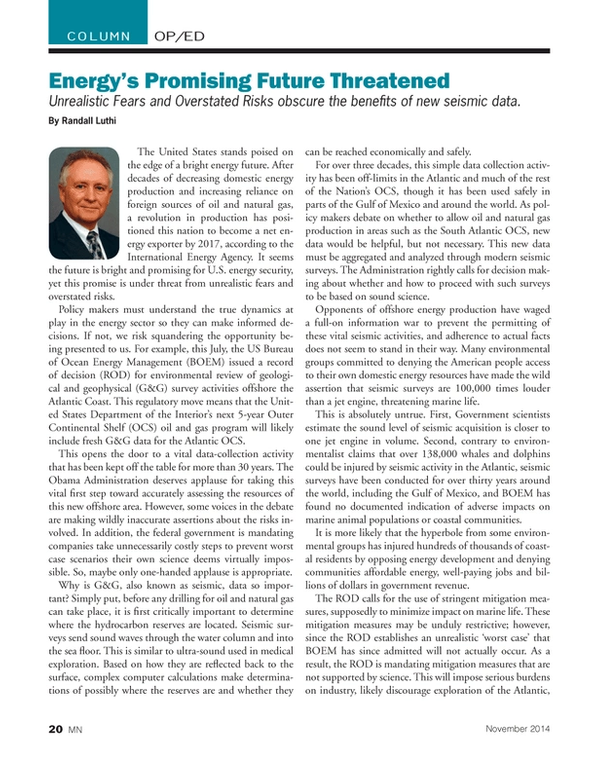