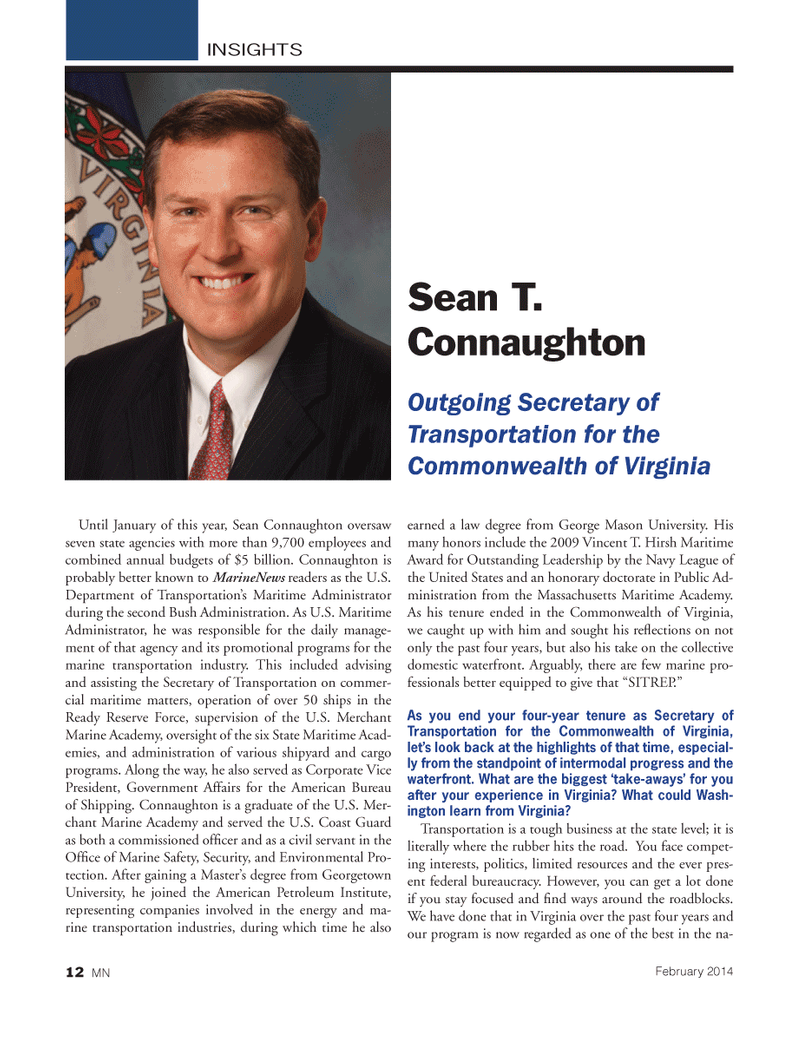 INSIGHTSUntil January of this year, Sean Connaughton oversaw seven state agencies with more than 9,700 employees and combined annual budgets of $5 billion. Connaughton is probably better known to MarineNews readers as the U.S. Department of Transportation?s Maritime Administrator during the second Bush Administration. As U.S. Maritime Administrator, he was responsible for the daily manage- ment of that agency and its promotional programs for the marine transportation industry. This included advising and assisting the Secretary of Transportation on commer- cial maritime matters, operation of over 50 ships in the Ready Reserve Force, supervision of the U.S. Merchant Marine Academy, oversight of the six State Maritime Acad- emies, and administration of various shipyard and cargo programs. Along the way, he also served as Corporate Vice President, Government Affairs for the American Bureau of Shipping. Connaughton is a graduate of the U.S. Mer- chant Marine Academy and served the U.S. Coast Guard as both a commissioned of cer and as a civil servant in the Of ce of Marine Safety, Security, and Environmental Pro- tection. After gaining a Master?s degree from Georgetown University, he joined the American Petroleum Institute, representing companies involved in the energy and ma- rine transportation industries, during which time he also earned a law degree from George Mason University. His many honors include the 2009 Vincent T. Hirsh Maritime Award for Outstanding Leadership by the Navy League of the United States and an honorary doctorate in Public Ad- ministration from the Massachusetts Maritime Academy. As his tenure ended in the Commonwealth of Virginia, we caught up with him and sought his re ections on not only the past four years, but also his take on the collective domestic waterfront. Arguably, there are few marine pro- fessionals better equipped to give that ?SITREP.? As you end your four-year tenure as Secretary of Transportation for the Commonwealth of Virginia, let?s look back at the highlights of that time, especial- ly from the standpoint of intermodal progress and the waterfront. What are the biggest ?take-aways? for you after your experience in Virginia? What could Wash- ington learn from Virginia? Transportation is a tough business at the state level; it is literally where the rubber hits the road. You face compet- ing interests, politics, limited resources and the ever pres- ent federal bureaucracy. However, you can get a lot done if you stay focused and  nd ways around the roadblocks. We have done that in Virginia over the past four years and our program is now regarded as one of the best in the na- Sean T. ConnaughtonOutgoing Secretary of Transportation for the Commonwealth of Virginia February 2014 12 MNMN FEB14 Layout 1-17.indd 12MN FEB14 Layout 1-17.indd 121/20/2014 10:01:05 AM1/20/2014 10:01:05 AM