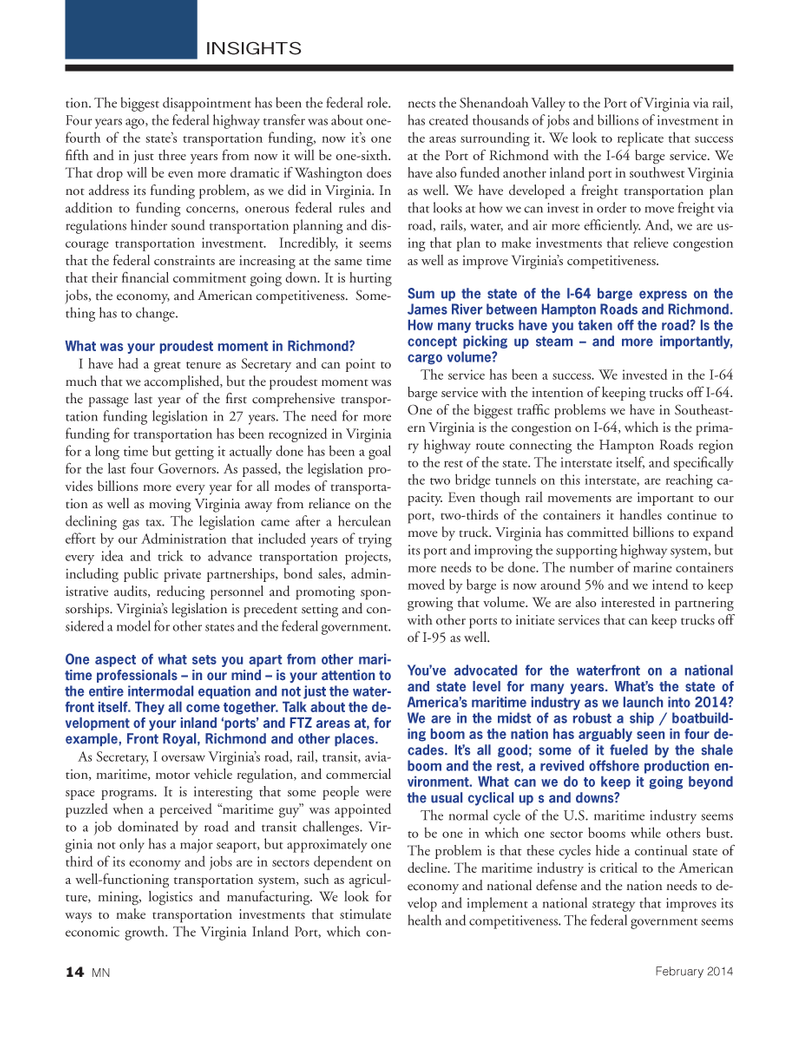 tion. The biggest disappointment has been the federal role. Four years ago, the federal highway transfer was about one- fourth of the state?s transportation funding, now it?s one  fth and in just three years from now it will be one-sixth. That drop will be even more dramatic if Washington does not address its funding problem, as we did in Virginia. In addition to funding concerns, onerous federal rules and regulations hinder sound transportation planning and dis- courage transportation investment. Incredibly, it seems that the federal constraints are increasing at the same time that their  nancial commitment going down. It is hurting jobs, the economy, and American competitiveness. Some- thing has to change.What was your proudest moment in Richmond? I have had a great tenure as Secretary and can point to much that we accomplished, but the proudest moment was the passage last year of the  rst comprehensive transpor- tation funding legislation in 27 years. The need for more funding for transportation has been recognized in Virginia for a long time but getting it actually done has been a goal for the last four Governors. As passed, the legislation pro- vides billions more every year for all modes of transporta- tion as well as moving Virginia away from reliance on the declining gas tax. The legislation came after a herculean effort by our Administration that included years of trying every idea and trick to advance transportation projects, including public private partnerships, bond sales, admin- istrative audits, reducing personnel and promoting spon- sorships. Virginia?s legislation is precedent setting and con- sidered a model for other states and the federal government. One aspect of what sets you apart from other mari- time professionals ? in our mind ? is your attention to the entire intermodal equation and not just the water- front itself. They all come together. Talk about the de- velopment of your inland ?ports? and FTZ areas at, for example, Front Royal, Richmond and other places. As Secretary, I oversaw Virginia?s road, rail, transit, avia- tion, maritime, motor vehicle regulation, and commercial space programs. It is interesting that some people were puzzled when a perceived ?maritime guy? was appointed to a job dominated by road and transit challenges. Vir- ginia not only has a major seaport, but approximately one third of its economy and jobs are in sectors dependent on a well-functioning transportation system, such as agricul- ture, mining, logistics and manufacturing. We look for ways to make transportation investments that stimulate economic growth. The Virginia Inland Port, which con- nects the Shenandoah Valley to the Port of Virginia via rail, has created thousands of jobs and billions of investment in the areas surrounding it. We look to replicate that success at the Port of Richmond with the I-64 barge service. We have also funded another inland port in southwest Virginia as well. We have developed a freight transportation plan that looks at how we can invest in order to move freight via road, rails, water, and air more ef ciently. And, we are us- ing that plan to make investments that relieve congestion as well as improve Virginia?s competitiveness. Sum up the state of the I-64 barge express on the James River between Hampton Roads and Richmond. How many trucks have you taken off the road? Is the concept picking up steam ? and more importantly, cargo volume? The service has been a success. We invested in the I-64 barge service with the intention of keeping trucks off I-64. One of the biggest traf c problems we have in Southeast- ern Virginia is the congestion on I-64, which is the prima- ry highway route connecting the Hampton Roads region to the rest of the state. The interstate itself, and speci cally the two bridge tunnels on this interstate, are reaching ca- pacity. Even though rail movements are important to our port, two-thirds of the containers it handles continue to move by truck. Virginia has committed billions to expand its port and improving the supporting highway system, but more needs to be done. The number of marine containers moved by barge is now around 5% and we intend to keep growing that volume. We are also interested in partnering with other ports to initiate services that can keep trucks off of I-95 as well. You?ve advocated for the waterfront on a national and state level for many years. What?s the state of America?s maritime industry as we launch into 2014? We are in the midst of as robust a ship / boatbuild- ing boom as the nation has arguably seen in four de- cades. It?s all good; some of it fueled by the shale boom and the rest, a revived offshore production en- vironment. What can we do to keep it going beyond the usual cyclical up s and downs?The normal cycle of the U.S. maritime industry seems to be one in which one sector booms while others bust. The problem is that these cycles hide a continual state of decline. The maritime industry is critical to the American economy and national defense and the nation needs to de-velop and implement a national strategy that improves its health and competitiveness. The federal government seems INSIGHTS14 MNFebruary 2014 MN FEB14 Layout 1-17.indd 14MN FEB14 Layout 1-17.indd 141/20/2014 10:01:15 AM1/20/2014 10:01:15 AM