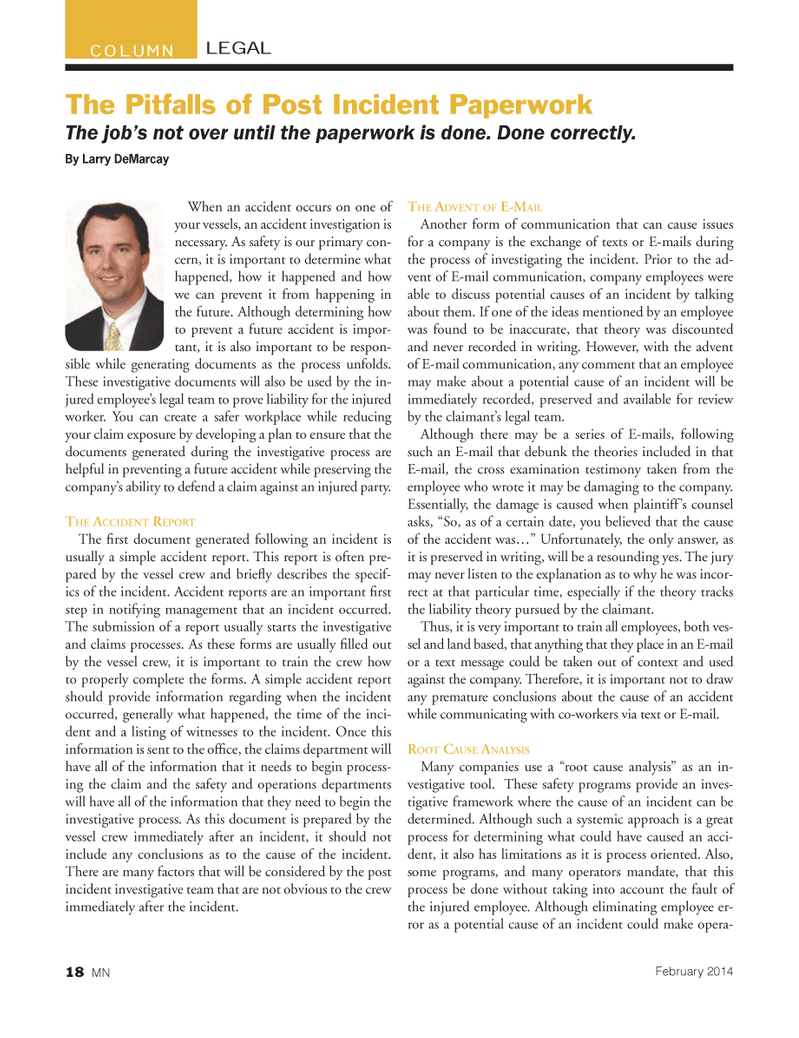 When an accident occurs on one of your vessels, an accident investigation is necessary. As safety is our primary con- cern, it is important to determine what happened, how it happened and how we can prevent it from happening in the future. Although determining how to prevent a future accident is impor- tant, it is also important to be respon- sible while generating documents as the process unfolds. These investigative documents will also be used by the in- jured employee?s legal team to prove liability for the injured worker. You can create a safer workplace while reducing your claim exposure by developing a plan to ensure that the documents generated during the investigative process are helpful in preventing a future accident while preserving the company?s ability to defend a claim against an injured party. THE ACCIDENT REPORT The  rst document generated following an incident is usually a simple accident report. This report is often pre- pared by the vessel crew and brie y describes the specif- ics of the incident. Accident reports are an important  rst step in notifying management that an incident occurred. The submission of a report usually starts the investigative and claims processes. As these forms are usually  lled out by the vessel crew, it is important to train the crew how to properly complete the forms. A simple accident report should provide information regarding when the incident occurred, generally what happened, the time of the inci- dent and a listing of witnesses to the incident. Once this information is sent to the of ce, the claims department will have all of the information that it needs to begin process- ing the claim and the safety and operations departments will have all of the information that they need to begin the investigative process. As this document is prepared by the vessel crew immediately after an incident, it should not include any conclusions as to the cause of the incident. There are many factors that will be considered by the post incident investigative team that are not obvious to the crew immediately after the incident. THE ADVENT OF E-MAILAnother form of communication that can cause issues for a company is the exchange of texts or E-mails during the process of investigating the incident. Prior to the ad- vent of E-mail communication, company employees were able to discuss potential causes of an incident by talking about them. If one of the ideas mentioned by an employee was found to be inaccurate, that theory was discounted and never recorded in writing. However, with the advent of E-mail communication, any comment that an employee may make about a potential cause of an incident will be immediately recorded, preserved and available for review by the claimant?s legal team. Although there may be a series of E-mails, following such an E-mail that debunk the theories included in that E-mail, the cross examination testimony taken from the employee who wrote it may be damaging to the company. Essentially, the damage is caused when plaintiff?s counsel asks, ?So, as of a certain date, you believed that the cause of the accident was?? Unfortunately, the only answer, as it is preserved in writing, will be a resounding yes. The jury may never listen to the explanation as to why he was incor- rect at that particular time, especially if the theory tracks the liability theory pursued by the claimant. Thus, it is very important to train all employees, both ves- sel and land based, that anything that they place in an E-mail or a text message could be taken out of context and used against the company. Therefore, it is important not to draw any premature conclusions about the cause of an accident while communicating with co-workers via text or E-mail. ROOT CAUSE ANALYSIS Many companies use a ?root cause analysis? as an in- vestigative tool. These safety programs provide an inves- tigative framework where the cause of an incident can be determined. Although such a systemic approach is a great process for determining what could have caused an acci- dent, it also has limitations as it is process oriented. Also, some programs, and many operators mandate, that this process be done without taking into account the fault of the injured employee. Although eliminating employee er- ror as a potential cause of an incident could make opera- The Pitfalls of Post Incident PaperworkThe job?s not over until the paperwork is done. Done correctly. By Larry DeMarcay LEGALCOLUMN18 MNFebruary 2014 MN FEB14 Layout 18-31.indd 18MN FEB14 Layout 18-31.indd 181/20/2014 10:02:57 AM1/20/2014 10:02:57 AM