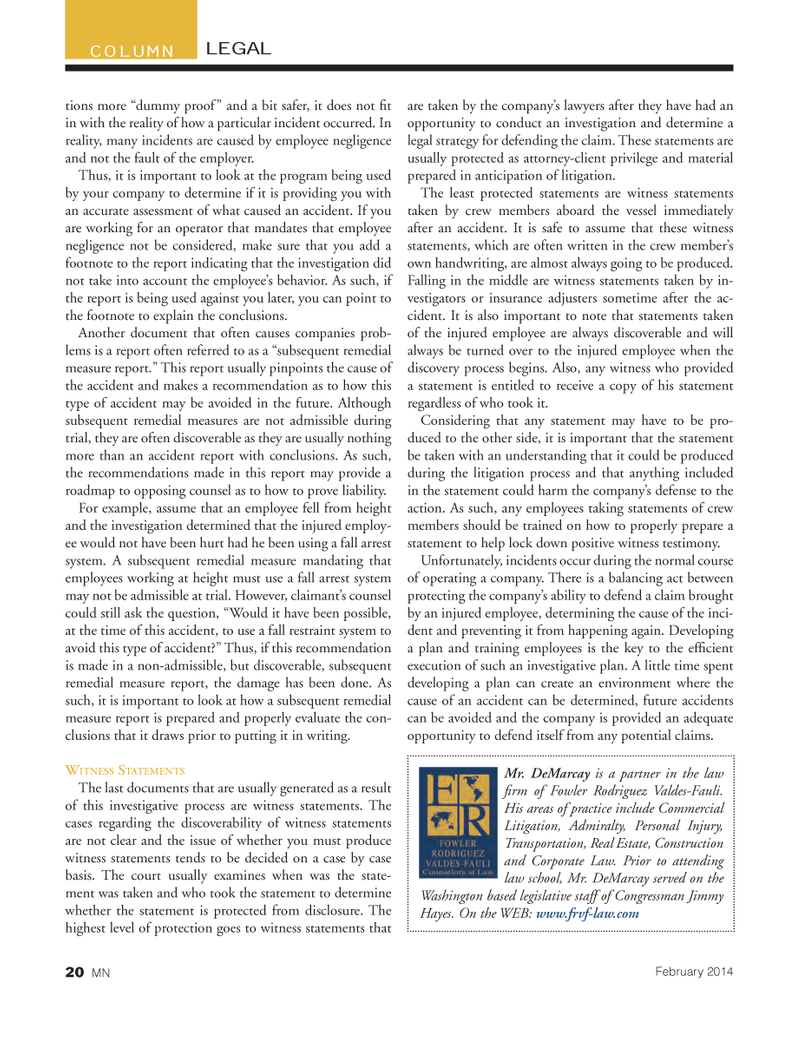 tions more ?dummy proof? and a bit safer, it does not  t in with the reality of how a particular incident occurred. In reality, many incidents are caused by employee negligence and not the fault of the employer. Thus, it is important to look at the program being used by your company to determine if it is providing you with an accurate assessment of what caused an accident. If you are working for an operator that mandates that employee negligence not be considered, make sure that you add a footnote to the report indicating that the investigation did not take into account the employee?s behavior. As such, if the report is being used against you later, you can point to the footnote to explain the conclusions.Another document that often causes companies prob- lems is a report often referred to as a ?subsequent remedial measure report.? This report usually pinpoints the cause of the accident and makes a recommendation as to how this type of accident may be avoided in the future. Although subsequent remedial measures are not admissible during trial, they are often discoverable as they are usually nothing more than an accident report with conclusions. As such, the recommendations made in this report may provide a roadmap to opposing counsel as to how to prove liability. For example, assume that an employee fell from height and the investigation determined that the injured employ- ee would not have been hurt had he been using a fall arrest system. A subsequent remedial measure mandating that employees working at height must use a fall arrest system may not be admissible at trial. However, claimant?s counsel could still ask the question, ?Would it have been possible, at the time of this accident, to use a fall restraint system to avoid this type of accident?? Thus, if this recommendation is made in a non-admissible, but discoverable, subsequent remedial measure report, the damage has been done. As such, it is important to look at how a subsequent remedial measure report is prepared and properly evaluate the con- clusions that it draws prior to putting it in writing. WITNESS STATEMENTS The last documents that are usually generated as a result of this investigative process are witness statements. The cases regarding the discoverability of witness statements are not clear and the issue of whether you must produce witness statements tends to be decided on a case by case basis. The court usually examines when was the state- ment was taken and who took the statement to determine whether the statement is protected from disclosure. The highest level of protection goes to witness statements that are taken by the company?s lawyers after they have had an opportunity to conduct an investigation and determine a legal strategy for defending the claim. These statements are usually protected as attorney-client privilege and material prepared in anticipation of litigation. The least protected statements are witness statements taken by crew members aboard the vessel immediately after an accident. It is safe to assume that these witness statements, which are often written in the crew member?s own handwriting, are almost always going to be produced. Falling in the middle are witness statements taken by in- vestigators or insurance adjusters sometime after the ac- cident. It is also important to note that statements taken of the injured employee are always discoverable and will always be turned over to the injured employee when the discovery process begins. Also, any witness who provided a statement is entitled to receive a copy of his statement regardless of who took it. Considering that any statement may have to be pro- duced to the other side, it is important that the statement be taken with an understanding that it could be produced during the litigation process and that anything included in the statement could harm the company?s defense to the action. As such, any employees taking statements of crew members should be trained on how to properly prepare a statement to help lock down positive witness testimony. Unfortunately, incidents occur during the normal course of operating a company. There is a balancing act between protecting the company?s ability to defend a claim brought by an injured employee, determining the cause of the inci- dent and preventing it from happening again. Developing a plan and training employees is the key to the ef cient execution of such an investigative plan. A little time spent developing a plan can create an environment where the cause of an accident can be determined, future accidents can be avoided and the company is provided an adequate opportunity to defend itself from any potential claims. LEGALCOLUMNMr. DeMarcay is a partner in the law Þ rm of Fowler Rodriguez Valdes-Fauli. His areas of practice include Commercial Litigation, Admiralty, Personal Injury, Transportation, Real Estate, Construction and Corporate Law. Prior to attending law school, Mr. DeMarcay served on the Washington based legislative staff of Congressman Jimmy Hayes. On the WEB: www.frvf-law.com February 2014 20 MNMN FEB14 Layout 18-31.indd 20MN FEB14 Layout 18-31.indd 201/20/2014 10:03:09 AM1/20/2014 10:03:09 AM