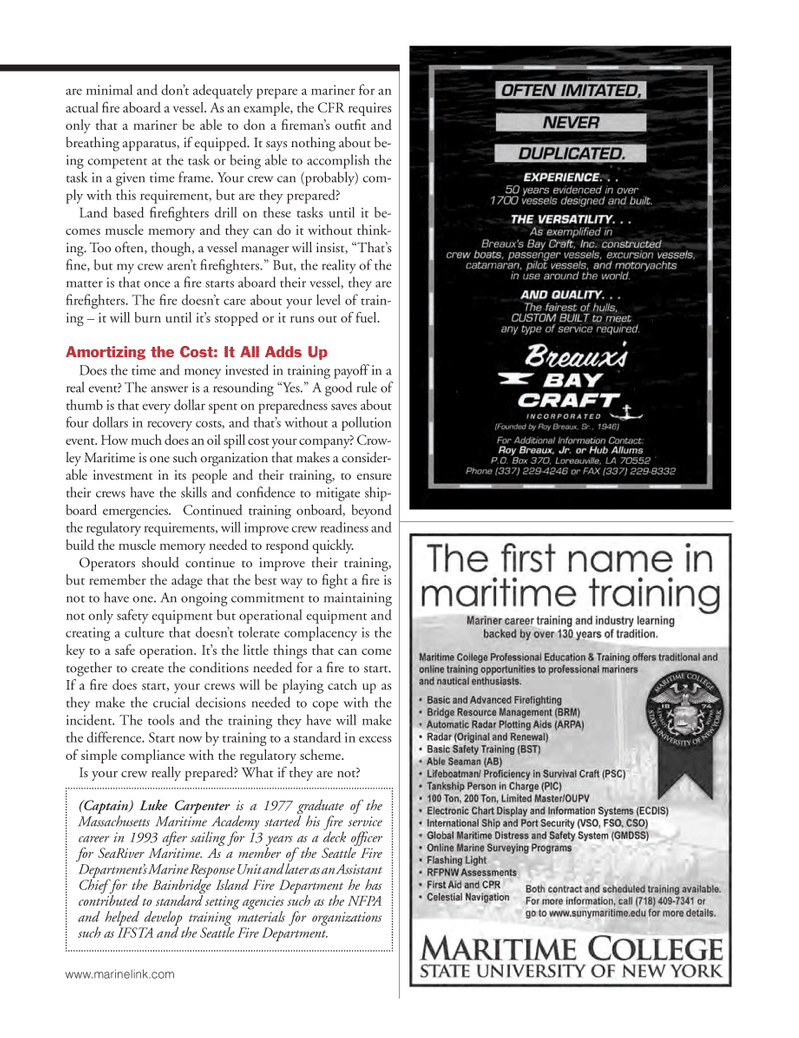 are minimal and don?t adequately prepare a mariner for an actual  re aboard a vessel. As an example, the CFR requires only that a mariner be able to don a  reman?s out t and breathing apparatus, if equipped. It says nothing about be- ing competent at the task or being able to accomplish the task in a given time frame. Your crew can (probably) com- ply with this requirement, but are they prepared? Land based  re ghters drill on these tasks until it be- comes muscle memory and they can do it without think- ing. Too often, though, a vessel manager will insist, ?That?s  ne, but my crew aren?t  re ghters.? But, the reality of the matter is that once a  re starts aboard their vessel, they are  re ghters. The  re doesn?t care about your level of train- ing ? it will burn until it?s stopped or it runs out of fuel. Amortizing the Cost: It All Adds UpDoes the time and money invested in training payoff in a real event? The answer is a resounding ?Yes.? A good rule of thumb is that every dollar spent on preparedness saves about four dollars in recovery costs, and that?s without a pollution event. How much does an oil spill cost your company? Crow- ley Maritime is one such organization that makes a consider- able investment in its people and their training, to ensure their crews have the skills and con dence to mitigate ship- board emergencies. Continued training onboard, beyond the regulatory requirements, will improve crew readiness and build the muscle memory needed to respond quickly. Operators should continue to improve their training, but remember the adage that the best way to  ght a  re is not to have one. An ongoing commitment to maintaining not only safety equipment but operational equipment and creating a culture that doesn?t tolerate complacency is the key to a safe operation. It?s the little things that can come together to create the conditions needed for a  re to start. If a  re does start, your crews will be playing catch up as they make the crucial decisions needed to cope with the incident. The tools and the training they have will make the difference. Start now by training to a standard in excess of simple compliance with the regulatory scheme. Is your crew really prepared? What if they are not? (Captain) Luke Carpenter is a 1977 graduate of the Massachusetts Maritime Academy started his Þ re service career in 1993 after sailing for 13 years as a deck ofÞ cer for SeaRiver Maritime. As a member of the Seattle Fire DepartmentÕs Marine Response Unit and later as an Assistant Chief for the Bainbridge Island Fire Department he has contributed to standard setting agencies such as the NFPA and helped develop training materials for organizations such as IFSTA and the Seattle Fire Department. www.marinelink.com MN FEB14 Layout 18-31.indd 31MN FEB14 Layout 18-31.indd 311/20/2014 10:04:45 AM1/20/2014 10:04:45 AM