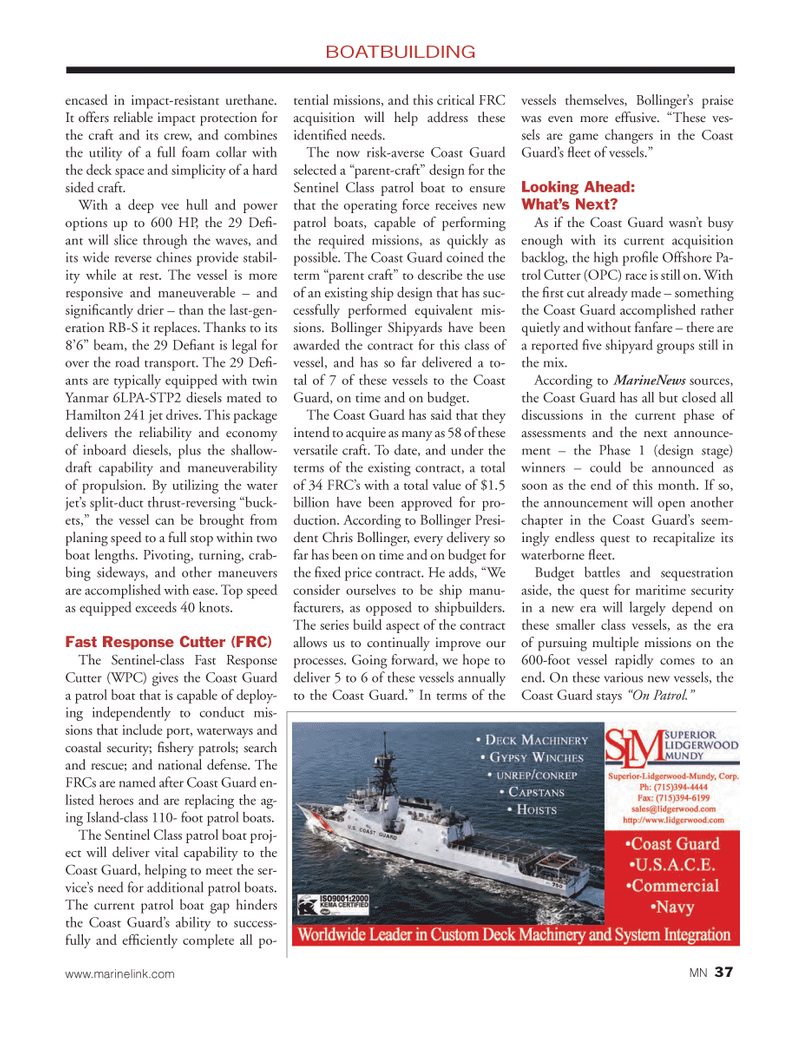 BOATBUILDING encased in impact-resistant urethane. It offers reliable impact protection for the craft and its crew, and combines the utility of a full foam collar with the deck space and simplicity of a hard sided craft.With a deep vee hull and power options up to 600 HP, the 29 DeÞ -ant will slice through the waves, and its wide reverse chines provide stabil- ity while at rest. The vessel is more responsive and maneuverable Ð and signiÞ cantly drier Ð than the last-gen-eration RB-S it replaces. Thanks to its 8Õ6Ó beam, the 29 DeÞ ant is legal for over the road transport. The 29 DeÞ -ants are typically equipped with twin Yanmar 6LPA-STP2 diesels mated to Hamilton 241 jet drives. This package delivers the reliability and economy of inboard diesels, plus the shallow- draft capability and maneuverability of propulsion. By utilizing the water jetÕs split-duct thrust-reversing Òbuck- ets,Ó the vessel can be brought from planing speed to a full stop within two boat lengths. Pivoting, turning, crab- bing sideways, and other maneuvers are accomplished with ease. Top speed as equipped exceeds 40 knots. Fast Response Cutter (FRC)The Sentinel-class Fast Response Cutter (WPC) gives the Coast Guard a patrol boat that is capable of deploy- ing independently to conduct mis-sions that include port, waterways and coastal security; Þ shery patrols; search and rescue; and national defense. The FRCs are named after Coast Guard en- listed heroes and are replacing the ag- ing Island-class 110- foot patrol boats. The Sentinel Class patrol boat proj- ect will deliver vital capability to the Coast Guard, helping to meet the ser- viceÕs need for additional patrol boats. The current patrol boat gap hinders the Coast GuardÕs ability to success- fully and efÞ ciently complete all po- tential missions, and this critical FRC acquisition will help address these identiÞ ed needs. The now risk-averse Coast Guard selected a Òparent-craftÓ design for the Sentinel Class patrol boat to ensure that the operating force receives new patrol boats, capable of performing the required missions, as quickly as possible. The Coast Guard coined the term Òparent craftÓ to describe the use of an existing ship design that has suc-cessfully performed equivalent mis- sions. Bollinger Shipyards have been awarded the contract for this class of vessel, and has so far delivered a to- tal of 7 of these vessels to the Coast Guard, on time and on budget. The Coast Guard has said that they intend to acquire as many as 58 of these versatile craft. To date, and under the terms of the existing contract, a total of 34 FRCÕs with a total value of $1.5 billion have been approved for pro- duction. According to Bollinger Presi- dent Chris Bollinger, every delivery so far has been on time and on budget for the Þ xed price contract. He adds, ÒWe consider ourselves to be ship manu- facturers, as opposed to shipbuilders. The series build aspect of the contract allows us to continually improve our processes. Going forward, we hope to deliver 5 to 6 of these vessels annually to the Coast Guard.Ó In terms of the vessels themselves, BollingerÕs praise was even more effusive. ÒThese ves- sels are game changers in the Coast GuardÕs ß eet of vessels.Ó Looking Ahead: What?s Next?As if the Coast Guard wasnÕt busy enough with its current acquisition backlog, the high proÞ le Offshore Pa- trol Cutter (OPC) race is still on. With the Þ rst cut already made Ð something the Coast Guard accomplished rather quietly and without fanfare Ð there are a reported Þ ve shipyard groups still in the mix. According to MarineNews sources, the Coast Guard has all but closed all discussions in the current phase of assessments and the next announce-ment Ð the Phase 1 (design stage) winners Ð could be announced as soon as the end of this month. If so, the announcement will open another chapter in the Coast GuardÕs seem- ingly endless quest to recapitalize its waterborne ß eet.Budget battles and sequestration aside, the quest for maritime security in a new era will largely depend on these smaller class vessels, as the era of pursuing multiple missions on the 600-foot vessel rapidly comes to an end. On these various new vessels, the Coast Guard stays ?On Patrol.? www.marinelink.com MN 37MN FEB14 Layout 32-49.indd 37MN FEB14 Layout 32-49.indd 371/20/2014 10:19:39 AM1/20/2014 10:19:39 AM