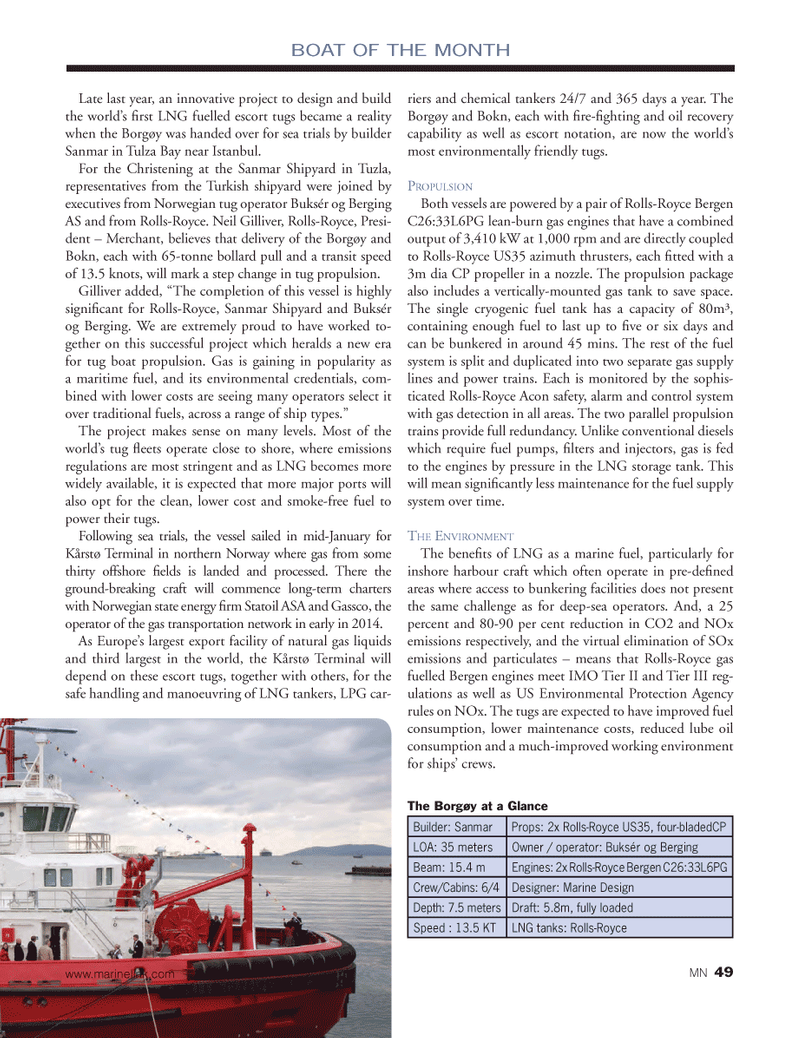 BOAT OF THE MONTH Late last year, an innovative project to design and build the world?s  rst LNG fuelled escort tugs became a reality when the Borgøy was handed over for sea trials by builder Sanmar in Tulza Bay near Istanbul. For the Christening at the Sanmar Shipyard in Tuzla, representatives from the Turkish shipyard were joined by executives from Norwegian tug operator Buksér og Berging AS and from Rolls-Royce. Neil Gilliver, Rolls-Royce, Presi- dent ? Merchant, believes that delivery of the Borgøy and Bokn, each with 65-tonne bollard pull and a transit speed of 13.5 knots, will mark a step change in tug propulsion. Gilliver added, ?The completion of this vessel is highly signi cant for Rolls-Royce, Sanmar Shipyard and Buksér og Berging. We are extremely proud to have worked to- gether on this successful project which heralds a new era for tug boat propulsion. Gas is gaining in popularity as a maritime fuel, and its environmental credentials, com- bined with lower costs are seeing many operators select it over traditional fuels, across a range of ship types.? The project makes sense on many levels. Most of the world?s tug  eets operate close to shore, where emissions regulations are most stringent and as LNG becomes more widely available, it is expected that more major ports will also opt for the clean, lower cost and smoke-free fuel to power their tugs. Following sea trials, the vessel sailed in mid-January for Kårstø Terminal in northern Norway where gas from some thirty offshore  elds is landed and processed. There the ground-breaking craft will commence long-term charters with Norwegian state energy  rm Statoil ASA and Gassco, the operator of the gas transportation network in early in 2014. As Europe?s largest export facility of natural gas liquids and third largest in the world, the Kårstø Terminal will depend on these escort tugs, together with others, for the safe handling and manoeuvring of LNG tankers, LPG car-riers and chemical tankers 24/7 and 365 days a year. The Borgøy and Bokn, each with  re- ghting and oil recovery capability as well as escort notation, are now the world?s most environmentally friendly tugs. PROPULSION Both vessels are powered by a pair of Rolls- Royce Bergen C26:33L6PG lean-burn gas engines that have a combined output of 3,410 kW at 1,000 rpm and are directly coupled to Rolls-Royce US35 azimuth thrusters, each  tted with a 3m dia CP propeller in a nozzle. The propulsion package also includes a vertically-mounted gas tank to save space. The single cryogenic fuel tank has a capacity of 80m³, containing enough fuel to last up to  ve or six days and can be bunkered in around 45 mins. The rest of the fuel system is split and duplicated into two separate gas supply lines and power trains. Each is monitored by the sophis- ticated Rolls-Royce Acon safety, alarm and control system with gas detection in all areas. The two parallel propulsion trains provide full redundancy. Unlike conventional diesels which require fuel pumps,  lters and injectors, gas is fed to the engines by pressure in the LNG storage tank. This will mean signi cantly less maintenance for the fuel supply system over time. THE ENVIRONMENT The bene ts of LNG as a marine fuel, particularly for inshore harbour craft which often operate in pre-de ned areas where access to bunkering facilities does not present the same challenge as for deep-sea operators. And, a 25 percent and 80-90 per cent reduction in CO2 and NOx emissions respectively, and the virtual elimination of SOx emissions and particulates ? means that Rolls- Royce gas fuelled Bergen engines meet IMO Tier II and Tier III reg- ulations as well as US Environmental Protection Agency rules on NOx. The tugs are expected to have improved fuel consumption, lower maintenance costs, reduced lube oil consumption and a much-improved working environment for ships? crews. Builder: SanmarProps: 2x Rolls-Royce US35, four-bladedCPLOA: 35 metersOwner / operator: Buksér og Berging Beam: 15.4 mEngines: 2x Rolls-Royce Bergen C26:33L6PG Crew/Cabins: 6/4 Designer: Marine DesignDepth: 7.5 metersDraft: 5.8m, fully loadedSpeed : 13.5 KTLNG tanks: Rolls-Royce The Borgøy at a Glance MN 49www.marinelink.com MN FEB14 Layout 32-49.indd 49MN FEB14 Layout 32-49.indd 491/20/2014 10:21:47 AM1/20/2014 10:21:47 AM