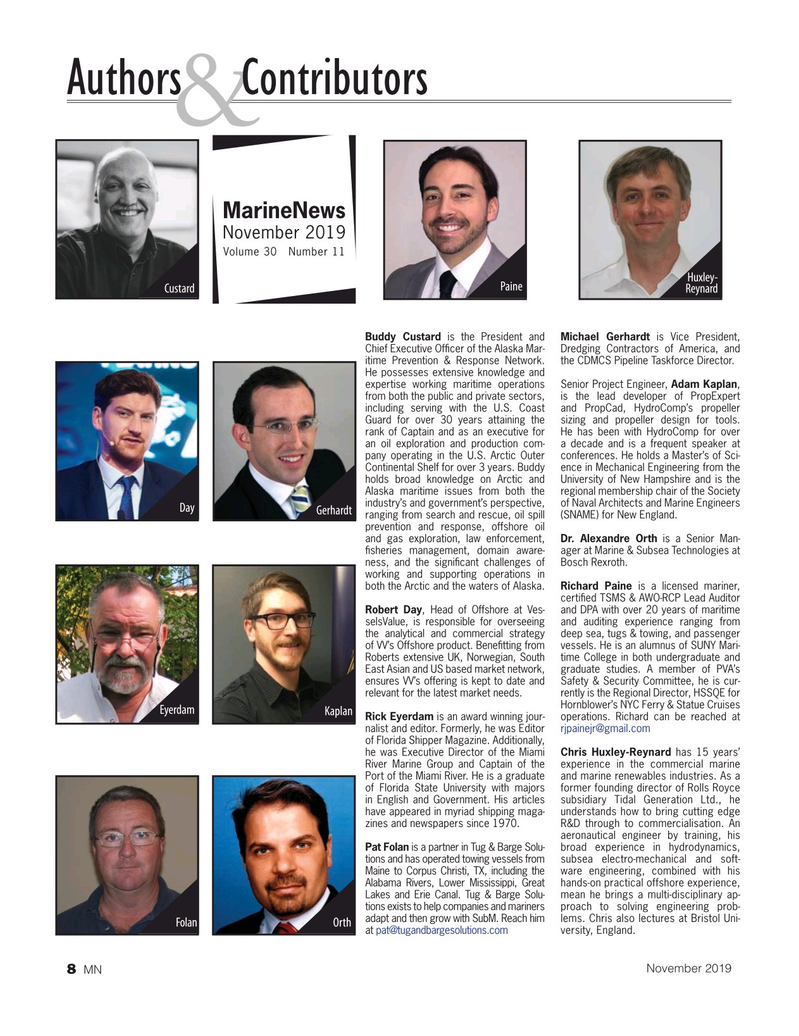 Buddy Custard is the President and Michael Gerhardt is Vice President,

He possesses extensive knowledge and expertise working maritime operations Senior Project Engineer, Adam Kaplan, from both the public and private sectors, is the lead developer of PropExpert including serving with the U.S. Coast and PropCad, HydroComp’s propeller

Guard for over 30 years attaining the sizing and propeller design for tools. rank of Captain and as an executive for He has been with HydroComp for over an oil exploration and production com- a decade and is a frequent speaker at pany operating in the U.S. Arctic Outer conferences. He holds a Master’s of Sci-

Continental Shelf for over 3 years. Buddy ence in Mechanical Engineering from the holds broad knowledge on Arctic and University of New Hampshire and is the

Alaska maritime issues from both the regional membership chair of the Society industry’s and government’s perspective, of Naval Architects and Marine Engineers

working and supporting operations in both the Arctic and the waters of Alaska. Richard Paine is a licensed mariner, certi? ed TSMS & AWO-RCP Lead Auditor

Robert Day, Head of Offshore at Ves- and DPA with over 20 years of maritime selsValue, is responsible for overseeing and auditing experience ranging from the analytical and commercial strategy deep sea, tugs & towing, and passenger of VV’s Offshore product. Bene? tting from vessels. He is an alumnus of SUNY Mari-

East Asian and US based market network, graduate studies. A member of PVA’s ensures VV’s offering is kept to date and Safety & Security Committee, he is cur- relevant for the latest market needs. rently is the Regional Director, HSSQE for

Rick Eyerdam is an award winning jour- operations. Richard can be reached at nalist and editor. Formerly, he was Editor rjpainejr@gmail.com of Florida Shipper Magazine. Additionally, he was Executive Director of the Miami Chris Huxley-Reynard has 15 years’

Port of the Miami River. He is a graduate and marine renewables industries. As a of Florida State University with majors former founding director of Rolls Royce in English and Government. His articles subsidiary Tidal Generation Ltd., he have appeared in myriad shipping maga- understands how to bring cutting edge zines and newspapers since 1970. R&D through to commercialisation. An aeronautical engineer by training, his

Pat Folan is a partner in Tug & Barge Solu- broad experience in hydrodynamics, tions and has operated towing vessels from subsea electro-mechanical and soft-

Maine to Corpus Christi, TX, including the ware engineering, combined with his