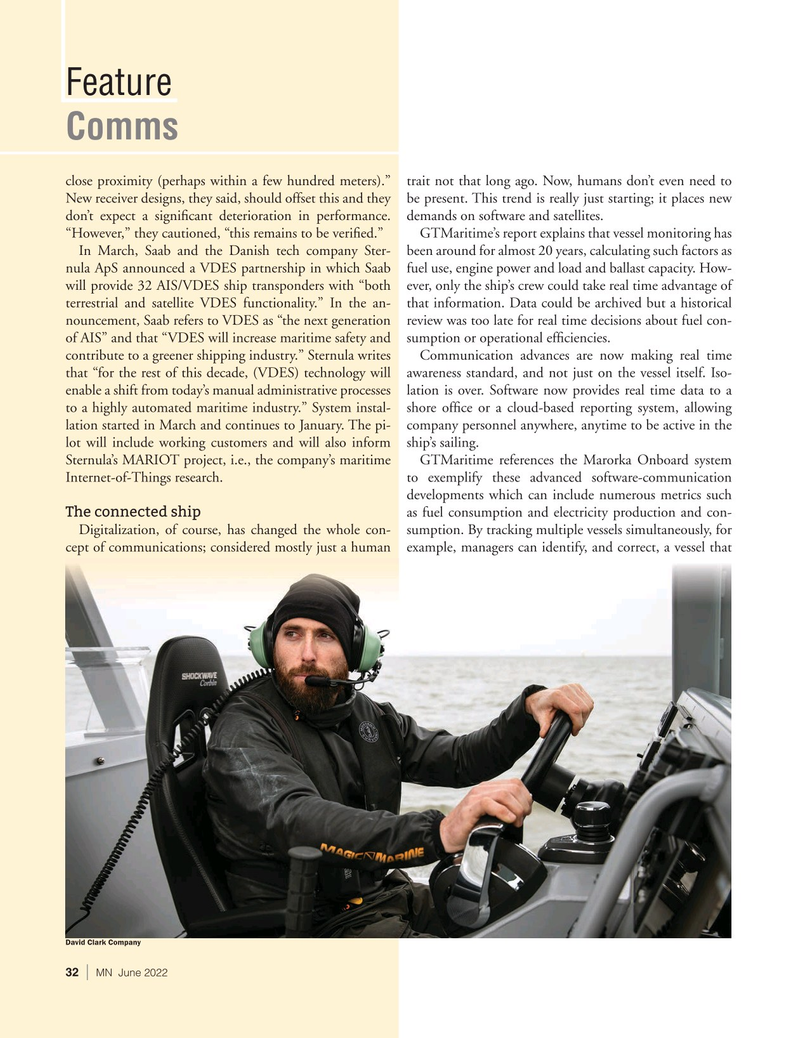 Comms close proximity (perhaps within a few hundred meters).” trait not that long ago. Now, humans don’t even need to

New receiver designs, they said, should offset this and they be present. This trend is really just starting; it places new don’t expect a signi? cant deterioration in performance. demands on software and satellites.

“However,” they cautioned, “this remains to be veri? ed.” GTMaritime’s report explains that vessel monitoring has

In March, Saab and the Danish tech company Ster- been around for almost 20 years, calculating such factors as nula ApS announced a VDES partnership in which Saab fuel use, engine power and load and ballast capacity. How- will provide 32 AIS/VDES ship transponders with “both ever, only the ship’s crew could take real time advantage of terrestrial and satellite VDES functionality.” In the an- that information. Data could be archived but a historical nouncement, Saab refers to VDES as “the next generation review was too late for real time decisions about fuel con- of AIS” and that “VDES will increase maritime safety and sumption or operational ef? ciencies.

contribute to a greener shipping industry.” Sternula writes Communication advances are now making real time that “for the rest of this decade, (VDES) technology will awareness standard, and not just on the vessel itself. Iso- enable a shift from today’s manual administrative processes lation is over. Software now provides real time data to a to a highly automated maritime industry.” System instal- shore of? ce or a cloud-based reporting system, allowing lation started in March and continues to January. The pi- company personnel anywhere, anytime to be active in the lot will include working customers and will also inform ship’s sailing.

Internet-of-Things research. to exemplify these advanced software-communication developments which can include numerous metrics such

The connected ship as fuel consumption and electricity production and con-

Digitalization, of course, has changed the whole con- sumption. By tracking multiple vessels simultaneously, for cept of communications; considered mostly just a human example, managers can identify, and correct, a vessel that