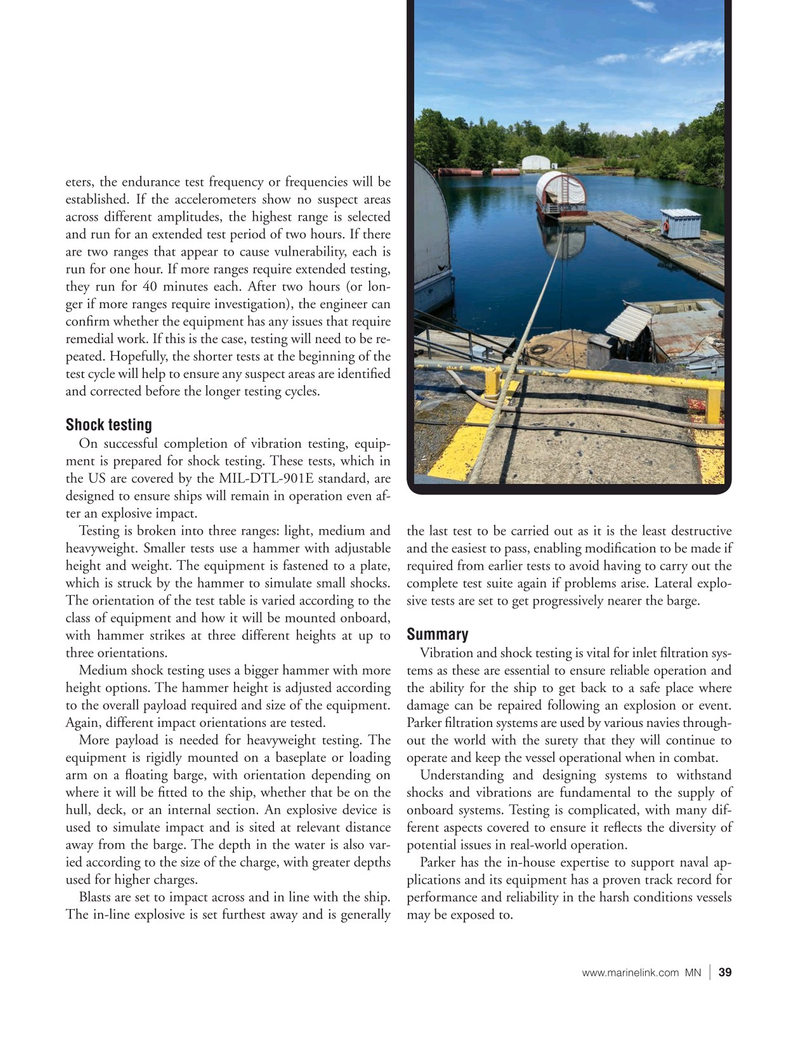 eters, the endurance test frequency or frequencies will be established. If the accelerometers show no suspect areas across different amplitudes, the highest range is selected and run for an extended test period of two hours. If there are two ranges that appear to cause vulnerability, each is run for one hour. If more ranges require extended testing, they run for 40 minutes each. After two hours (or lon- ger if more ranges require investigation), the engineer can con? rm whether the equipment has any issues that require remedial work. If this is the case, testing will need to be re- peated. Hopefully, the shorter tests at the beginning of the test cycle will help to ensure any suspect areas are identi? ed and corrected before the longer testing cycles.

On successful completion of vibration testing, equip- ment is prepared for shock testing. These tests, which in the US are covered by the MIL-DTL-901E standard, are designed to ensure ships will remain in operation even af- ter an explosive impact.

Testing is broken into three ranges: light, medium and the last test to be carried out as it is the least destructive heavyweight. Smaller tests use a hammer with adjustable and the easiest to pass, enabling modi? cation to be made if height and weight. The equipment is fastened to a plate, required from earlier tests to avoid having to carry out the which is struck by the hammer to simulate small shocks. complete test suite again if problems arise. Lateral explo-

The orientation of the test table is varied according to the sive tests are set to get progressively nearer the barge.

class of equipment and how it will be mounted onboard, with hammer strikes at three different heights at up to

Medium shock testing uses a bigger hammer with more tems as these are essential to ensure reliable operation and height options. The hammer height is adjusted according the ability for the ship to get back to a safe place where to the overall payload required and size of the equipment. damage can be repaired following an explosion or event.

More payload is needed for heavyweight testing. The out the world with the surety that they will continue to equipment is rigidly mounted on a baseplate or loading operate and keep the vessel operational when in combat. arm on a ? oating barge, with orientation depending on Understanding and designing systems to withstand where it will be ? tted to the ship, whether that be on the shocks and vibrations are fundamental to the supply of hull, deck, or an internal section. An explosive device is onboard systems. Testing is complicated, with many dif- used to simulate impact and is sited at relevant distance ferent aspects covered to ensure it re? ects the diversity of away from the barge. The depth in the water is also var- potential issues in real-world operation.

ied according to the size of the charge, with greater depths Parker has the in-house expertise to support naval ap- used for higher charges. plications and its equipment has a proven track record for

Blasts are set to impact across and in line with the ship. performance and reliability in the harsh conditions vessels

The in-line explosive is set furthest away and is generally may be exposed to.