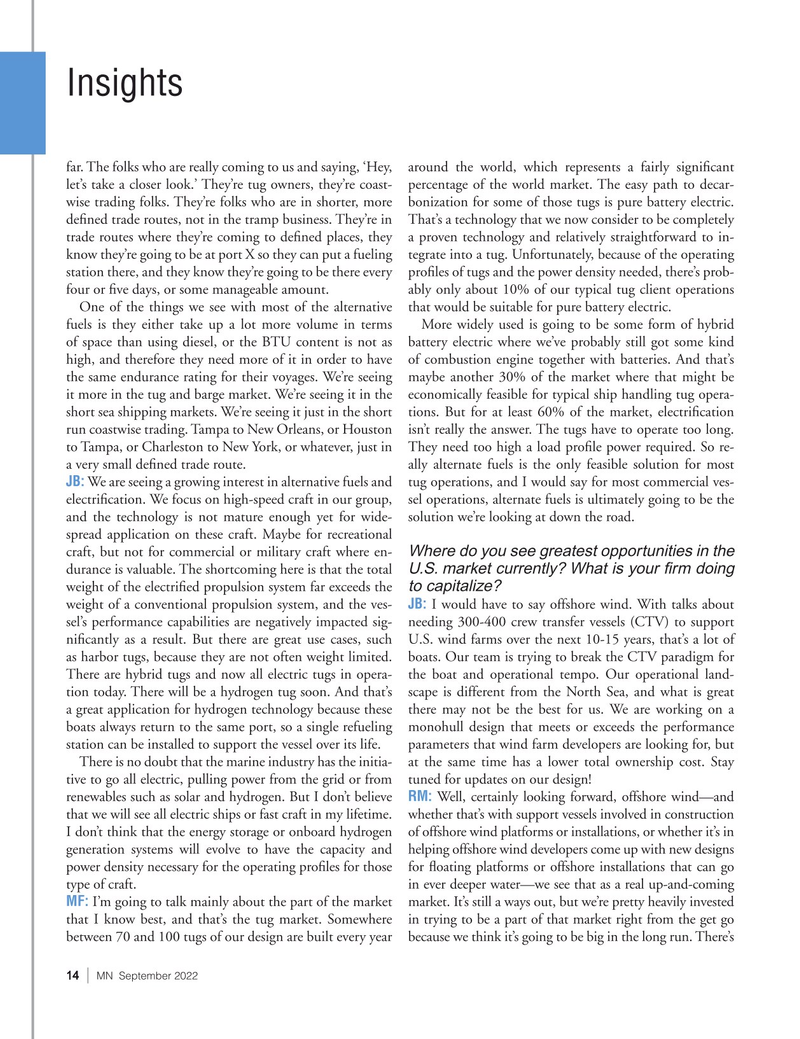 Insights far. The folks who are really coming to us and saying, ‘Hey, around the world, which represents a fairly signi? cant let’s take a closer look.’ They’re tug owners, they’re coast- percentage of the world market. The easy path to decar- wise trading folks. They’re folks who are in shorter, more bonization for some of those tugs is pure battery electric. de? ned trade routes, not in the tramp business. They’re in That’s a technology that we now consider to be completely trade routes where they’re coming to de? ned places, they a proven technology and relatively straightforward to in- know they’re going to be at port X so they can put a fueling tegrate into a tug. Unfortunately, because of the operating station there, and they know they’re going to be there every pro? les of tugs and the power density needed, there’s prob- four or ? ve days, or some manageable amount. ably only about 10% of our typical tug client operations

One of the things we see with most of the alternative that would be suitable for pure battery electric.

fuels is they either take up a lot more volume in terms More widely used is going to be some form of hybrid of space than using diesel, or the BTU content is not as battery electric where we’ve probably still got some kind high, and therefore they need more of it in order to have of combustion engine together with batteries. And that’s the same endurance rating for their voyages. We’re seeing maybe another 30% of the market where that might be it more in the tug and barge market. We’re seeing it in the economically feasible for typical ship handling tug opera- short sea shipping markets. We’re seeing it just in the short tions. But for at least 60% of the market, electri? cation run coastwise trading. Tampa to New Orleans, or Houston isn’t really the answer. The tugs have to operate too long. to Tampa, or Charleston to New York, or whatever, just in They need too high a load pro? le power required. So re- a very small de? ned trade route. ally alternate fuels is the only feasible solution for most

JB: We are seeing a growing interest in alternative fuels and tug operations, and I would say for most commercial ves- electri? cation. We focus on high-speed craft in our group, sel operations, alternate fuels is ultimately going to be the and the technology is not mature enough yet for wide- solution we’re looking at down the road.

spread application on these craft. Maybe for recreational craft, but not for commercial or military craft where en-

Where do you see greatest opportunities in the durance is valuable. The shortcoming here is that the total

U.S. market currently? What is your ? rm doing weight of the electri? ed propulsion system far exceeds the to capitalize?

weight of a conventional propulsion system, and the ves- JB: I would have to say offshore wind. With talks about sel’s performance capabilities are negatively impacted sig- needing 300-400 crew transfer vessels (CTV) to support ni? cantly as a result. But there are great use cases, such U.S. wind farms over the next 10-15 years, that’s a lot of as harbor tugs, because they are not often weight limited. boats. Our team is trying to break the CTV paradigm for

There are hybrid tugs and now all electric tugs in opera- the boat and operational tempo. Our operational land- tion today. There will be a hydrogen tug soon. And that’s scape is different from the North Sea, and what is great a great application for hydrogen technology because these there may not be the best for us. We are working on a boats always return to the same port, so a single refueling monohull design that meets or exceeds the performance station can be installed to support the vessel over its life. parameters that wind farm developers are looking for, but

There is no doubt that the marine industry has the initia- at the same time has a lower total ownership cost. Stay tive to go all electric, pulling power from the grid or from tuned for updates on our design! renewables such as solar and hydrogen. But I don’t believe RM: Well, certainly looking forward, offshore wind—and that we will see all electric ships or fast craft in my lifetime. whether that’s with support vessels involved in construction

I don’t think that the energy storage or onboard hydrogen of offshore wind platforms or installations, or whether it’s in generation systems will evolve to have the capacity and helping offshore wind developers come up with new designs power density necessary for the operating pro? les for those for ? oating platforms or offshore installations that can go type of craft. in ever deeper water—we see that as a real up-and-coming

MF: I’m going to talk mainly about the part of the market market. It’s still a ways out, but we’re pretty heavily invested that I know best, and that’s the tug market. Somewhere in trying to be a part of that market right from the get go between 70 and 100 tugs of our design are built every year because we think it’s going to be big in the long run. There’s 14 | MN September 2022