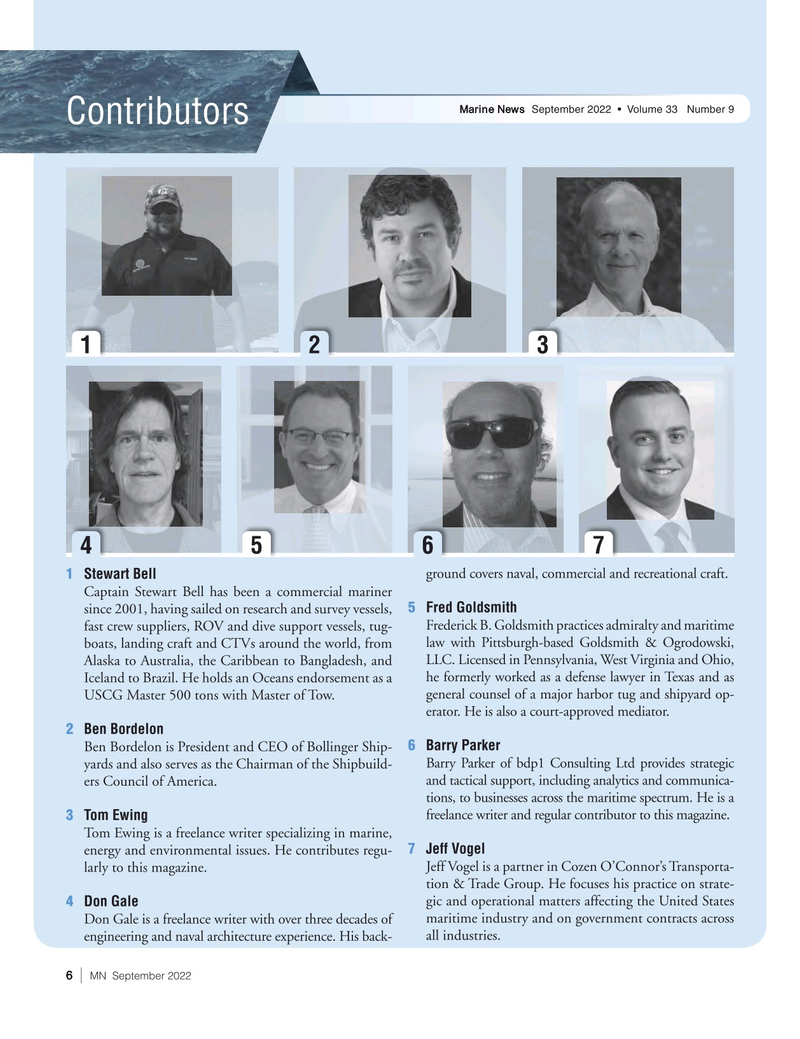 Captain Stewart Bell has been a commercial mariner since 2001, having sailed on research and survey vessels, 5 Fred Goldsmith fast crew suppliers, ROV and dive support vessels, tug- Frederick B. Goldsmith practices admiralty and maritime boats, landing craft and CTVs around the world, from law with Pittsburgh-based Goldsmith & Ogrodowski,

Alaska to Australia, the Caribbean to Bangladesh, and LLC. Licensed in Pennsylvania, West Virginia and Ohio,

Iceland to Brazil. He holds an Oceans endorsement as a he formerly worked as a defense lawyer in Texas and as

USCG Master 500 tons with Master of Tow. general counsel of a major harbor tug and shipyard op- erator. He is also a court-approved mediator.

Ben Bordelon is President and CEO of Bollinger Ship- 6 Barry Parker yards and also serves as the Chairman of the Shipbuild- Barry Parker of bdp1 Consulting Ltd provides strategic ers Council of America. and tactical support, including analytics and communica- tions, to businesses across the maritime spectrum. He is a 3 Tom Ewing freelance writer and regular contributor to this magazine.

Tom Ewing is a freelance writer specializing in marine, energy and environmental issues. He contributes regu- 7 Jeff Vogel larly to this magazine. Jeff Vogel is a partner in Cozen O’Connor’s Transporta- tion & Trade Group. He focuses his practice on strate- 4 Don Gale gic and operational matters affecting the United States

Don Gale is a freelance writer with over three decades of maritime industry and on government contracts across engineering and naval architecture experience. His back- all industries.