Acoustic-gravity waves are very long sound waves that cut through the deep ocean at the speed of sound. These lightning-quick currents can sweep up water, nutrients, salts, and any other particles in their wake, at any water depth. They are typically triggered by violent events in the ocean, including underwater earthquakes, explosions, landslides, and even meteorites, and they carry information about these events around the world in a matter of minutes. Researchers at MIT have now identified a less dramatic though far more pervasive source of acoustic-gravity waves: surface ocean waves, such as those that can be seen from a beach or the deck of a boat. These waves, known as surface-gravity waves, do not travel nearly as fast, far, or deep as acoustic-gravity waves, yet under the right conditions, they can generate the powerful, fast-moving, and low-frequency sound waves. The researchers have developed a general theory that connects gravity waves and acoustic waves. They found that when two surface-gravity waves, heading toward each other, are oscillating at a similar but not identical frequency, their interaction can release up to 95 percent of their initial energy in the form of an acoustic wave, which in turn carries this energy and travels much faster and deeper.
This interaction may occur anywhere in the ocean, in particular in regions where surface-gravity waves interact as they reflect from continental shelf breaks, where the deep-sea suddenly faces a much shallower shoreline. Usama Kadri, a visiting assistant professor and a research affiliate in MIT’s Department of Mathematics, says the team’s results establish a concrete and detailed relationship between surface-gravity waves and acoustic-gravity waves, which, until now, scientists had suspected did not exist. Understanding this relationship, he says, allows researchers to describe how energy is exchanged between gravity and acoustic waves. He says this energy could be vital for many marine life forms, and it could play a role in water transport and the redistribution of carbon dioxide and heat to deeper waters, thereby sustaining a healthy marine environment.
Kadri and his colleague, Triantaphyllos Akylas, a professor of mechanical engineering at MIT, have published their results in the Journal of Fluid Mechanics.
Adjusting for the real world
For the most part, gravity waves and acoustic waves have been regarded as completely separate entities, one having no effect on the other. That’s because their properties are so different, in both length and timescales. While gravity is the main force acting to restore and stabilize surface-gravity waves (hence the name), its effect on sound waves is negligible. On the other hand, the fact that water is slightly compressible is what allows pressure waves, such as sound, to travel through, though this property has almost no effect on surface waves.
Kadri says the typical water wave equations used to characterize ocean wave interactions do not apply to acoustic-gravity waves, as they do not factor in compressibility and gravity effects.
“Without compressibility and gravity, we cannot describe low-frequency sound waves correctly,” Kadri said. “This is one of the reasons why researchers have mostly overlooked acoustic-gravity waves.”
Kadri derived a wave equation that includes compressibility and gravity as well as higher-order nonlinear terms.
“In linear theory, two surface-gravity waves traveling toward each other do not feel each other; they get closer, pass each other, and then move away without exchanging any form of energy, as if they have never met,” Kadri explains. “However, in reality the picture is more complicated, and nonlinear effects may come into play, resulting in energy exchange and even generation of new waves, sometimes. Here, at specific frequency ranges, gravity waves can actually produce an acoustic wave that has completely different properties — and that is amazing.”
Rolling in the Deep
The newly derived wave equation allowed Kadri to study the behavior of both acoustic and gravity waves. He analyzed the theoretical interactions within a wave triad consisting of two surface-gravity waves and one acoustic-gravity wave. In 2013, he proved numerically that this configuration of waves should resonate, or exchange energy, meaning that as two of the three waves oscillate, they should drive the third wave to oscillate in response. Now, using the modified wave equation, along with multiple scales analysis, he derived what are called “evolution equations” to describe how the amplitudes of all three waves change as they exchange energy.
Surprisingly, he calculated that if two surface waves flow toward each other at roughly the same frequency and amplitude, as they meet and roll through each other the majority of their energy — up to 95 percent — can be turned into a sound wave, or acoustic-gravity wave. This energy can fluctuate, depending on the initial amplitudes and frequencies of the surface-gravity waves. Even when the surface-gravity waves travel in the form of short bursts, they can still transfer over 20 percent of their energy to acoustic-gravity waves, an amount that cannot be neglected.
“This is incredible, just to think that these waves are so different,” Kadri says. “Having them sharing energy is really exciting; this explains how some of the energy that comes from the atmosphere, from the sun and the wind, to the upper part of the ocean, can actually be driven to roll in the deep ocean through acoustic-gravity waves.”
Kadri says the results may help scientists connect interactions between not only surface and deep ocean waters, but also with the atmospheric forces that affect surface waves.
Now Kadri is imparting this new understanding of wave interactions to a critical application: tsunami detection. He is working with the Woods Hole Oceanographic Institution to design a system to detect acoustic-gravity waves that precede a tsunami, traveling more than 10 times as fast as the more destructive wave.
“Severe sea states, such as tsunamis, rogue waves, storms, landslides, and even meteorite fall, can all generate acoustic-gravity waves,” Kadri says. “We hope we can use these waves to set an early alarm for severe sea states in general and tsunamis in particular, and potentially save lives.”
Additional background ARCHIVE: Waves in the deep
(As published in the April 2016 edition of Marine Technology Reporter) 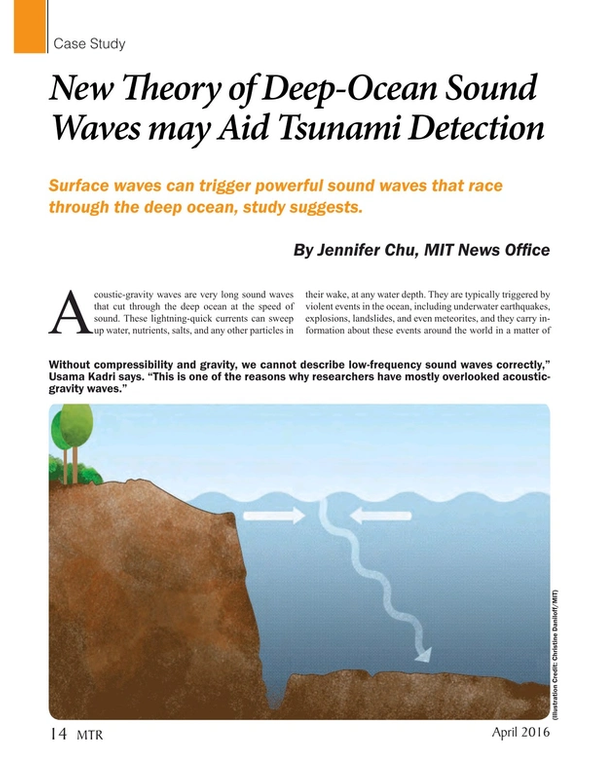 Other stories from April 2016 issue