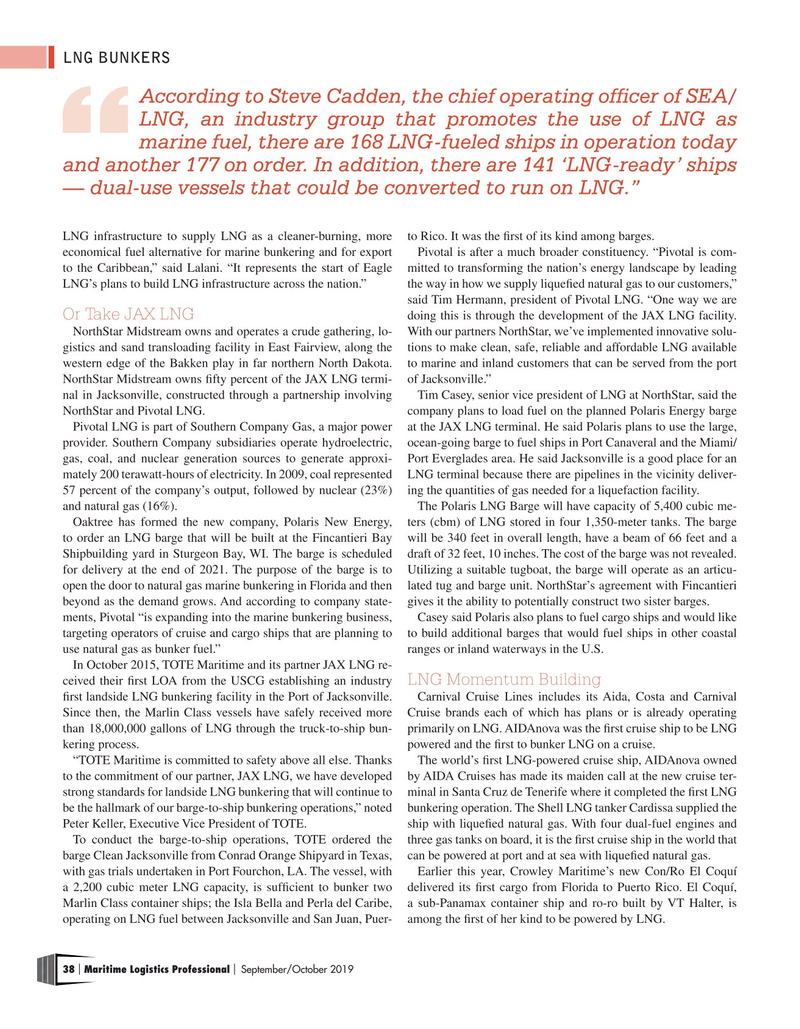 According to Steve Cadden, the chief operating officer of SEA/

LNG, an industry group that promotes the use of LNG as marine fuel, there are 168 LNG-fueled ships in operation today and another 177 on order. In addition, there are 141 ‘LNG-ready’ ships — dual-use vessels that could be converted to run on LNG.”

LNG infrastructure to supply LNG as a cleaner-burning, more to Rico. It was the frst of its kind among barges.

economical fuel alternative for marine bunkering and for export Pivotal is after a much broader constituency. “Pivotal is com- to the Caribbean,” said Lalani. “It represents the start of Eagle mitted to transforming the nation’s energy landscape by leading

LNG’s plans to build LNG infrastructure across the nation.” the way in how we supply liquefed natural gas to our customers,” said Tim Hermann, president of Pivotal LNG. “One way we are

Or Take JAX LNG doing this is through the development of the JAX LNG facility.

NorthStar Midstream owns and operates a crude gathering, lo- With our partners NorthStar, we’ve implemented innovative solu- gistics and sand transloading facility in East Fairview, along the tions to make clean, safe, reliable and affordable LNG available western edge of the Bakken play in far northern North Dakota. to marine and inland customers that can be served from the port

Pivotal LNG is part of Southern Company Gas, a major power at the JAX LNG terminal. He said Polaris plans to use the large, provider. Southern Company subsidiaries operate hydroelectric, ocean-going barge to fuel ships in Port Canaveral and the Miami/ gas, coal, and nuclear generation sources to generate approxi- Port Everglades area. He said Jacksonville is a good place for an mately 200 terawatt-hours of electricity. In 2009, coal represented LNG terminal because there are pipelines in the vicinity deliver- 57 percent of the company’s output, followed by nuclear (23%) ing the quantities of gas needed for a liquefaction facility.

Oaktree has formed the new company, Polaris New Energy, ters (cbm) of LNG stored in four 1,350-meter tanks. The barge to order an LNG barge that will be built at the Fincantieri Bay will be 340 feet in overall length, have a beam of 66 feet and a

Shipbuilding yard in Sturgeon Bay, WI. The barge is scheduled draft of 32 feet, 10 inches. The cost of the barge was not revealed. for delivery at the end of 2021. The purpose of the barge is to Utilizing a suitable tugboat, the barge will operate as an articu- open the door to natural gas marine bunkering in Florida and then lated tug and barge unit. NorthStar’s agreement with Fincantieri beyond as the demand grows. And according to company state- gives it the ability to potentially construct two sister barges. ments, Pivotal “is expanding into the marine bunkering business, Casey said Polaris also plans to fuel cargo ships and would like targeting operators of cruise and cargo ships that are planning to to build additional barges that would fuel ships in other coastal use natural gas as bunker fuel.” ranges or inland waterways in the U.S.

In October 2015, TOTE Maritime and its partner JAX LNG re- ceived their frst LOA from the USCG establishing an industry LNG Momentum Building frst landside LNG bunkering facility in the Port of Jacksonville. Carnival Cruise Lines includes its Aida, Costa and Carnival

Since then, the Marlin Class vessels have safely received more Cruise brands each of which has plans or is already operating than 18,000,000 gallons of LNG through the truck-to-ship bun- primarily on LNG. AIDAnova was the frst cruise ship to be LNG kering process. powered and the frst to bunker LNG on a cruise.

“TOTE Maritime is committed to safety above all else. Thanks The world’s frst LNG-powered cruise ship, AIDAnova owned to the commitment of our partner, JAX LNG, we have developed by AIDA Cruises has made its maiden call at the new cruise ter- strong standards for landside LNG bunkering that will continue to minal in Santa Cruz de Tenerife where it completed the frst LNG be the hallmark of our barge-to-ship bunkering operations,” noted bunkering operation. The Shell LNG tanker Cardissa supplied the

To conduct the barge-to-ship operations, TOTE ordered the three gas tanks on board, it is the frst cruise ship in the world that barge Clean Jacksonville from Conrad Orange Shipyard in Texas, can be powered at port and at sea with liquefed natural gas.

Marlin Class container ships; the Isla Bella and Perla del Caribe, a sub-Panamax container ship and ro-ro built by VT Halter, is operating on LNG fuel between Jacksonville and San Juan, Puer- among the frst of her kind to be powered by LNG.