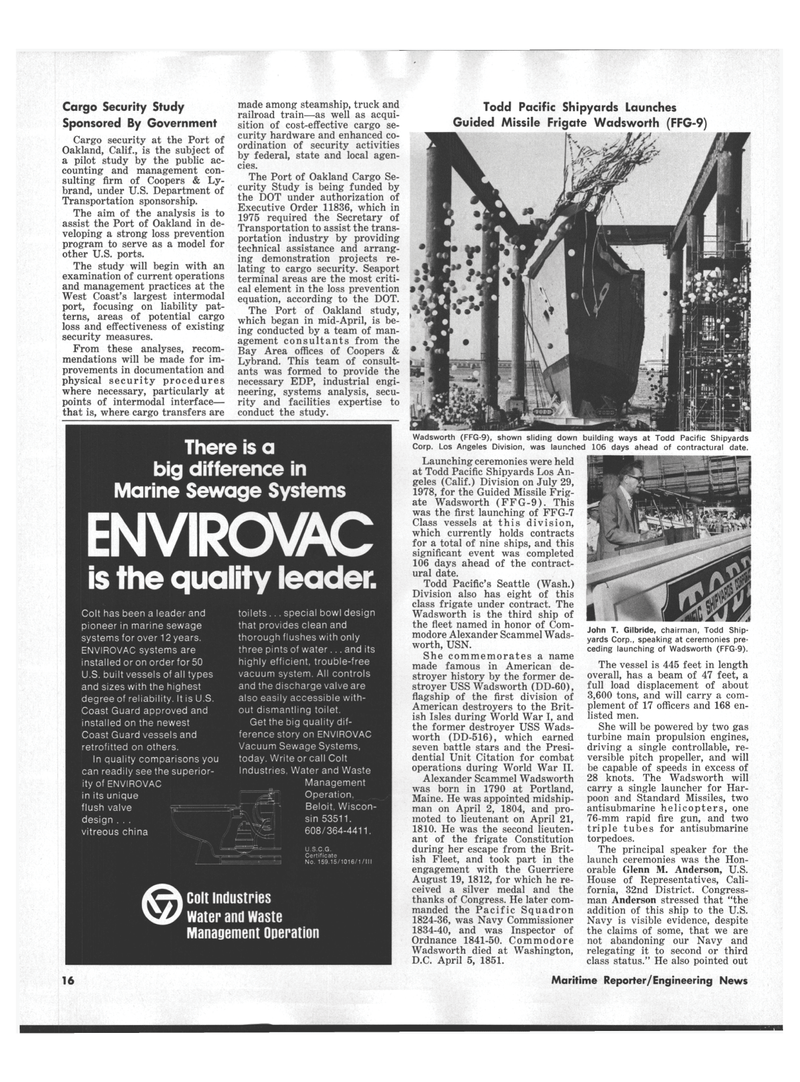 Cargo security at the Port of

Oakland, Calif., is the subject of a pilot study by the public ac- counting and management con- sulting firm of Coopers & Ly- brand, under U.S. Department of

The aim of the analysis is to assist the Port of Oakland in de- veloping a strong loss prevention program to serve as a model for other U.S. ports.

From these analyses, recom- mendations will be made for im- provements in documentation and physical security procedures where necessary, particularly at points of intermodal interface— that is, where cargo transfers are made among steamship, truck and railroad train—as well as acqui- sition of cost-effective cargo se- curity hardware and enhanced co- ordination of security activities by federal, state and local agen- cies.

Transportation to assist the trans- portation industry by providing technical assistance and arrang- ing demonstration projects re- lating to cargo security. Seaport terminal areas are the most criti- cal element in the loss prevention equation, according to the DOT.

The Port of Oakland study, which began in mid-April, is be- ing conducted by a team of man- agement consultants from the

Launching ceremonies were held at Todd Pacific Shipyards Los An- geles (Calif.) Division on July 29, 1978, for the Guided Missile Frig- ate Wadsworth (FFG-9). This was the first launching of FFG-7

Class vessels at this division, which currently holds contracts for a total of nine ships, and this significant event was completed 106 days ahead of the contract- ural date.

Division also has eight of this class frigate under contract. The

Wadsworth is the third ship of the fleet named in honor of Com- modore Alexander Scammel Wads- worth, USN.

She commemorates a name made famous in American de- stroyer history by the former de- stroyer USS Wadsworth (DD-60), flagship of the first division of

Alexander Scammel Wadsworth was born in 1790 at Portland,

Maine. He was appointed midship- man on April 2, 1804, and pro- moted to lieutenant on April 21, 1810. He was the second lieuten- ant of the frigate Constitution during her escape from the Brit- ish Fleet, and took part in the engagement with the Guerriere

She will be powered by two gas turbine main propulsion engines, driving a single controllable, re- versible pitch propeller, and will be capable of speeds in excess of 28 knots. The Wadsworth will carry a single launcher for Har- poon and Standard Missiles, two antisubmarine helicopters, one 76-mm rapid fire gun, and two triple tubes for antisubmarine torpedoes.

The principal speaker for the launch ceremonies was the Hon- orable Glenn M. Anderson, U.S.

House of Representatives, Cali- fornia, 32nd District. Congress- man Anderson stressed that "the addition of this ship to the U.S.

Navy is visible evidence, despite the claims of some, that we are not abandoning our Navy and relegating it to second or third class status." He also pointed out

There is a big difference in

Colt has been a leader and pioneer in marine sewage systems for over 12 years.

U.S. built vessels of all types and sizes with the highest degree of reliability. It is U.S.

Coast Guard approved and installed on the newest

Coast Guard vessels and retrofitted on others.

In quality comparisons you can readily see the superior- ity of ENVIROVAC in its unique flush valve design . . . vitreous china toilets ... special bowl design that provides clean and thorough flushes with only three pints of water... and its highly efficient, trouble-free vacuum system. All controls and the discharge valve are also easily accessible with- out dismantling toilet.

Get the big quality dif- ference story on ENVIROVAC