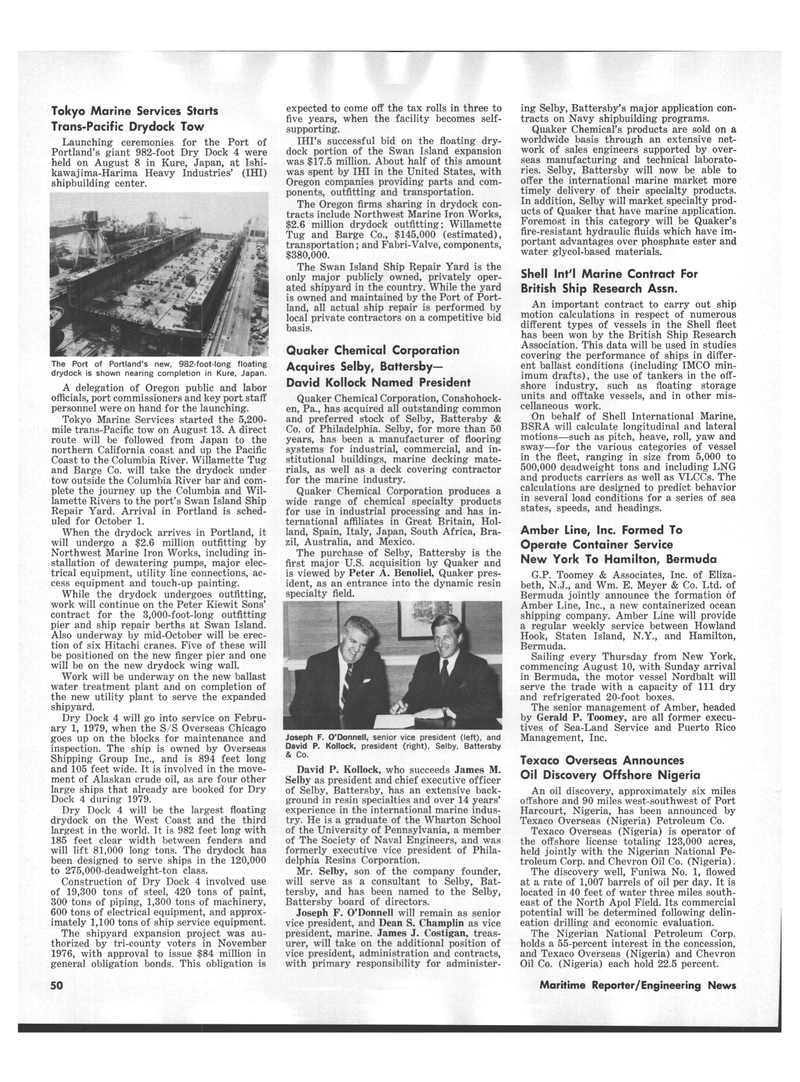 Launching ceremonies for the Port of

A delegation of Oregon public and labor officials, port commissioners and key port staff personnel were on hand for the launching.

Tokyo Marine Services started the 5,200- mile trans-Pacific tow on August 13. A direct route will be followed from Japan to the northern California coast and up the Pacific

Repair Yard. Arrival in Portland is sched- uled for October 1.

When the drydock arrives in Portland, it will undergo a $2.6 million outfitting by

While the drydock undergoes outfitting, work will continue on the Peter Kiewit Sons' contract for the 3,000-foot-long outfitting pier and ship repair berths at Swan Island.

Also underway by mid-October will be erec- tion of six Hitachi cranes. Five of these will be positioned on the new finger pier and one will be on the new drydock wing wall.

Work will be underway on the new ballast water treatment plant and on completion of the new utility plant to serve the expanded shipyard.

Dry Dock 4 will go into service on Febru- ary 1, 1979, when the S/S Overseas Chicago goes up on the blocks for maintenance and inspection. The ship is owned by Overseas

Shipping Group Inc., and is 894 feet long and 105 feet wide. It is involved in the move- ment of Alaskan crude oil, as are four other large ships that already are booked for Dry

Dry Dock 4 will be the largest floating drydock on the West Coast and the third largest in the world. It is 982 feet long with 185 feet clear width between fenders and will lift 81,000 long tons. The drydock has been designed to serve ships in the 120,000 to 275,000-deadweight-ton class.

The shipyard expansion project was au- thorized by tri-county voters in November 1976, with approval to issue $84 million in general obligation bonds. This obligation is expected to come off the tax rolls in three to five years, when the facility becomes self- supporting.

IHI's successful bid on the floating dry- dock portion of the Swan Island expansion was $17.5 million. About half of this amount was spent by IHI in the United States, with

The Swan Island Ship Repair Yard is the only major publicly owned, privately oper- ated shipyard in the country. While the yard is owned and maintained by the Port of Port- land, all actual ship repair is performed by local private contractors on a competitive bid basis.

Co. of Philadelphia. Selby, for more than 50 years, has been a manufacturer of flooring systems for industrial, commercial, and in- stitutional buildings, marine decking mate- rials, as well as a deck covering contractor for the marine industry.

The purchase of Selby, Battersby is the first major U.S. acquisition by Quaker and is viewed by Peter A. Benoliel, Quaker pres- ident, as an entrance into the dynamic resin specialty field.

Selby as president and chief executive officer of Selby, Battersby, has an extensive back- ground in resin specialties and over 14 years' experience in the international marine indus- try. He is a graduate of the Wharton School of the University of Pennsylvania, a member of The Society of Naval Engineers, and was formerly executive vice president of Phila- delphia Resins Corporation.

Mr. Selby, son of the company founder, will serve as a consultant to Selby, Bat- tersby, and has been named to the Selby,

Battersby board of directors.

Quaker Chemical's products are sold on a worldwide basis through an extensive net- work of sales engineers supported by over- seas manufacturing and technical laborato- ries. Selby, Battersby will now be able to offer the international marine market more timely delivery of their specialty products.

In addition, Selby will market specialty prod- ucts of Quaker that have marine application.

Foremost in this category will be Quaker's fire-resistant hydraulic fluids which have im- portant advantages over phosphate ester and water glycol-based materials.

Association. This data will be used in studies covering the performance of ships in differ- ent ballast conditions (including IMCO min- imum drafts), the use of tankers in the off- shore industry, such as floating storage units and offtake vessels, and in other mis- cellaneous work.

On behalf of Shell International Marine,

BSRA will calculate longitudinal and lateral motions—such as pitch, heave, roll, yaw and sway—for the various categories of vessel in the fleet, ranging in size from 5,000 to 500,000 deadweight tons and including LNG and products carriers as well as VLCCs. The calculations are designed to predict behavior in several load conditions for a series of sea states, speeds, and headings.

Bermuda jointly announce the formation of

Sailing every Thursday from New York, commencing August 10, with Sunday arrival in Bermuda, the motor vessel Nordbalt will serve the trade with a capacity of 111 dry and refrigerated 20-foot boxes.

The senior management of Amber, headed by Gerald P. Toomey, are all former execu- tives of Sea-Land Service and Puerto Rico

Harcourt, Nigeria, has been announced by

The discovery well, Funiwa No. 1, flowed at a rate of 1,007 barrels of oil per day. It is located in 40 feet of water three miles south- east of the North Apol Field. Its commercial potential will be determined following delin- eation drilling and economic evaluation.

The Nigerian National Petroleum Corp. holds a 55-percent interest in the concession, and Texaco Overseas (Nigeria) and Chevron