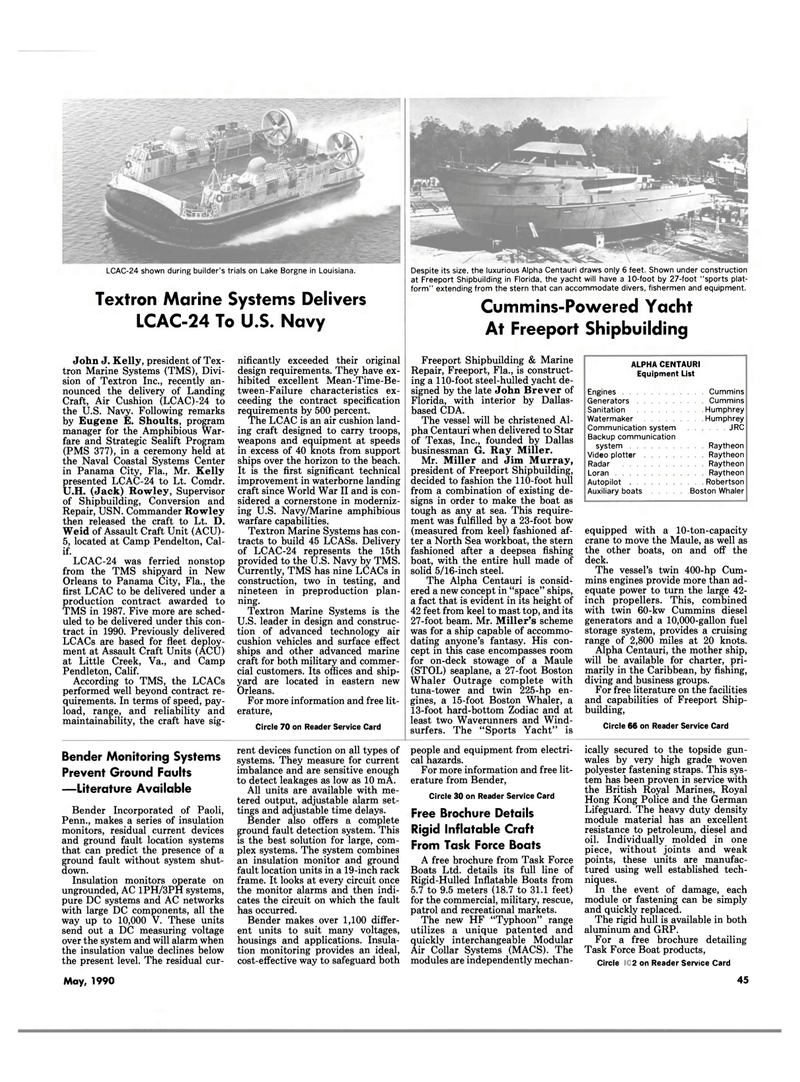 LCAC-24 was ferried nonstop from the TMS shipyard in New

Orleans to Panama City, Fla., the first LCAC to be delivered under a production contract awarded to

TMS in 1987. Five more are sched- uled to be delivered under this con- tract in 1990. Previously delivered

LCACs are based for fleet deploy- ment at Assault Craft Units (ACU) at Little Creek, Va., and Camp

According to TMS, the LCACs performed well beyond contract re- quirements. In terms of speed, pay- load, range, and reliability and maintainability, the craft have sig- nificantly exceeded their original design requirements. They have ex- hibited excellent Mean-Time-Be- tween-Failure characteristics ex- ceeding the contract specification requirements by 500 percent.

The LCAC is an air cushion land- ing craft designed to carry troops, weapons and equipment at speeds in excess of 40 knots from support ships over the horizon to the beach.

It is the first significant technical improvement in waterborne landing craft since World War II and is con- sidered a cornerstone in moderniz- ing U.S. Navy/Marine amphibious warfare capabilities.

Textron Marine Systems has con- tracts to build 45 LCASs. Delivery of LCAC-24 represents the 15th provided to the U.S. Navy by TMS.

Currently, TMS has nine LCACs in construction, two in testing, and nineteen in preproduction plan- ning.

Textron Marine Systems is the

U.S. leader in design and construc- tion of advanced technology air cushion vehicles and surface effect ships and other advanced marine craft for both military and commer- cial customers. Its offices and ship- yard are located in eastern new

Florida, with interior by Dallas- based CD A.

The vessel will be christened Al- pha Centauri when delivered to Star of Texas, Inc., founded by Dallas businessman G. Ray Miller.

Mr. Miller and Jim Murray, president of Freeport Shipbuilding, decided to fashion the 110-foot hull from a combination of existing de- signs in order to make the boat as tough as any at sea. This require- ment was fulfilled by a 23-foot bow (measured from keel) fashioned af- ter a North Sea workboat, the stern fashioned after a deepsea fishing boat, with the entire hull made of solid 5/16-inch steel.

The Alpha Centauri is consid- ered a new concept in "space" ships, a fact that is evident in its height of 42 feet from keel to mast top, and its 27-foot beam. Mr. Miller's scheme was for a ship capable of accommo- dating anyone's fantasy. His con- cept in this case encompasses room for on-deck stowage of a Maule (STOL) seaplane, a 27-foot Boston

Whaler Outrage complete with tuna-tower and twin 225-hp en- gines, a 15-foot Boston Whaler, a 13-foot hard-bottom Zodiac and at least two Waverunners and Wind- surfers. The "Sports Yacht" is

Auxiliary boats Boston Whaler equipped with a 10-ton-capacity crane to move the Maule, as well as the other boats, on and off the deck.

Alpha Centauri, the mother ship, will be available for charter, pri- marily in the Caribbean, by fishing, diving and business groups.

For free literature on the facilities and capabilities of Freeport Ship- building,

LCAC-24 shown during builder's trials on Lake Borgne in Louisiana.

Despite its size, the luxurious Alpha Centauri draws only 6 feet. Shown under construction at Freeport Shipbuilding in Florida, the yacht will have a 10-foot by 27-foot "sports plat- form" extending from the stern that can accommodate divers, fishermen and equipment.

Penn., makes a series of insulation monitors, residual current devices and ground fault location systems that can predict the presence of a ground fault without system shut- down.

Insulation monitors operate on ungrounded, AC 1PH/3PH systems, pure DC systems and AC networks with large DC components, all the way up to 10,000 V. These units send out a DC measuring voltage over the system and will alarm when the insulation value declines below the present level. The residual cur- rent devices function on all types of systems. They measure for current imbalance and are sensitive enough to detect leakages as low as 10 mA.

All units are available with me- tered output, adjustable alarm set- tings and adjustable time delays.

Bender also offers a complete ground fault detection system. This is the best solution for large, com- plex systems. The system combines an insulation monitor and ground fault location units in a 19-inch rack frame. It looks at every circuit once the monitor alarms and then indi- cates the circuit on which the fault has occurred.

For more information and free lit- erature from Bender,

A free brochure from Task Force

Rigid-Hulled Inflatable Boats from 5.7 to 9.5 meters (18.7 to 31.1 feet) for the commercial, military, rescue, patrol and recreational markets.

Hong Kong Police and the German

Lifeguard. The heavy duty density module material has an excellent resistance to petroleum, diesel and oil. Individually molded in one piece, without joints and weak points, these units are manufac- tured using well established tech- niques.

In the event of damage, each module or fastening can be simply and quickly replaced.

The rigid hull is available in both aluminum and GRP.

For a free brochure detailing