In September 1993, as the Secretaries of Defense and Transportation announced a new commercial shipbuilding initiative, the President declared that "[shipbuilding is one of the keys to America's national defense, and helping our shipbuilders succeed commercially is an important goal of defense conversion." A cornerstone of the 1993 Shipbuilding Initiative was the revival of the Federal Ship Financing Program (commonly known as the "Title XI Program" because its statutory authority is spelled out under Title XI of the Merchant Marine Act, 1936). Administered by the Maritime Administration ("MarAd") of the U.S. Department of Transportation, the program has prospered since 1993 under a rigorous review process mandated by the Federal Credit Reform Act of 1990 ("FCRA").

Now, despite this success, the Title XI Program struggles with a historic low level of funds due to a precipitous drop in annual appropriations in the last two years and an even lower recommendation from the Administration for the coming year. There are certain misconceptions or myths that have formed in official circles about the funding for this program. For Title XI appropriations to be restored to prior levels, these myths about how the program functions must be dispelled.

Background Prior to the implementation of the FCRA in the early 1990s, appropriations were not required for the issuance of a federal loan guarantee. However, thanks to the passage of the FCRA, the risk of default for every loan to be guaranteed by the U.S. Government must now be subsidized by appropriated dollars.

Therefore, funds have been appropriated annually for Title XI loan guarantee "subsidies" from fiscal year 1993 to the present. In recognition of the long-term nature of shipbuilding projects, appropriations Acts do not require Title XI appropriations to be spent in a particular fiscal year but are carried forward from year to year until spent (such appropriations are called "no-year money").

Before a Title XI loan guarantee may be issued, MarAd and the Office of Management and Budget evaluate the loan's default risk in light of a number of statutorily prescribed risk factors, and determine the amount of subsidy required. The most common subsidy cost of Title XI guarantees is five percent of the amount of the guarantee.

From 1993 to 1997, the annual appro- priations to subsidize the default risk of Title XI guarantees ranged between $50 million and $32 million. In the last two years, however, the annual level has dropped drastically to $6 million, a decrease of more than 80 percent. To make up just for the amount lost will require an appropriation of $84 million for FY 2001. Yet, regrettably, the President's budget request for that year is only $2 million. This disturbing trend can be traced, at least in part, to various myths about the Title XI Program.

Myths & Realities Myth: MarAd has not been spending the current funds.

Reality: Already $41.5 million in subsidy funds have been obligated in FY 2000.

Although some argue that demand for guarantees is so low that MarAd cannot spend the money appropriated, the reality is that with three months remaining in the fiscal year, available subsidy funds for Title XI have dropped to a historical low of about $28.1 million. This is sufficient to cover only about $562 million in guarantees. In contrast, at present, applications for guarantees totaling more than $4 billion await MarAd approval. Although not all of these applications will be approved, the existing funds plus the amount requested by the President will be adequate to guarantee only 15 percent of these cur- rently pending projects. Applications for other major projects are expected to be submitted to MarAd in the next several months.

The reality is that in FY 1994-1999 the Title XI Program obligated on average $45 million per year in loan guarantee subsidy funds. These were the six full fiscal years after the program's revival in FY 1993. Even when the startup year of FY 1993 is included, the average obligation level is just under $40 million per year.

Myth: Additional funds are not needed until current funds are spent.

Reality: At least $50 million in Title XI appropriations is needed each and every year to attract the very large shipbuilding projects, especially those that support the national defense industrial base.

Title XI guarantees provide financing every year for a steady stream of small and medium-size projects and periodically for very large shipbuilding projects.

Major shipbuilding projects, which provide supplemental commercial work to national defense shipyards, are a central objective of both the Shipbuilding Initiative and the Title XI Program, and require from two to four years to put together.

Investors in these larger projects will not proceed unless they can depend on the necessary funds being available once they raise the millions of dollars in equity required before MarAd will consider a loan guarantee application. During FY 1994-1999 the available level of funding averaged $110.2 million annually, ranging from a low of $94.3 million to a high of $126.8 million. With this level of funds available, an investor interested in a very large project can be confident that Title XI funds will be in the account when needed for the project, even if $35-40 million every year goes to smaller projects.

Myth: Title XI is a costly program for the Government to run.

When interest is included, this number rises to almost $150 million. Of projects approved since FY 1993 under MarAd's rigorous review, only $1.9 million (a single project) was lost due to default. This is less than two percent of the amount gained in fees. Even when including the worst-case outcome of the recent default of the Massachusetts Heavy Industries loan for the shipyard at Quincy (which was approved under special legislation), the fees are still almost double the total defaults. The loss from the Quincy default will be mitigated by any amounts recovered from the sale of assets at the shipyard.

In addition, since FY 1995 a total of $ 1.076 billion in MarAd Title XI funds has been returned to the Treasury under the liquidation and periodic re-estimation procedures of the FCRA. Under the FCRA, all balances in the financing account from accumulated fees and interest have to be transferred to the General Fund of the U.S. Treasury. In addition, vessel loan guarantees periodically are "re-estimated" to determine whether they are more or less risky. If less risky (presumably a vessel loan becomes increasingly less risky as it is being paid off over time), a proportional amount of the subsidy appropriation originally set aside to cover a potential default is also returned to the U.S.

Treasury for general use.

Prospects for Increased Funding Can Title XI funding be restored to the levels of the mid-1990s? While uncertain, there are signs that a sizable number of Members of Congress are recognizing the value of making up for the funding lost in recent years. Important steps have been taken to lay the groundwork for the actual appropriations. Earlier this year, 24 Senators and more than 50 Congressmen sent letters in support of $50 million for the Title XI Program to the Senate and House Appropriations Committees, respectively. Since then, the House of Representatives voted for legislation recommending authorization for a $50 million program, and the Senate committee responsible for maritime issues also voted in favor of $50 million for Title XI. However, the actual appropriations for Title XI are provided separately every year in the Commerce-Justice-State ("CJS") appropriations bill, and an appropriation for the full $50 million could be difficult under current budget constraints. The House, for example, passed an FY 2001 CJS appropriations bill in late June that provides only $10,621 million for Title XI subsidy costs.

Although the Senate has not yet (as of this writing) acted on its version of the CJS appropriations bill, the Senate customarily has taken a more favorable view of the Title XI program than the House.

However, the overall budget allocation for the Senate CJS appropriations bill is severely limited and funding for all programs within the bill, including for Title XI, may be held to levels that Senators would not normally desire. For this reason, in addition to regular appropriations, alternative sources of funding may have to be considered. They range from an allocation to the Title XI program from the ever-burgeoning budget surplus, to transfers from Department of Defense appropriations, as was the case in FY94 and FY95. Surely the amounts transferred to the U.S. Treasury over the years should count for something as the current budget is debated. The hope is that Congress will continue the shipbuilding initiative that began in the early 1990s and be creative in finding the resources to maintain a strong, vibrant, and fully funded Title XI program. 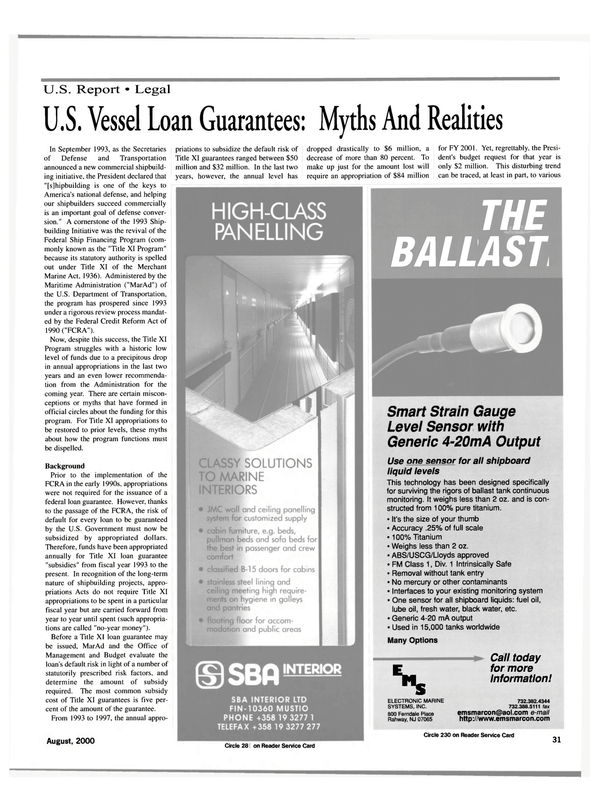