As the holiday season and the end of another year quickly approaches, the towing industry patiently waits for the Coast Guard to finalize the long-awaited towing vessel inspection rule.  More than 10 years ago, Congress passed the Coast Guard and Maritime Transportation Act of 2004, requiring more stringent regulation of uninspected towing vessels (UTVs).
Since that time, the Coast Guard and several industry groups (including the Towing Safety Advisory Committee (TSAC), American Waterways Operators (AWO) and the American Bureau of Shipping) have been working hard to finalize the rulemaking and attendant regulations. The stated intent of the rulemaking is to promote safer work practices and reduce casualties on towing vessels by requiring that vessels adhere to prescribed safety standards and safety management systems or to an alternative, annual Coast Guard inspection regime.
As the Coast Guard finalizes its adjudication of the 3,000 comments received in response to the notice of proposed rulemaking in 2011, let’s take this opportunity to consider the obvious and not so obvious legal consequences of such a significant rule.

Violations of proscribed safety standards will result in the assessment and collection of civil monetary penalties.  The Coast Guard employs Hearing Officers to adjudicate civil penalty cases in support of the Marine Safety mission.  In turn, 46 USC §2107 requires standard procedures for the handling of civil penalties for infractions of regulations but an “on the record” hearing within the meaning of the Administrative Procedures Act (APA) is not required.  It is yet to be determined whether Coast Guard enforcement activity for towing vessels will be phased in a manner similar to the ballast water standards. Readers will recall that the Coast Guard did not immediately enforce the ballast water management regulations in 2013.   Furthermore, it is important to note that the proposed rulemaking sets forth a phased-in scheme, providing a fairly generous timeframe for compliance.

In the aftermath of marine casualties, Coast Guard Investigating Officers are charged with ascertaining whether credentialed mariners committed acts of misconduct, incompetence, negligence or violations of law.  Notably, 46 CFR §5.27 provides that “Misconduct is human behavior which violates some formal, duly established rule. Such rules are found in, among other places, statutes, regulations, the common law, the general maritime law, a ship’s regulation or order, or shipping articles and similar sources.”  The impending towing vessel regulations will provide casualty investigators with some additional bases to craft suspension and revocation charges against credentialed mariners.


Not So Obvious
Consequences

Running a vessel or fleet of towing vessels is a risky business and limitation of liability is an important component of maritime law.  In short, limitation of liability in the United States permits vessel owners and their insurers to reduce the amount of the potential exposure to the value of the vessel and pending freight.  The owner is entitled to limitation if it can establish that the acts or omissions leading to the casualty were not within its “privity or knowledge.”  Determining whether an owner can limit its liability can hinge upon an analysis of whether any applicable safety regulation was violated.  Given this established legal framework, violation of a regulation in the impending Subchapter “M” could form the basis for denying an owner’s limitation application.  As the publication of Subchapter “M” will put vessel interests on notice of the standards necessary to safely operate towing vessels, owners and operators are encouraged to participate in the Coast Guard’s Towing Vessel Bridging Program (TVBP) to ensure they are better informed and prepared to meet the impending requirements in the coming years.

Non-compliance with a Coast Guard regulation “opens the door” for a charge of negligence per se, which is negligence established as a matter of law.  In these instances, the breach of the duty is not a jury question.  More importantly, a breach of a safety regulation, if proven, could prevent a court from considering the comparative fault of an injured crewmember in a Jones Act lawsuit.  Contemplate that an employee is arguably 75% responsible for his own injury but the vessel owner is nonetheless held 100% responsible with no offset because there was a violation of some Subchapter M regulation. Historically, attorneys representing injured seaman often looked to OSHA regulations to establish negligence per se.  Now Coast Guard regulations will provide an additional basis in support of injured crewmembers’ claims of legal negligence.

Under the Oil Pollution Act of 1990, Responsible Parties (RPs) can submit reimbursement claims to the National Pollutions Funds Center (NPFC) for removal costs and damages.  RPs may limit their liability if costs and damages incurred exceed the amount of total liability as determined by 33 U.S.C. §2702.  However, RPs cannot limit their liabilities if the incident was proximately caused by the violation of an applicable federal safety, construction, or operating regulation by an RP.  The NPFC has previously denied reimbursement claims on the basis that applicable safety and operating regulations were violated.

When finalized, the Subchapter “M” Rulemaking will promote safer work practices and should reduce casualties throughout the towing industry.  This is what Congress and the Coast Guard intended. As the final rule is published, vessel interests are encouraged to consider the lesser intended and not so obvious consequences of such a significant rulemaking.  In the coming year, owners and operators of towing vessels should proceed diligently with “eyes wide open.” 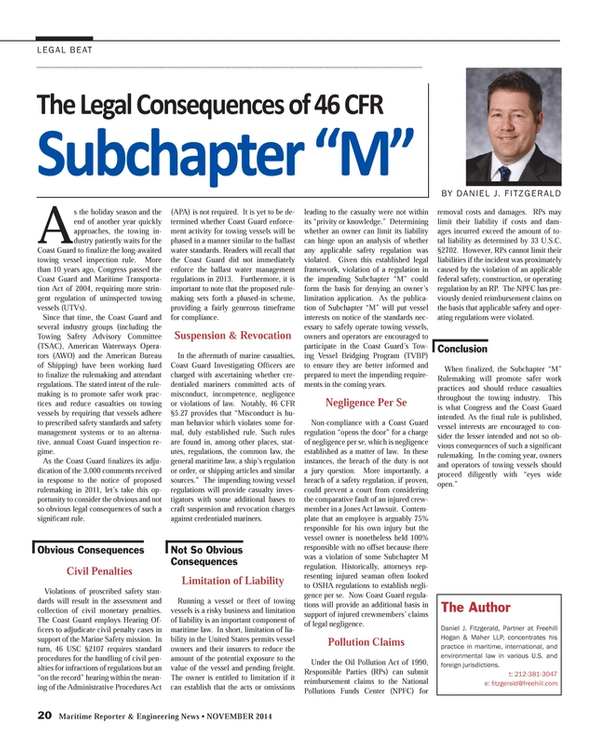