On February 16, 2016, Judge Carl J. Barbier of the United States District Court for the Eastern District of Louisiana granted summary judgment in favor of the various commercial oil spill response companies involved in the federal government’s response to the Deepwater Horizon (DWH) oil spill in the Gulf of Mexico in 2010.  The responders had been sued by numerous individuals claiming that they incurred damages, including personal injury and/or medical monitoring claims for exposure or other injury resulting from the post-explosion and spill clean-up efforts.  Plaintiffs fell into five categories: (1) crew involved in the Vessels of Opportunity (VoO) program; (2) workers involved in decontaminating vessels; (3) other marine personnel not involved in the VoO program; (4) clean-up workers and beach personnel involved in onshore clean-up efforts; and (5) residents who lived and worked in close proximity to coastal waters who alleged exposure to oil and/or dispersants.  The plaintiffs asserted negligence, gross negligence, negligence per se, nuisance, and battery on the part of the responders.  In addition to compensatory damages, they sought punitive damages and declaratory relief; Florida plaintiffs also sought medical monitoring awards, as allowed by state law.

Following extensive discovery, the clean-up responder defendants filed a motion for summary judgment.  Plaintiffs were given one more chance to provide some specificity to their broad claims of misconduct by the clean-up responders but were unable or unwilling to do so.  At that point, the court could have simply dismissed the case on the ground that there was no genuine dispute as to any material fact.  The court noted, though, that the clean-up responders had gathered substantial evidence that their clean-up activities were at the direction of the federal government involving an oil spill of national significance.  Plaintiffs’ counsel objected to admission of that evidence, but the court overruled the objections.

FOSC Authority
The court found that, in accordance with the Clean Water Act, the President had delegated full authority to control the oil spill response to the Federal On-Scene Coordinator (FOSC), including the actions undertaken by private parties.  In accordance with the Clean Water Act, the Oil Pollution Act of 1990 (OPA 90), and the National Contingency Plan, the effective and immediate removal of a discharge and the efficient, coordinated, and effective action to minimize the damage from the discharge are best achieved if the President, acting through the FOSC, directs all levels of response – federal, state, and private – so as to eliminate the confusion that impeded past responses by establishing a clear chain of command and responsibility.  This spill response regime imposes a duty on private entities such as defendant clean-up responders to obey the FOSC’s direction during the response effort.  The evidence clearly showed that the FOSC, after consulting with numerous parties and considering the advantages and disadvantages of the various actions, specifically ordered the various actions, including use of chemical dispersants, involved in plaintiffs’ complaints.
Clean Water Act Derivative Immunity
The court then turned to the application of law to the facts of this spill response.  Parties acting under the direction and control of the federal government in the exercise of legitimate federal authority are entitled to the benefit of derivative immunity.  In other words, if in the exercise of federal authority a federal agency is immune from liability, then a private party acting for and at the direction of the federal agency is also immune from liability.  The Clean Water Act provides: The United States Government is not liable for any damages arising from its actions or omissions relating to any response plan required by this section.  The National Contingency Plan is such a response plan.  It follows that, if the federal government was immune from liability for plaintiffs’ alleged damages, then the clean-up responders who were acting on behalf of the federal government and at the specific direction and oversight of the FOSC are also entitled to immunity.
Federal Tort Claims Act Discretionary Function Immunity
To the extent that some of the claims could have been addressed under the Federal Tort Claims Act (FTCA) if brought against the federal government, the court considered such possibility.  It noted that the FOSC’s decisions during the response and clean-up effort involved an element of judgment or choice and were based on considerations of public policy.  For example, the FOSC engaged in a comprehensive analysis before deciding that the use of dispersants to mitigate the impact of the oil spill was appropriate, requiring a robust assessment of net environmental benefits and monitoring activities at the wellhead, in the benthos, water column, water surface, and along the shoreline.  The court found that these are precisely the types of governmental decisions that are afforded discretionary function immunity and shielded from second-guessing via an action in tort.  As the government would be entitled to discretionary function immunity under the FTCA, it follows that this immunity extends to the clean-up responder defendants.
State Law Preemption
Finally, the court noted that some of the claims brought by the plaintiffs sounded in state law.  Under the Supremacy Clause of the Constitution, federal law may preempt state law when compliance with both federal and state regulations is a physical impossibility or when the state law stands as an obstacle to the accomplishment and execution of the full purposes and objectives of federal law.  Permitting these state law claims to proceed against defendant clean-up responders could cause clean-up responders in the future to refuse or hesitate to provide their services to mitigate the impact of future spills.  It is precisely this second-guessing of the government’s decisions that would stand as an obstacle to federal law.  Thus, the doctrine of implied conflict preemption prevents these types of claims against clean-up responders acting at the direction and with the oversight of the federal government from going forward.
CWA Liability Exemption
The Clean Water Act includes a provision exempting from liability for damages actions taken or omitted to be taken by a person in the course of rendering care, assistance, or advice consistent with the National Contingency Plan or otherwise as directed by the President relating to a discharge or the substantial threat of a discharge of oil or a hazardous substance.  This provision, though, has two important caveats as respects clean-up responders.  It does not apply with respect to personal injury or wrongful death and it does not apply if the person was grossly negligent or engaged in willful misconduct.  In the instant case, plaintiffs’ complaints included allegations that they suffered personal injury and that the defendants were grossly negligent.
Conclusion
The court here, though, sidestepped these issues, finding that implied conflict preemption is consistent with the purpose of CWA liability exemption and going directly to the heart of the matter.  It ruled that since the defendants were acting as agents of and at the direction of the federal government, those defendants could only be held liable for the alleged injuries if the federal government could have been held liable if it had engaged in this conduct directly.  Since the federal government is clearly immune from such liability, it follows that the clean-up responders are also immune.
This well-reasoned decision, a case of first impression, has addressed and overcome the final theoretical obstacle to responder immunity that has haunted clean-up responders since enactment of the Clean Water Act.  While district court decisions have no precedential effect, this one, rendered by a respected jurist, will carry great weight and is expected to resolve the responder immunity question for the foreseeable future.
As alluded to by the court, it is of little moment that we have the most robust spill response regime in the world if no one will show up to do the work for fear of litigation.  That fear has now been largely dissipated.
As published in the March 2016 edition of Maritime Reporter & Engineering News -- http://digitalmagazines.marinelink.com/nwm/MaritimeReporter/201603/ 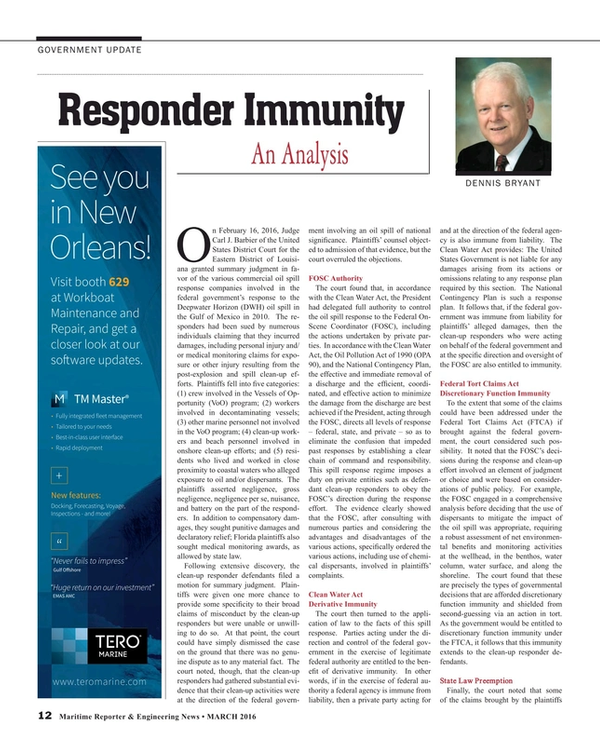 Other stories from March 2016 issue