Inside the World's Top Ferry Lines

The ferry business, unlike more industrial parts of the shipping business, touches wide swaths of the world’s population across continents. The membership of Interferry, the leading trade group for the industry, with non-Governmental organization (NGO) status at the International Maritime Organization (IMO) includes 200+ members from all parts of the ferry spectrum. These include passenger ferries (including fast ferries), Ro/Pax and cruise ferries operating globally.  In selecting “the best” we looked beyond the league tables of “the most” (passengers) and “the biggest” (fleet size). Instead, we identify important trend setters.

Passenger transport on ferries is old news around Europe and Asia, while in North America, ferries are in growth mode. The U.S. Department of Transportation’s Bureau of Transportation Statistics described the boom around San Francisco, noting in a 2017 report: “This resurgence… has prompted the construction of new ferry vessels, terminals, and route segments to create additional transportation options in an area where roadways and other public transportation options are overcrowded, or where there previously was no other accessible public transportation.”
The connection with passengers puts ferries into the public consciousness. Not surprisingly, leading operators are at the forefront of a leading trend: sustainability, where LNG fueling is gaining traction. Alternative fuels, methanol and battery power are also moving from naval architects’ wish-lists, past the drawing boards to actual deliveries. The ferry business is not all about relaxing journeys; ferry companies are not immune from geopolitics. As we go to press, concerns about the logistical implications of Brexit are looming large around docks in the United Kingdom and northern Europe.

The LNG wave, which brings reduced emissions of sulfur, nitrogen and particulates, along with decreased costs amidst abundant gas supplies is occurring across geographies. Gas makes sense for ferries, which operate in predictable routes, enabling certainty of fuel supply, usually in coastal regions, often with tight emission standards.  The first LNG fueled ferry was Viking Lines’ Viking Grace (2,800 passengers, 500 cars, 75 trailers), delivered in 2013 from the former STX Turku, and presently in the Stockholm/ Turku run across the Baltic Sea. 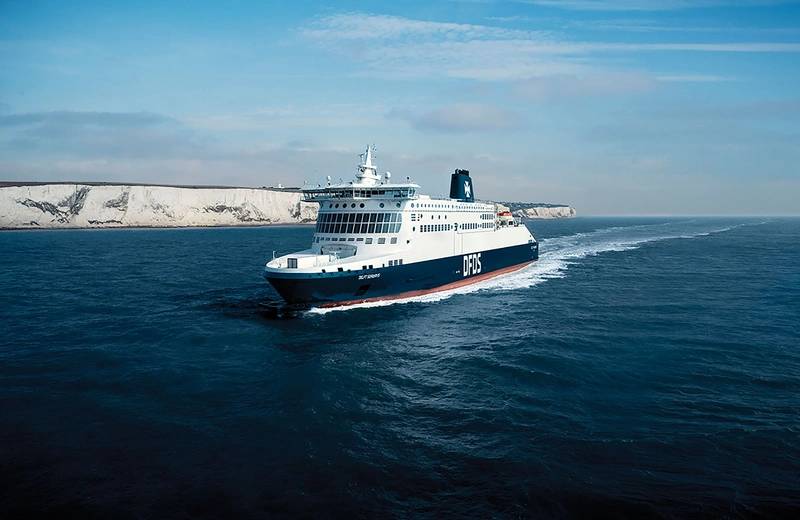 In North America, BC Ferries, with routes serving the Canadian coast from Victoria (at the bottom of Vancouver Island, across from Washington State) up as far as north as Prince Rupert, is converting two of its largest vessels to LNG. Its Spirit of British Columbia (2,100 passengers/crew and 358 cars capacity) returned to service in June, 2018 after being converted at the Remontowa Ship Repair Yard S.A., in Gdansk to run on LNG. The vessel is serving the Vancouver (Tsawwassen) to Victoria (Swartz Bay) run. Its sister vessel, Spirit of Vancouver Island, is expected to complete its conversion in mid 2019. Three smaller vessels, dual fueled with LNG or low sulfur diesel fuel, Salish Orca, Salish Eagle, and Salish Raven (each 600 passengers/ crew and 138 cars capacity serving other parts of the system) were delivered to BC Ferries from the Polish yard, all in 2017.

Ferry operators in the San Francisco Bay region are at the forefront of moves to non-fossil fuel sources, especially renewable diesel (fuel made from animal fats and greases, for example). A number of the operators around the Bay Area are in the early stages of this transition, in 2019- these include private operators Hornblower,  Golden Gate Ferry, Blue and Gold, and the municipal operator San Francisco Bay Ferry – operated by the Water Emergency Transportation Authority (WETA). In September 2018, Red and White Fleet, another private operator, launched Enhydra, a 600 passenger (built by  Bellingham, Wash., yard  All American Marine) powered by lithium batteries- with redundancy provided by a Cummins (EPA Tier 4) diesel engine. Red and White is also constructing an experimental vessel powered by hydrogen fuel cells.

Washington State Ferries (WSF), operates an extensive system 24.5 million people a year. Its landside hubs run to islands stretching from Point Defiance (near Tacoma) northward to Puget Sound and further out to the Olympic Peninsula and Swartz Bay (Vancouver Island). The system had previously been exploring LNG conversions, and is now looking at battery power. In January, 2019, WSF released a Strategic Plan looking out to 2040. The operator, part of the state’s Department of 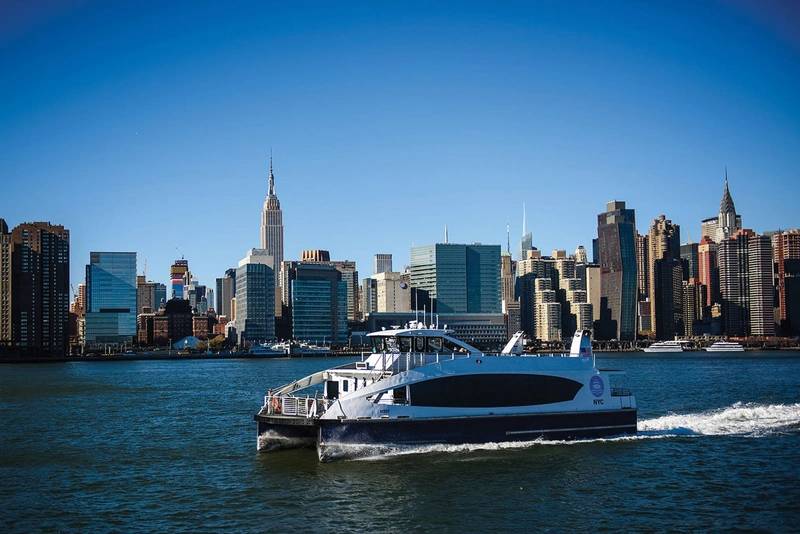 Photo Credit: NYC Ferry Transportation, says: “More than half of Washington State Ferries’ 23-vessel fleet is scheduled to be retired by 2040. The ferry system needs 16 new vessels in the next 20 years, including 13 ferries to replace vessels due for retirement and three additional vessels to fill in when other ferries are out for maintenance and to respond to growth.” WSF says that its plan “…calls for electrifying the ferry fleet to reduce fuel use, emissions, noise and maintenance costs.” Class society DNV GL, working alongside state officials in its “Maritime Blue” initiative, cite the electrification (borrowing from concepts being developed for Norwegian vessels operated by Color Line and others) as a key demonstration project.

In New York City, a new ferry network begun in mid-2017 (operated by West Coast based Hornblower Cruises), reaching areas inaccessible by subways and bus routes, has greatly exceeded initial expectations. Statistics from the burgeoning NYC Ferry show a passenger count of at a 6 million annual rate in mid-2018 ; ridership in 2023, as new services come online, is projected to be 9 million.
European operators are among the largest (qualifying them for a traditional “Top 10”) but also among the most forward thinking- gaining them a mention here.

The Spanish ferry operator Baleària (which connects mainland Spain with the Balearic Islands and with Northern Africa) has developed a strategy which couples newbuild orders for gas powered vessels with conversions of existing ferries to dual fueling. In 2017, Baleària ordered two LNG-fueled ferries from the Italian yard Cantiere Navale Visentini, after a 2016 order gas powered ferry from the Spanish shipyard LaNaval.  In late 2018, it announced a plan to convert five existing ferries, Naples, Abel Matutes, Sicily, Bahama Mama and Martín i Soler- to dual fuel propulsion over a three-year span. The two other LNG fueled vessels, Hypatia de Alejandría, and Marie Curie (each 800 passengers, 150 cars and 2,100 lane meters for cargo)  are also being readied for early and mid-2019 deliveries from the Italian yard.

Baleària also announced plans to build an LNG fueled 1,200 passenger catamaran fast ferry for Mediterranean service at the Armon shipyard in Asturias (in northern Spain), with delivery for mid-2020.

Stena Line, an industry stalwart, is a major catalyst as the ferry industry switches over to the cleaner fuels. Stena Line has ordered a half dozen vessels from the Avic International yard in China for delivery through 2021, five of which are “LNG ready” while a sixth vessel in this “E-Flexer” series of RoPax vessels  ( 1,000 passengers,  3,100 “lane meters”, or approx. 1,300 cars), ordered in mid-2018, will run on LNG (dual fueled).
The new ship be delivered into a 10-year charter to Brittany Ferries, running between Portsmouth, on the English Channel, and Bilbao - Santander, in Spain. Stena Line will operate three of the E-Flexers in its runs across the Irish Sea; another will be chartered long-term to the Danish outfit DFDS (on the cross-Channel Dover/Calais route). 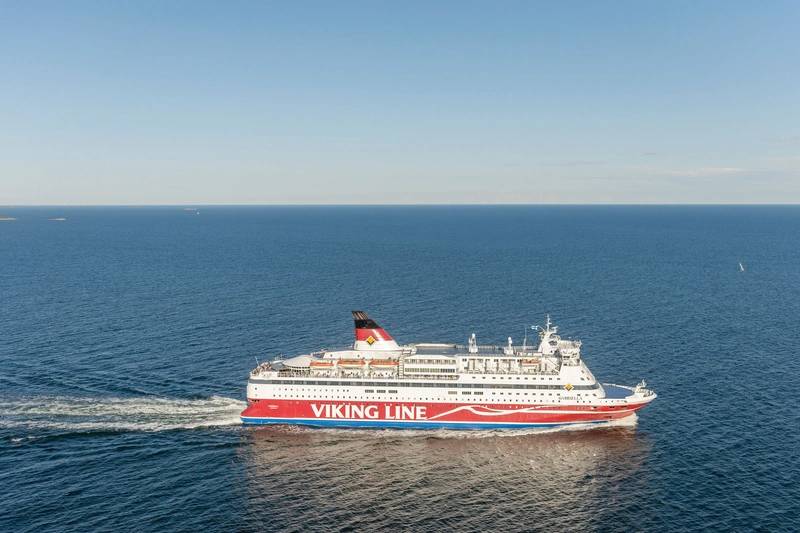 Viking Gabriella runs between Helsinki, Finland and Stockholm, Sweden. Photo: Viking LinesThe fifth will also be put into a Brittany Ferries charter (also on the run between the UK and Spain). In 2017, Brittany Ferries had ordered an LNG fueled vessel, Honfleur, 1,680 passengers, and 2,600 lane meters (roughly 1,000 cars) from the Flensburger yard, for delivery in Q2 2019. The vessel, with a price at around $230 million, will run between Portsmouth, and Caen- on the Normandy coast.In 2015, Stena Line had converted its Stena Germanica to run on methanol at the Remontowa yard. The vessel services the Gothenburg/Kiel run. With a corporate focus on sustainability, it is also moving towards electrification – with its Stena Saga now tied in to the electrical grid during port calls in Oslo, 14 of its 38 vessels can now connect to electricity during port visits.In future years as attention to sustainability becomes standard practice, further electrification, digitalization and then-automation will likely drive “Top 10s.” As a prelude, Finferries, which serves ports throughout Finland, announced a successful demonstration of autonomous operation (in conjunction with Rolls Royce) on the double ended car ferry Falco on a short voyage between two ports in the archipelago south of Turku. Wartsila has conducted a similar project in the fjords south of Bergen, Norway- demonstrating autonomous capability, on the hybrid powered Folgefonn, owned by Norled. Rolls Royce is working with Fjord1 on a similar project. 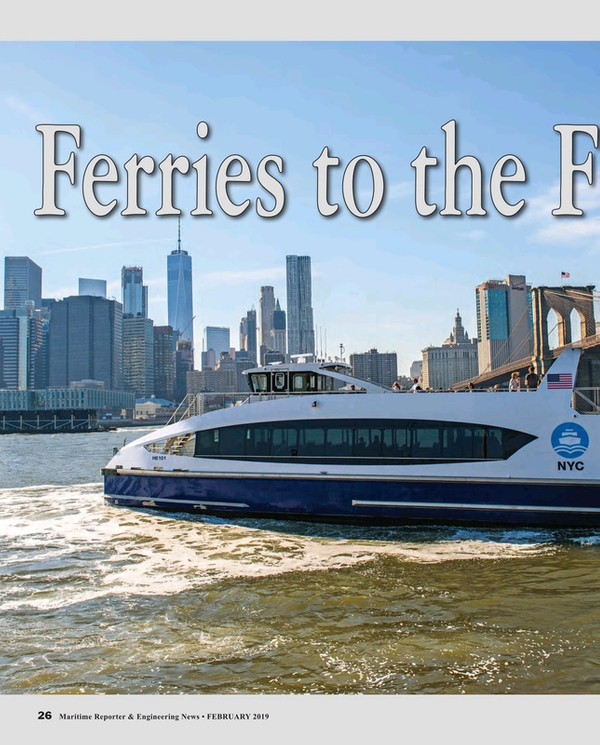