Seafarers Are Key Workers: It’s “All Hands on Deck” @ WMU to Solve the Seafarer Crisis

Dr. Cleopatra Doumbia-Henry, President, World Maritime University, discussed the ongoing seafarer crisis plus the new report from WMU, A Culture of Adjustment, which outlines systemic failures in the implementation of the regulatory regime for seafarers’ work and rest hours.

Search as you like, but you will be hard-pressed to find anyone as passionate about all matters surrounding maritime and seafarers than Dr. Cleopatra Doumbia-Henry. Prior to taking the helm as president of the World Maritime University (WMU) six years ago, she served as the Director of the International Labor Standards Department of the International Labor Office (ILO) in Geneva, Switzerland, responsible for developing the Maritime Labor Convention, 2006. That makes the current COVID-19 induced seafarer crisis even more topical and personal, as nearly half a million seafarers remain stranded at sea, far beyond the expiration of their contracts, with no global consensus to allow for efficient maritime crew changes and transfers.

“Seafarers are key workers, they are essential to keep global commerce running,” to ensure food and fuel is delivered when and where it is needed, Dr. Doumbia-Henry said in a recent interview with Maritime Reporter & Engineering News. “There are a few countries that have taken action (to help enact crew changes), but we still have the majority of the countries who have not taken the necessary action.”

While the situation has been discussed ad nauseum, little progress has been made to help enact any semblance of normal crew changes.

Hopefully this is changing as on December 2, the 193-member U.N. General Assembly urged all countries to designate seafarers and other marine personnel as key workers, a unanimously adopted resolution which encouraged governments to ensure safe ship crew changes and travel, allowing stranded seafarers to be repatriated and others to join ships. Welcoming the adoption of the resolution, IMO Secretary-General Kitack Lim said in a release “Sadly, hundreds of thousands of seafarers, who are vital to maintaining supply chains, remain stranded at sea for months beyond their contracted time. This is causing immense strain, fatigue and exhaustion and is unsustainable. This is a human rights issue. Seafarers’ lives are being made impossible through the crew change difficulties and this can only have a detrimental effect on ship safety and on the supply chain, the longer the situation continues.”

While the resolution is a step in the right direction, cohesive action by more countries is needed. 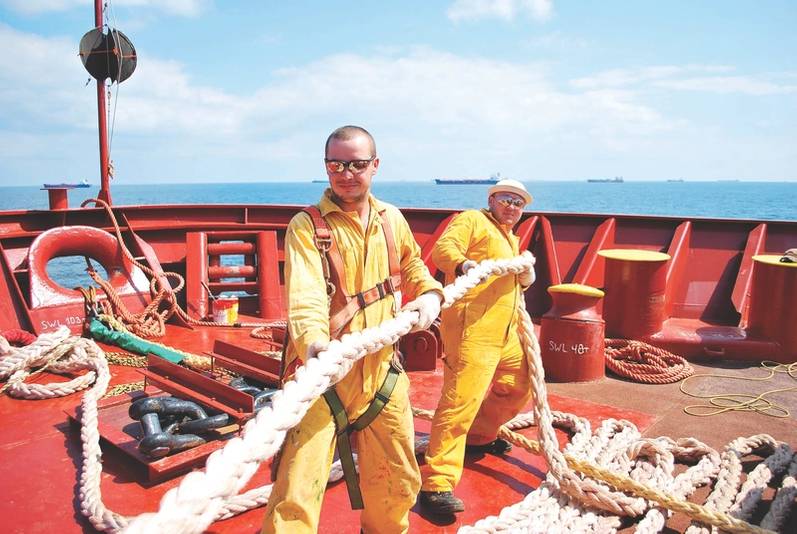 “Seafarers are key workers, they are essential to keep global commerce running,” to ensure food and fuel is delivered when and where it is needed, Dr. Doumbia-Henry said in a recent interview with Maritime Reporter & Engineering News. © andrej pol/AdobeStock

The World Maritime University was created in 1983 after the IMO recognized within IMO that there was a shortage of well-qualified, highly educated maritime experts, particularly in lesser developed nations. To that end, WMU graduates are spread around the world, many occcupying top spots in their respective country’s government and naval organizations, as well as maritime, shipping and port industries. It is the depth and breadth of this global alumni that Dr. Doumbia-Henry is counting on to provide information and influence to help solve the maritime industry’s most pressing matters.

“I have written a lot of articles, I have made a lot of speeches and we all understand the pandemic is having a huge impact” said Dr. Doumbia-Henry. “We have to (continue to) disseminate the message, not just by me talking and making a speech, but by getting our own hands on deck, all our students from around the world.”

To this end, WMU has hosted several webinars with its graduates to implore them to take action in their individual home countries or countries of domicile, to bring this matter to the fore and help to find a solution. “Most WMU students come from the developing world," said Dr. Doumbia-Henry. “They are the agents of change that can intervene, to help bring the seafarer crisis to the minds of leaders and help to devise a solution.”

A sweeping new report from WMU entitled ‘A Culture of Adjustment,’ examines seafarer work and rest hours, a report which confirms previous research that suggested recording malpractices are widespread, which seriously questions the capacity of the current regulatory framework to prevent fatigue and mitigate its effects. These deficiencies are magnified exponentially by the strain of COVID-19, and the analysis indicates that insufficient manning is the root cause of violations especially during peak workload conditions. “There is still a culture of malpractice in terms of recording of hours of work and hours of rest,” said Dr. Doumbia-Henry. That malpractice is a “huge concern and it is also very dangerous,” not only for the health and well-being of the seafarers but also for shipping itself. “We are all part of a chain and these people (seafarers) are important. This is the time for us to say seafarers are indispensable to world trade. You need them to keep your economies afloat.” 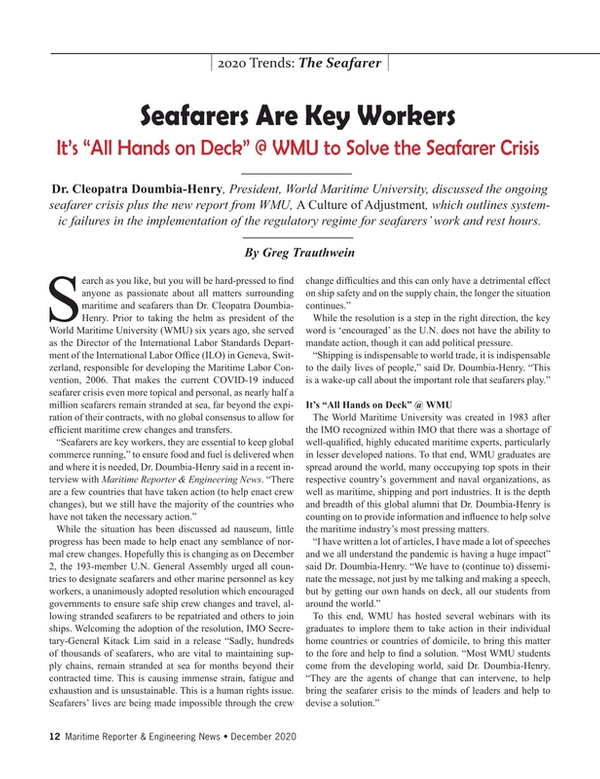 Read Seafarers Are Key Workers: It’s “All Hands on Deck” @ WMU to Solve the Seafarer Crisis in Pdf, Flash or Html5 edition of December 2020 Maritime Reporter

Other stories from December 2020 issue