Heger Dry Dock Gets to Work on AFDM for U.S. Navy

Born in 1998 and celebrating its 25th anniversary in 2023, Heger Dry Dock holds a unique position as one of the few engineering firms in the world dedicated to the design and lifecycle engineering of drydocks, primarily floating dry docks. Premal Shah, P.E., President and Principal Engineer, discussed some of the company’s recent contract wins with Maritime Reporter & Engineering News.

While all of its business is in the U.S., it has experience internationally, designing drydocks for customer that have had them built outside the country. “There is simply not enough capacity in the U.S. shipyards to build something large [like a drydock],” said Shah. “Most of the larger shipyards in the U.S. are busy building Navy ships, so they don't want to take time away from their workforce to build a one-off dry dock. So most of our large designs get built elsewhere outside of the U.S.”

While the capability to build the drydocks lies mostly outside of the U.S., Shah estimates there is a high demand for the units in the U.S., a “shortage of dry docks.” A strong driver recently has been the U.S. Navy and its shipyard infrastructure optimization program (SIOP), which is working to identify – and help alleviate – bottlenecks that it sees in the coming 20 to 30 years, particularly as it embarks on a substantial shipbuilding program through 2035.

While graving drydocks have a much longer life span, with units built in the 1920s and after still active, they represent mammoth civil engineering projects with similarly sized mammoth budgets in dollars and manpower. A floating drydock has a much more modest life-span – 50 years or more if properly maintain, but a similarly sized floating unit is much cheaper. 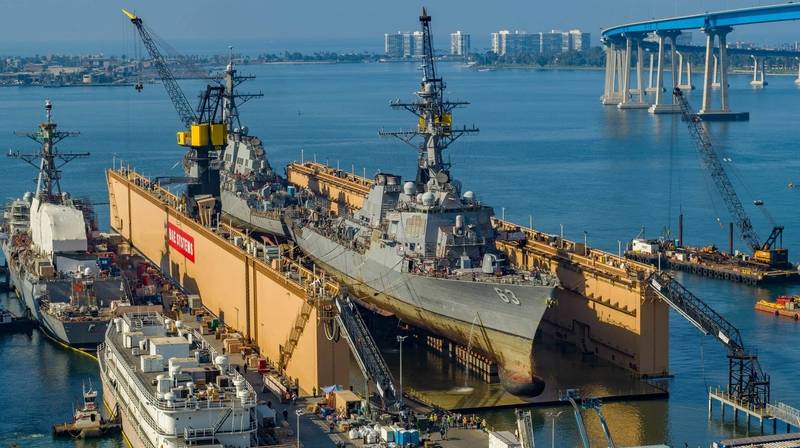 “The main driver is the cost. Let's say you're setting up a shipyard from ground zero and you want to invest in a dry dock that can lift a substantial capacity vessel,” said Shah. “A graving dry dock is 10 to 15 times more expensive than a floating dry dock. From a capital investment perspective, it makes more sense to have a floating dry dock.”

“I can't remember the last time anybody designed or built a graving dry dock for a commercial yard,” said Shah. “But the Navy, of course, can afford them, and they're looking for longevity.” He notes that most of the Navy yards do not operate a floating dry dock.

Depending on vessel size, there are other options to dry dock a vessel, with travel lifts, ship lifts and marine railways offering solutions. But if you are targeting vessels in your business model that are over 10,000 tons, “your only options are a floating dry dock or a graving dry dock,” said Shah.

Heger Dry Dock has a long list of projects and clients over the past 25 years, but a more recent contract to build a U.S. Navy asset, an Auxiliary Floating Dry Dock Medium (AFDM), is keeping the company busy. Measuring 700 x 160 ft. with a lifting capacity of 18,000 long tons, the AFDM will be designed to accommodate destroyers, cruisers, the new LCS type vessels which are homeported in and around San Diego.

“There were a bunch of them [drydocks] built in the 1930s and 1940s, and there were some other smaller dry docks built in the 1960s,” said Shah. “But nobody has designed or built an AFDM or any kind of floating dry dock for the Navy in the past 40-plus years.”

Heger Dry Dock were recently awarded a new AFDM design project along with its design-build partner in Mobile Alabama, Austal USA. “So we're designing this AFDM, which is a significant project for us because nobody has done this in a few decades,” said Shah.

When built at Austal in Mobile, the AFDM will be located at the naval base in San Diego.

“Once it's all done, it will be a huge feather in our cap, because a privately held company has not designed a floating dock for the Navy in many decades,” said Shah. 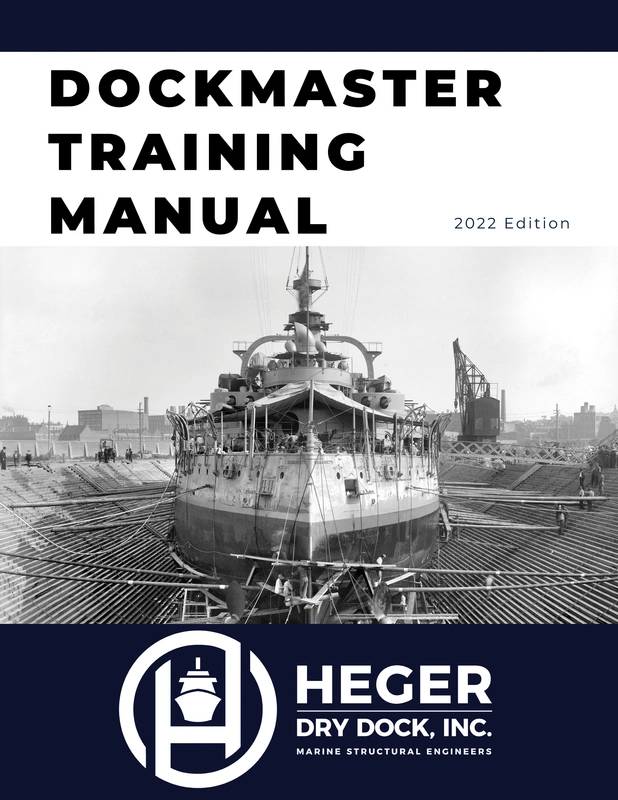 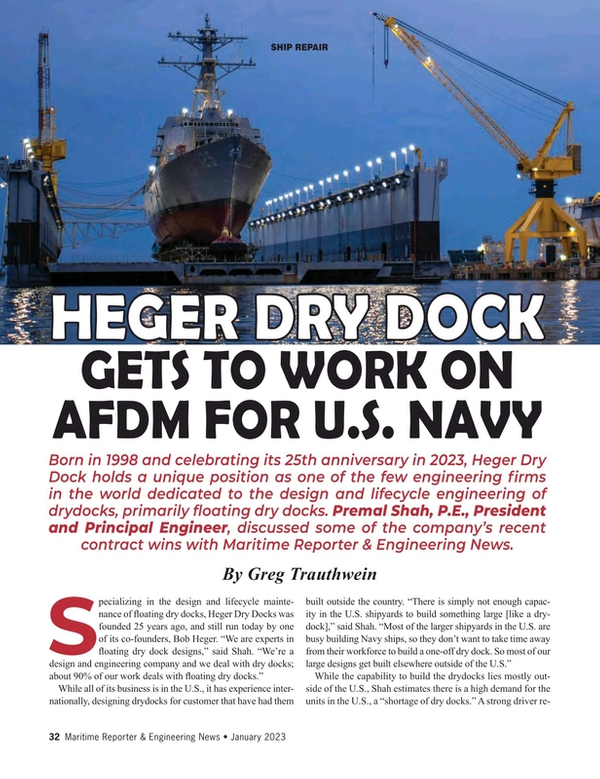 Read Heger Dry Dock Gets to Work on AFDM for U.S. Navy in Pdf, Flash or Html5 edition of January 2023 Maritime Reporter

Other stories from January 2023 issue