By the Numbers: Oil Spill Response

An explosion aboard the Mobile Offshore Drilling Unit Deepwater Horizon on April 20, 2010 set off a chain of events that led to its sinking and subsequent oil spill. That same day, the DHS Secretary declared the Deepwater Horizon incident a Spill of National Significance (SONS). Eventually, at least 47 offers of International assistance were received. Response to the incident required extraordinary coordination, a coordinated effort to secure the well, contain and clean up the oil among all stakeholders. This incident tested, and in some cases exceeded, the limits of the Nation’s oil spill response resources and capabilities developed after the 1989 Exxon Valdez oil spill. The scope and duration of the Deepwater Horizon oil spill presented complex challenges which eventually provided the catalyst to adapt proven technologies, employ new ones and apply changing response tactics.

The event provided an excellent opportunity to evaluate the effectiveness of existing oil spill response doctrine, capabilities and the Nation’s state of preparedness in responding to a very large oil spill. The ISPR concluded that, while there is intense interest programmatically (and politically) following a large spill event, interest quickly wanes as new challenges arise. This event has attested to the Coast Guard’s need to renew its emphasis on oil spill planning, preparedness and response. Moreover, the ISPR concluded that the Coast Guard’s marine environmental response (MER) preparedness and response programs have atrophied, probably as a result of (a.) competition with the service’s enhanced homeland security responsibilities, (b.) the unintended consequence of placing many new people with little or no program experience into MER positions and (c.) was exacerbated, ironically, by the success of Oil Pollution Act of 1990 (OPA 90) driven prevention programs. Spill prevention initiatives for vessels and offshore facilities have been largely successful, resulting in fewer offshore spills and much less frequency between large spill events. This success has resulted in fewer Coast Guard personnel having large spill experience.

(As published in the April 2013 edition of Marine News - www.marinelink.com) 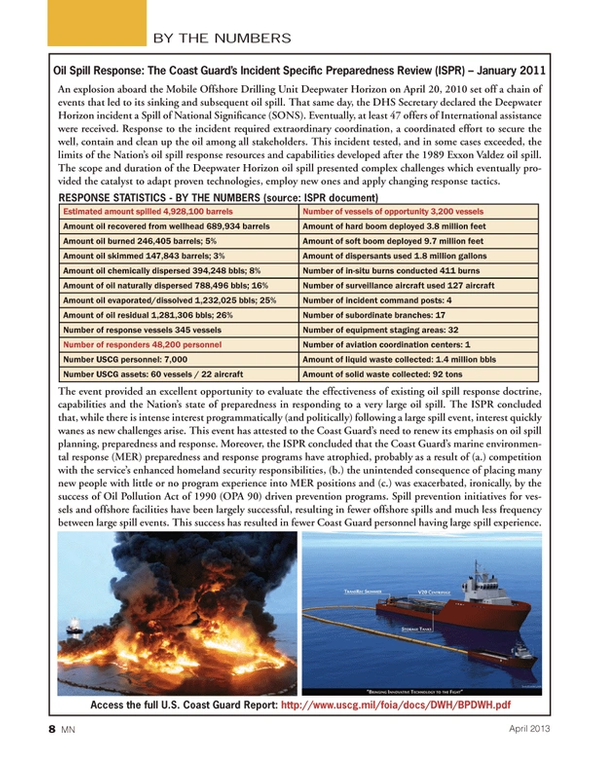