How much can change in one generation? Let’s take a look at the current generation entering your workforce born between 1980 and 2000; the Millennials. This generation grew up rarely hearing the phrase, “You can’t do that.” They have always known what a computer is, have no concept of the breakthrough of the bag phone and are just now discovering that records (vinyls) have songs on both sides. Easy access to infinite knowledge has always been at their fingertips via the internet. Their world has always held limitless possibilities because of technology. How odd it must seem to Millenials that with the world a thumb click away on a computer that fits in their pocket, the offshore industry (and the rest of the United States) is forced to rely on decades-old information regarding potential offshore oil and gas reserves on approximately 85% of the outer continental shelf (OCS).
The long-overdue Final Environmental Impact Statement (EIS) for Atlantic Seismic activity represents a first step in a scientific and technologically advanced approach to making decisions in the OCS. It may kick off a modern day assessment of the oil and natural gas resources in areas that have long been off-limits, like the Atlantic OCS. Unfortunately, this EIS is not connected to a lease sale, which may drastically limit its usefulness. Thus, it is not about drilling or even the production of oil and natural gas. It is simply about information gathering-- information that will allow our legislators and Administration to make the science based decisions they so proudly promote.
Modern day seismic data is collected by technologically advanced ships that utilize devices to produce sound waves aimed at the sea floor and picked up by receivers towed behind the ships. Previous techniques, much like ultrasound, were 2-Dimensional and did not produce data as accurate as that produced using today’s 3-Dimensional and better technology. As an example, let’s look at the Gulf of Mexico, where nearly all of the offshore oil and gas production takes place in the United States. Data collected from the Gulf using 2-D seismic in the 1980’s proved to be way off. In fact, due to technological advances in seismic imaging and well as drilling and production, we have already produced more than five times more oil from the Gulf than was originally thought to exist.
Some opposed to the Atlantic Seismic EIS express concern that seismic testing will harm wildlife. In the name of science and conservation, seismic testing is closely monitored by both the federal government and industry. Human scanners are present 24/7 during testing and ensure that the area is clear of visible animals before the testing begins. As the testing begins, the seismic sounds are ramped up so any undetected wildlife has the ability to leave the area. If an animal is spotted during seismic testing, the operation is promptly shut down and only resumed once sensitive wildlife has left the testing area.
Studies have shown that some fish and mammals may temporarily leave an area during seismic testing, but are in no way harmed. A report by the National Academy of Sciences’ National Research Council revealed that, “No scientific studies have conclusively demonstrated a link between exposure to sound and adverse effects on a marine mammal population.” Even the Bureau of Ocean Energy Management (BOEM) has stated in a final Supplemental Environmental Impact Statement for Gulf of Mexico Oil and Gas Lease Sales that, “there are no data to suggest that activities from the preexisting OCS Program are significantly impacting marine mammal populations.”
Proponents of the EIS point to the potential benefits of exploration and possible production of offshore oil and gas resources, if they are found in economically viable quantities. On top of increased domestic energy security, there is enormous potential for increased economic activity, increased revenue for government, and increased jobs. According to a recent report from the Institute for Energy Research, opening the Atlantic OCS to oil and gas activity could increase U.S. economic output by nearly $8 billion per year from 2013-2021 and $33 billion each year thereafter. That not only means much needed revenue being pumped into our economy to pay down debt but nearly 40,000 jobs created each year for the first eight years and over 160,000 jobs created each year thereafter. That is over 1.44 million new jobs for a generation raised with access to limitless information and hungry for work.
The Atlantic Seismic EIS matters because it opens the door to the collection of information that will allow the Millenials and other generations the opportunity to decide whether and where it may or may not be appropriate to explore for and extract oil and gas in the Atlantic. How completely ridiculous it must seem to Millenials that in today’s technologically advanced and information hungry society, we are using oil and natural gas estimates for most of the OCS based on seismic data that was collected with technology that predates their birth.
However, as good as the new seismic methods are; the true test of producing much needed energy for our nation will only come with actual physical exploration and development. That process will only take place if there is an actual lease sale in the mid and south Atlantic or Eastern Gulf of Mexico.  Current projections of energy use for the next generation indicate that even with a much greater emphasis on nontraditional forms of energy such as wind, oil and natural gas will still be a major energy source and will be needed to supply the energy market and jobs. Nontraditional sources will only supply about 15% of our energy in 2035. New technology not only benefits the Millenials, but such technology allows exploration and development of oil and natural gas in new areas in a safe and efficient manner. For this generation and the following generations, we need to explore more of our outer continental shelf.

Randall Luthi became President of the National Ocean Industries Association (NOIA) on March 1, 2010.  An attorney and rancher from Freedom, Wyoming, Luthi has had an exciting career holding various positions ranging from Wyoming Speaker of the House, director of a Federal agency, legislative assistant in the U.S. Senate, and as an attorney at both the Department of the Interior (DOI) and the National Oceanic and Atmospheric Administration (NOAA), where he worked on natural resource damages following the Exxon Valdez accident. Luthi most recently served as the Director of the Minerals Management Service (MMS) at DOI from July 2007 through January 2009.

(As published in the April 2013 edition of Marine News - www.marinelink.com) 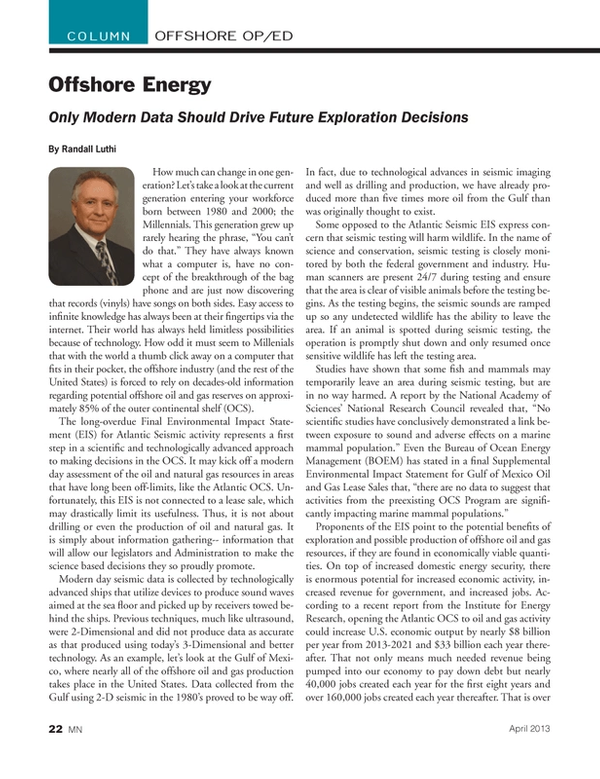