Class NK’s subM Strategy: Help is on the Way

America’s Inland operators, faced with the coming scrutiny of Coast Guard subchapter M regulations, have also stood largely on the sidelines as service providers announce one subM solution after another. Software providers, consultants and marine surveyors all claim to have the answers to a problem that has not yet arrived because the U.S. Coast Guard’s preliminary language has not yet been approved. In the meantime, there is a new kid in town. Out in front of the new regulations, ClassNK has served notice that it will not be business as usual on America’s inland waterfront.
The longtime leader among global classification societies in terms of tonnage, ClassNK, also quietly classes an impressive amount of brown water, inland tonnage. This coupled with its recognized leadership in the bulk trades makes Class NK an ideal choice to enter a sector sorely in need of that expertise. Hand in hand with its steady move into other untapped global markets, ClassNK is also quietly positioning itself to serve the U.S. inland operator.
The non-profit service organization today remains 100% dedicated to the maritime industry with more than two-thirds of its global staff qualified as maritime surveyors, naval architects, mechanical engineers, or all three. With quality at the heart of its many missions, Class NK’s entire R&D budget – nearly $60 million in 2012 – goes entirely to maritime related research and is largely used to fund joint research with companies throughout industry. As such, for those still looking to solve the mysteries of subchapter M, the search for a viable source of expertise may have just ended.

An Impressive Year: And Poised for Another
Nearly 1,000 vessels and more than 25 million gross tons joined the ClassNK register in 2012. And, as impressive as that benchmark might seem, ClassNK’s expanded U.S. Coast Guard authorization(s), received earlier, this year are arguably more important. A rapidly opening door to the American markets, coupled with the new inland subM rules could set the stage for even bigger things to come.

Local Partnerships, Strategies
ClassNK began planning for the new regulations with inland operators in 2009. The acquisition of Maine-based SMSLLC in March is a continuation of that effort. Since 1996, Safety Management Systems, LLC (SMSLLC) has provided consulting services to maritime, transportation and related industries. Now, as part of ClassNK’s expanding global operations, SMS LLC eases ClassNK’s entry into the world of subchapter M and inland shipping.
ClassNK next turned its attention to further developing the relationships that it has been fostering since opening its New York office in 1962. As well as being the world’s largest class society, ClassNK classifies some 35% of the world’s bulk carriers and also has an impressive roster of inland and brown water vessels. The global giant remains bullish on the future of America’s brown water shipping, especially with the expansion of the Panama Canal looming large in the porthole.
According to ClassNK, one key area of subchapter M implementation is going to be price. And, while safety management ultimately helps reduce costs for operators, implementation presents a cost to owners. To that end, ClassNK runs a lean operation that is focused on providing high quality service. For example, all surveyors are not only trained to conduct ship surveys but also ISM, ISPS, and MLC audits. The addition of subchapter M audits and implementations to that suite of services would therefore be a natural follow-on. Beyond that, ClassNK understands that their mere presence in the market provides owners a greater range of choices and via competition, keeps prices down. Says ClassNK Chairman Noboru Ueda, “If our presence can help reduce the burden of compliance on the industry, than we consider that a success.”

Subchapter M – Mapping the Solution
In advance of the final Subchapter M rule, ClassNK realized that many owners want to get ahead of the curve. The partnership with SMS LLC allows ClassNK to be involved early in the process, providing owners with comprehensive services to assist at every stage of the process.
And, while ClassNK is very focused on subM and the brown water markets, the SMS LLC transaction is also rapidly emerging as a cornerstone for ClassNK’s total push into North America. Leveraging the SMS LLC local connections, ClassNK will eventually perform subchapter M certifications and inspections. SMS LLC, with years of crafting ISM, ISO and management system solutions to blue water clients, will formulate compliance solutions designed specifically for each client. SMS LLC Director of Operations William Mahoney told MarineNews in April, “We’ve seen what works and what doesn’t. You have to be able to tailor it to the client.” Alluding to the push by some firms to make software the primary basis for compliance, he added, “Software will not have as a big a role as people think it will. If used judicially, and if it fits into your IT infrastructure, then it can work. That said, directing clients into a rigid solution doesn’t serve every client well.”
Looking ahead towards implementation of the final rule, Mahoney has advice for those just setting sail. “The SMS method may be especially attractive to smaller outfits that are comfortable leveraging the towing vessel record. On the other hand, the ‘middle market’ may be most drawn to a canned solution – the easy way. But, the solution needs to be sustainable. It is one thing to pass the initial audit and another thing altogether, to maintain it. We appeal to both ends of the spectrum; those who are quite small and those very large companies who can afford the customized solution. Many of these companies are already doing the right things. We believe in leveraging the good that’s already in place.”
Mahoney’s team will defer to ClassNK on technical items and focus on management systems, bringing lessons learned in blue water to inland operators. And, although their clients primarily   include tankship and general cargo operators, that’s not to say that they have no brown water roots. The Staten Island Ferry has been a client since 2005. The new relationship will require additional personnel, and like ClassNK’s North American group, SMSLLC will hire additional talent in the near term.
ClassNK will also leverage ‘lessons learned’ from its considerable international reach. The blue water emphasis, for example, has been on the implementation of the International Safety Management (ISM) code. ClassNK was deeply involved with its development, annually conducts more than 5,000 vessel ISM audits, and arguably offers unmatched experience with safety management. Says ClassNK Chairman and President Ueda, “It’s that experience and understanding that we hope to offer to owners and operators on America’s rivers. “

ClassNK: Focused on Maritime, Growing in North America
As some classification societies expand beyond their traditional roles, ClassNK looks on with interest. Bureau Veritas, for example, has become a massive global organization, and maritime is just one of many business sectors. The merger of DNV and GL promises the beginning of another such organization. Ueda said recently, “Their success and growth outside traditional ship classification is truly impressive. For us at ClassNK, we are solely focused on the maritime industry.” He adds that the number of new treaties and regulations entering into force will provide more than enough opportunities for ClassNK to continue its growth in core markets.
It might come as surprise to some domestic operators, but ClassNK has total of nine offices covering most American ports, including the Pacific Coast and Columbia River, Atlantic Coast, St. Lawrence Seaway, the Gulf Coast, the Mississippi River, and Great Lakes. ClassNK surveyors annually carry out more than 1,000 surveys and audits in North America, serving not only the U.S. Coast Guard and U.S. flag interests, but also more than 100 different foreign governments.
Referencing the coming Subchapter M regulations, Uedu added, “This is an important step forward for the brown water industry, and we realize this will be a major transition for many owners and operators. We are in the process of developing new updated training programs to ensure our surveyors can effectively translate their extensive experience in ISM/ISPS safety and security management certification to assist the brown water industry when the new Subchapter M regulation comes into effect.”
With a subtle nod towards the potential competition posed by other classification societies, Ueda had this to say: “We have steadily added new staff and expanded our service network as our workload in the U.S. has grown, and with the implementation of the new Subchapter M regulation, we will be increasing our staff and expanding our service network to better cover the US river system. We are currently looking into strategic locations for new offices to expedite the TSMS Certifications along the Mississippi and Columbia River networks, and we expect to have new offices in place well prior to the implementation of the new Subchapter M regulation.

On the Horizon
Like everyone else, ClassNK and SMS LLC will be looking to achieve subM audit and inspection approvals when and if they come. Nevertheless, SMS’ Mahoney says, “The final rule has to come first. I would be surprised if that happens in 2013. People have time and they need to take a deep breath.” Mahoney adds that he and his colleagues have worked alongside ClassNK in the past, they are familiar with one another, and that the recent acquisition of his firm was a logical manifestation of a longstanding relationship. That relationship could eventually develop into many more in the United States. Making friends and helping them, all along the inland waterways: That’s the real plan at ClassNK. 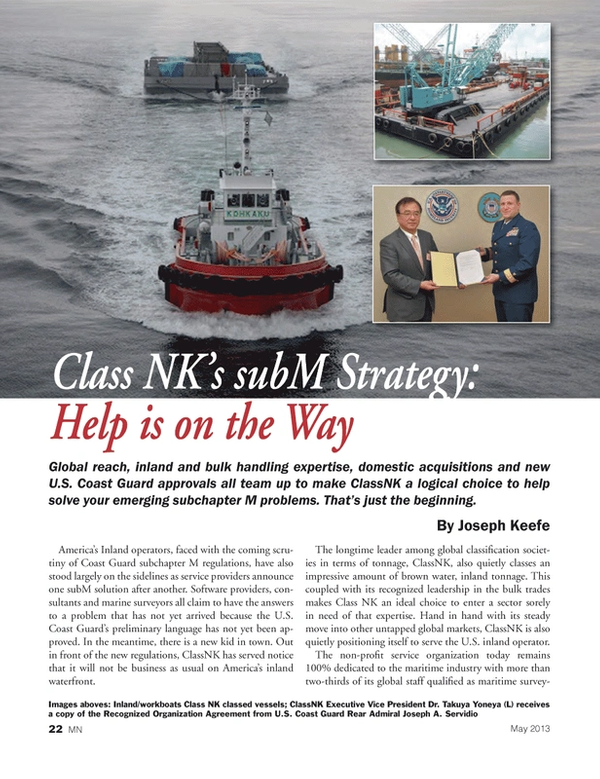 Read Class NK’s subM Strategy: Help is on the Way in Pdf, Flash or Html5 edition of May 2013 Marine News