Amelia Island, Florida: At the second annual Workboat Exchange, held in April at the Ritz Carlton Hotel on beautiful Amelia Island, Florida, about 160 marine buyers and sellers alike got a full taste of the best food, weather and accommodations that the Sunshine state has to offer. At the same time, they also got a full dose of reality when it comes to the eventual implications of the subchapter M rules. Maritime attorney and consultant Gary English led the attendees through a comprehensive primer on who will be impacted, why, and what it is likely to cost inland marine operators to comply. In short, the long term, downstream impact on the industry was laid bare to the bone.
In advance of the (now) annual two+ day event that brings marine buyers (fleet operators) and suppliers (equipment vendors) together in a unique setting that guarantees both parties personal and up close business meetings and introductions, the keynote speech given by English gave them plenty of reason to do so. He started out by explaining that Subchapter M ultimately affects US Flagged vessels pushing, pulling or hauling alongside, towing vessels moving commercial barges – especially those towing oil & other dangerous and combustible cargos, and vessels providing harbor assist services to large commercial ships. That’s because the preponderance of casualties reviewed by the Coast Guard involved these vessels. And, also according to English, the greatest potential for casualties that cause permanent injury or death to humans, economic impact to the maritime transportation sector, and/or environmental damage is greatest due to the nature of the service. Bottom line: it is going to be expensive.

Subchapter M and You
The Coast Guard and Maritime Transportation Act of 2004 (Aug. 9, 2004), established new authorities for towing vessels. This act authorized the Coast Guard to draft a regulatory scheme requiring towing vessels to become inspected vessels and obtain a Certificate of Inspection (COI). Thereafter, the Coast Guard drafted proposed Subchapter M for title 46, U.S.C., which covers Certification, Vessel Compliance, Towing Safety Management System (TSMS), Third-Party Organizations, Operations, Life-Saving, Fire Protection, Machinery and Electrical Systems and Equipment, and Construction and Management of towing vessels.
Distilling the ultimate cost of compliance isn’t easy, but English does it as well as anyone. And, while he conceded that his numbers might be a matter of some debate, he also insisted that the figures are certainly well within Subchapter M’s vast financial ballpark. For Workboat Exchange participants, the numbers gave plenty of impetus to sharpen the pencils and negotiate favorable terms for economy of scale and volume discounts. The Ritz Carlton at Amelia Island was arguably the perfect venue.

What’s Covered & When: Equipment, Regulations, and You …
The proposed new rules – already in draft form that English says will probably not change very much – cover Certification, Vessel Compliance, Towing Safety Management System (TSMS), Third-Party Organizations, Operations, Life-Saving Fire Protection Machinery and Electrical Systems, Equipment Construction, and Management.
According to English, one size will not fit all. Each entity must calculate the cost in dollars and time for any particular vessel or entity to come into compliance with Subchapter M. When will Subchapter M be implemented?
That’s anyone’s guess. For now, English insists that it is unlikely that it will be finalized any time soon. Certainly; not this year. Beyond this, English had more dire predictions. Some of the 1,059 companies and 5,208 towing vessels, he said, will probably “go the way of the dinosaur.” Some estimates, he added, have the rate of attrition – whether that entails consolidation, failure or outright exit from the industry – at as much as 20 to 33 percent. And, the cost of compliance will be passed onto the customer in either the form of higher taxes paid to the government and/or higher rates. And if this consolidation results in less hulls to get the job done, will we see delays due to a shortage of vessels?

Consequences
If enough U.S. flag operators go by the wayside, will we see foreign flagged vessels in U.S. inland waters? That’s not something too many would want to see, but if the Obama Administration has issued more Jones Act waivers in the past four years than have been granted the past six decades, then anything is possible. I’m just saying …
On the other end of the spectrum, let’s summarize what good could come out of subM: This includes the attention and remediation of a wide range of causes of towing accidents. Improved safety within the towing industry ought to be an outcome along with a significant reduction in fatalities, injuries, property damage and oil spills. English quantifies this benefit at $256.2 million over ten years. Does this include a reduction in insurance rates to reflect this new culture? I don’t know – I’ll have to ask him.

Workboat Exchange: RX for Inland Industry
The success of this year’s Workboat Exchange event reflects, at least in part, the growing need for operators and suppliers alike to begin focusing more tightly on the coming demand for revamped tonnage, closer adherence to safety and management systems and the realization that very soon, it will not be business as usual in inland waters. Along with the hard work and negotiations, however, came the opportunity to enjoy networking events, entertainment and evening cocktails with colleagues in a near perfect setting. In advance of the coming SubM storm, just what the doctor ordered. 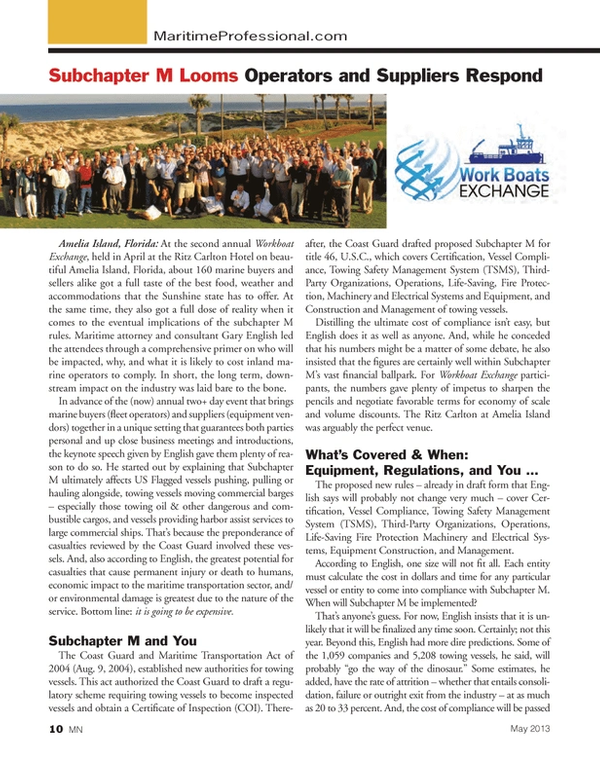