Preparation, Preservation of Resources Sets the Table for a Successful Trial Verdict

Even the safest, most careful marine operator will, at some point in time, have an accident aboard one of their vessels. And, despite the best of intentions, sometimes employees gets hurt. Once an employee is injured, the likelihood of employee filing a lawsuit because of it, especially on Jones Act tonnage, becomes a real possibility. The effective management and outcome of such a case lies in preparing for litigation. An understanding of how personal injury litigation under the Jones Act works will help you position your company for a positive outcome – or in other words, a successful trial verdict.

The Jones Act Primer
The Jones Act applies to your employees that work aboard and are permanently assigned to your vessels. Injuries to Jones Act covered employees require a different defense strategy than those with land based employees that are covered under state Workers’ Compensation insurance. Under the Jones Act, employees are able to sue their employer. Negligence or the unseaworthiness of the vessel must be proven by the employee in order to make a recovery, and damages are not statutory and are determined on a case-by-case basis. As such, preparing a good defense to the claim is of paramount importance.
On the other hand, land based employees are prohibited from suing their employer. The statutory Workers’ Compensation system determines how such a claim is evaluated and the claim is paid regardless of the fault of the employer, so a defense to negligence is not important. As negligence is important to a Jones Act claim, the company’s response to the incident and the management of the litigation are key components to effectively managing the claim and the resulting litigation. Combining this fault component with the independence, volatility and transience of many offshore employees, it is becomes very important to begin working with your potential witnesses right after the accident.

Doing your Homework
Immediately after the accident occurs is the right time to begin an active defense.  It is important to have the crew preserve the documents and equipment that will be relevant to the case. You can count on requests from your legal team for vessel logs, billing logs, time sheets, weather reports, communication logs, GPS logs, maintenance logs, and the manuals for any equipment involved with the accident. Also, if the accident damaged equipment aboard the vessel, it is a good idea to preserve the equipment for future inspection and analysis, if feasible.
You should also take statements from the crew to preserve their description of the event.  Although we recommend having statements taken by an attorney to strengthen the privileges associated with objecting to the release of the statements, many companies have the statements taken by in house claims employees or investigators.
Statements can be written by the witness or recorded. Under either scenario, take the time to interview the witness and get a firm understanding of what he or she has knowledge about, and tailor the statement accordingly. Your goal is a concise statement that clearly spells out the details of the event. If the crew is small enough, take statements from crewmembers that were not involved with the incident stating that they do not have any knowledge about what happened. It is not uncommon for a former crewmember to testify negatively about the company after they are no longer employed, despite having no firsthand involvement or knowledge about the event. An early statement proving that they do not have any knowledge, avoids such a situation.
Once statements are taken, look at the employee’s injuries and decide if a background investigation is warranted. If the employee’s behavior calls for an investigation, a civil and criminal background check can often turn up helpful information. This background check also provides information that can be used to conduct a deeper investigation. For example, ex-spouses often have information pertinent to the employee’s current physical status. Also, a co-owner of a boat with the employee may be glad to tell you what a great time that the two of them had fishing last week while battling eight foot seas.  The key is to turn each stone over – you never know what you may find.  It is also a good time to conduct a round of surveillance to see if the employee’s physical activities dovetail with his activities as reported to his treating physicians.

Response, Discovery & Motions
Once the employee files the lawsuit, the Complaint and a Summons will be served on the company’s agent of service of process as determined by the rules of civil procedure. As the deadlines for responding to the lawsuit begin running on the day that you are served, it is important to get the Complaint to your legal team right away.
Once you have been properly served, your legal team must determine the most appropriate response.  In the event that the suit was not filed timely, that they named the wrong party, or that they do not have a cause of action, the filing of a motion to dismiss the lawsuit may be appropriate. If not, an answer that denies the plaintiff’s allegations and asserts the company’s affirmative defenses must be filed prior to the deadline.
In many courts, once the answer is filed, the Court will set up a status conference to select a trial date, discuss any peculiar issues that may be important and formally start the discovery process. In the Federal Court system, one can expect a trial date to be scheduled roughly eight to ten months from the status conference. Once the stage is set, the discovery process begins. Although each case is different, parties usually follow a somewhat predictable pattern of preparing initial disclosures, exchanging written discovery, issuing record subpoenas and document requests to third parties, deposing the plaintiff and fact witnesses, exchanging expert reports, deposing experts, and then taking trial perpetuation depositions, if needed. The discovery phase of the case is where the bulk of the work is done. It is also the phase of the case that requires company resources to assist the legal team in producing the requested documentation and witnesses needed to work up your side of the case and to respond to the other side’s discovery requests. The work done during the investigative phase can save you resources during the discovery phase as most of the requested information would have already been compiled and provided to counsel.
Once the discovery phase is complete, the trial preparation phase begins. This phase includes the filing of pre-trial motions, the fine tuning of arguments and the preparation of trial witnesses and exhibits.  Often, productive settlement discussions are held during this phase once both sides have a firm grasp of the evidence that will be presented at trial. The motion process may cover a range of motions seeking the dismissal of the plaintiff’s case for procedural or substantive reasons, motions to exclude the testimony of experts or motions to exclude the presentation of certain evidence during the trial of the matter.  These motions go a long way towards setting the terms of engagement for the trial battle to follow.  Work done at this stage can streamline the trial process and keep the jury from hearing prejudicial evidence that is not admissible.

In the Courtroom
The trial, if it comes about, is actually a simple event. The parties will have sifted through the evidence and will be prepared to tell their respective stories as to why they are entitled to the relief that they seek. The parties will spend the first part of the trial questioning and selecting jurors. Once the jurors are selected, each party will be provided with an opportunity to make an opening statement.  Once the opening statements are complete, the plaintiff will put on his or her case by calling witnesses and introducing evidence. Once the plaintiff rests his case, the parties will make various oral motions related to the plaintiff’s burden of proof. Once those motions are ruled upon, the defendant puts on its case. Once the defendant rests, various oral motions are made. Then, the parties make closing arguments and the case is given to the jury for consideration. Prior to retiring to the jury room to deliberate, the jurors are read “charges” that outline the law that they are to apply during the deliberative process.
Often, after the jury begins to deliberate, both sides seem to believe that reasonable jurors have to see it their way. However, jurors, unlike the litigants, did not have the opportunity to live with the case for the duration of the litigation. They also come to the courthouse with many pre-existing opinions and life experiences that they will use to decide your case. As such, it is often difficult to pinpoint how a jury is going to evaluate your case. During post trial interviews with jurors, we are always interested to see what evidence the jury found to be important and persuasive. Often, the jurors’ analysis is totally different than those of the litigants or the judge. This perspective leads to significant uncertainty as to the potential outcome.
Once the jury has reached a decision, the jury is brought into the courtroom and the jury’s verdict is read. Once the verdict is read, the jury is released. The Judge will then prepare a judgment based upon the jury’s verdict. This written judgment is the event that begins the post-trial motion and appeal phase of the litigation. Although the trial phase is over with the issuance of a judgment, the final resolution of the claim may be far from over if the aggrieved party wants to continue on via motions filed with the trial court, with the hopes of overturning the jury verdict or taking the case to the appellate court system.

Bottom Line: Yours …
Clearly, litigation can be a significant drain on corporate resources and creates risk. Beginning the investigative/discovery process as soon as is possible, after an accident, with the presentation of your case to a court in mind, will assist your legal team in putting on a strong case with a clear message as to why the jury should decide the matter in your favor. As with any aspect of business, expending time and resources early in the process can often pay real dividends later. Although it is not possible to avoid uncertainty when litigating a Jones Act personal injury claim, proper planning can help turn the tide in your favor. 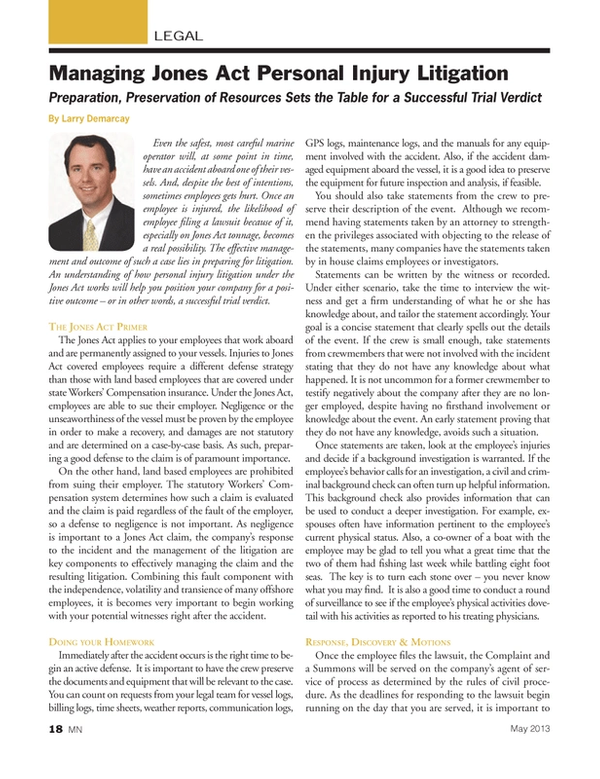