Shortsea Shipping: Poised for a Comeback

The idea that cargo, moved from deep draft ports to smaller, niche destinations, can be accomplished without trucks is something that has taken a backseat over the past five years. That’s because, absent the leadership necessary in Washington to move the viable concept forward, it has fallen off the intermodal Radar, replaced with flashy ideas for high speed commuter trains and further obscured by the pouring of billions of dollars of asphalt onto the nation’s highways. Shortsea shipping, however, is alive and well. In the Commonwealth of Virginia – and elsewhere – it is getting a jumpstart that is already yielding dividends.
Sean T. Connaughton, Secretary of Transportation for the Commonwealth of Virginia and the former U.S. Maritime Administrator, not only believes in shortsea shipping, he envisions a system that utilizes the entire intermodal chain. Overseeing seven state agencies with more than 9,700 employees and combined annual budgets of $5 billion, it would probably be easy for Connaughton to shelve a nascent shortsea program between the ports of Norfolk and Richmond, VA. After all, the trouble of setting it up and keeping it in motion probably outweighs the initial hassle of doing so, especially amidst so many other tasks on his plate. Nevertheless, he insists, “We see the immediate benefit to the economy and the creation of jobs in intermodal development.”

The I-64 Express
The 64 Express, in service since 2008, is a barge service linking the Hampton Roads Harbor and the Port of Richmond. Running from one to three sailings per week, the Virginia Port Authority hopes to ramp that up even further in the near term, when a new major customer could join the action. That could lead to as many as six sailings daily, something Connaughton describes as “a game changer.” Although this year’s results have been disappointing because one user closed a plant elsewhere, about 7,000 containers nevertheless moved across the docks at Richmond last year.
Since 2008, the service has eliminated the need for as many as 50,000 truck trips along the congested I-64 corridor. Looking ahead, Connaughton hopes that investments in the CSX railhead will make the port of Richmond more accessible, intermodal and facilitate easier interface between the various modes at the port. Today, some cargo is even going back in the other direction and about 4 percent of Norfolk containers are now being moved to the port of Richmond using the shortsea program.

The Bigger Picture
Connaughton concedes that convincing doubters is sometimes a tough sell. He explains, “Shortsea Shipping is still a bit of a ‘chicken and egg’ thing – does the need for the service, or the service itself come first? The challenge is to get the service set up first. Labor is still a work in progress and a challenge.” But Richmond is only one piece of the puzzle. That’s because the entire intermodal picture must work when it comes to the shortsea concept. At the inland port of Front Royal, VA, for example, 35,000 to 40,000 containers are being dropped by trucks annually and then moved to final destinations or the coast via train.“We need to move cargo closer to its ultimate destination before the trucks touch it,” he adds.
Integral, therefore, to the Commonwealth of Virginia’s master transportation plan are the inland ports which can be tied in more efficiently to the ports themselves. Connaughton understands the benefits of ports, and the reduction of road wear and tear that can result from a carefully coordinated transportation system. Active plans in Virginia also include Roanoke and other ‘inland’ ports for intermodal tie-ins. This cannot be done in a vacuum. Connaughton insists, “Stovepiping in government is a detriment to shortsea shipping.”

Looking Ahead: More Work to be Done
Although the Virginia shortsea route currently runs between Norfolk and Richmond only, Connaughton is looking to expand the service to Philadelphia, PA, as well. Before it can all be deemed an unqualified success, however, many other things will have to come together. For starters, the shortsea portion of the Harbor Maintenance Tax (HMT) – the ad valorum tax based on the value of the cargo and paid by the shipper – would ideally be removed. He adds, “If WRDA ultimately is passed, that has to be addressed, as well.”
Where others see only competition from the other modes of transportation, Connaughton sees opportunities to collaborate. That means upfront investments to establish services that can pay dividends on the backend. He explains, “We need to continue to push now to get new operations started so that when the economy recovers they are in a position to provide services. “From a public benefits perspective, marine highways are a cost effective alternative to expanding highway infrastructure.”

Current Events: Future Trends
As this edition went to press, S. 601, the Water Resources Development Act of 2013 (WRDA), had advanced through the Senate by a vote of 83-14. The legislation, if ultimately enacted, promises to spur vitally needed maintenance and improvements in America’s seaport related infrastructure and waterways. That’s good news for the I-64 Express – and other projects like it. Ultimately, cooperation and collaboration between states, neighboring and not, as well as metropolitan planning organizations is essential. Connaughton believes that this is where the federal government, which can see beyond jurisdictional borders, comes in.
Separately, it was also announced in May that the Maine Port Authority had selected McAllister Towing & Transportation as its partner for the design of a containerized articulated tug barge (ATB) for the New England Marine Highway Project. Prior to the award, McAllister participated in a competitive RFQ and RFP process which followed the award of $150,000 in design funding to the Maine Port Authority as part of a cooperative agreement with between the Maine Port Authority and the Maritime Administration under the auspices of the Marine Highway Program.
According to McAllister, the two partners will be spend the next few months working to design the containerized ATB based on a number of criteria such as shipper and itinerary requirements, cost, speed and capacity. The determining factor throughout this process, however, will be market demand and the requirements of the trade. John Henshaw, Executive Director of the Port Authority said, “We have been working with Maine shippers on this project for three years and we have more work to do. It takes time to integrate with a shipper’s supply chain and to create value utilizing any mode of transportation. The containerized ATB adds another opportunity for more competitive supply chain optimization.” The initial design phase is expected to complete over the summer months and will culminate with the submission of a design to MARAD in September of 2013.
Shortsea Shipping is alive and well, after all: in Norfolk and Richmond, VA and coming soon hopefully to Maine and Philadelphia, too. The looming passage of WRDA could help to spur much of that on, but if not, then the collective vision of Sean Connaughton, McAllister Towing & Transportation and the Maine Port Authority might just be enough to keep it on track. Let’s hope so. 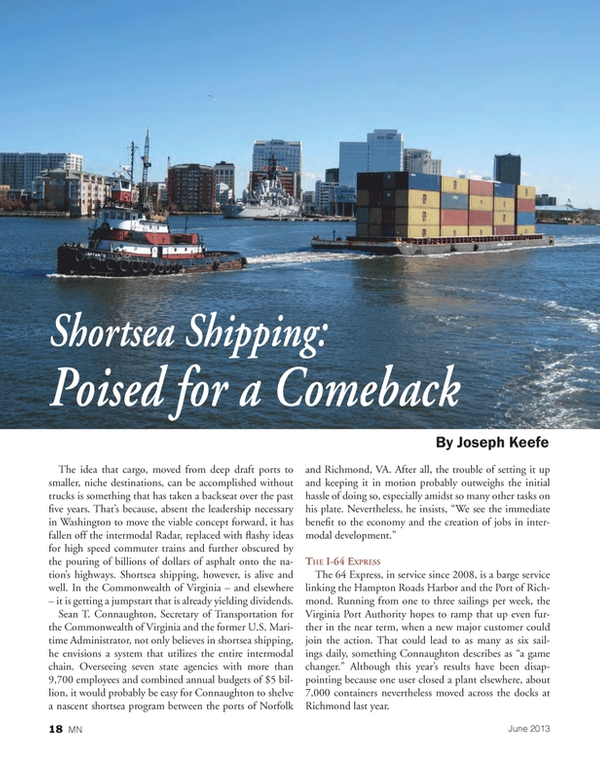