Wilson Electronics, a U.S.-based manufacturer of cellular signal boosters, is targeting inland and coastal waterway users with a new marine initiative. The development of a signal booster kit that improves cellular coverage for boaters on inland waterways and for near-shore mariners means that dropped connections and no-service zones may be a thing of the past. Cellular booster systems take a weak signal – sometimes too faint for a cellular device to detect – and boost it so that strong, reliable signal coverage is available inside a vehicle, home, office, commercial building, warehouse or other structure.
The Marine Signal Booster Kit (SKU# 841246) pairs Wilson’s well established AG SOHO 60 signal booster with the its marine antenna, and includes all cables and components needed to complete and install the system. FCC approved for use in February, the Wilson product had, until now, been targeted mostly for home and auto. Selling robustly into consumer markets – with as many as 35,000 units being moved monthly – Wilson now looks to the largely untapped marine markets.
“Mariners who try to use a cellular device while on the water experience dropped connections and no-service zones just as cellular customers occasionally do on dry land,” said Laine Matthews, business development director for Wilson Electronics. “Installing a Wilson mobile signal booster provides boaters the same signal boosting benefits that drivers of cars, trucks and RVs have enjoyed for years.” For Workboat mariners who need reliable communications for voice, data transfer and other tasks, the signal booster may be just the ticket – especially for those who cannot afford SATCOM prices in areas where cellular coverage is less than perfect.
Wilson claims that their signal boosters, in some cases, are capable of delivering faster data downloads – up to 20 times faster in some 4G service areas. And, most signal boosters are manufactured to be carrier and device agnostic – they work no matter which operating system and provider network a device employs. For the operator running management software or those considering SMS SubM software purchases, the improvements could make all the difference.
Wilson signal boosters have proven their value for sporting craft, houseboats and even ocean-going vessels. When Hurricane Irene battered the Caribbean and U.S. East Coast in 2011, one vessel equipped with a Wilson cellular signal booster sought refuge off Compass Cay in the Bahamas. The crewmembers were the only mariners in the area able to maintain cell phone contact as the eye of the hurricane passed just 12 miles east of their position. The cell signal they picked up originated from another island, and was too weak to allow voice calls. Using the Wilson signal booster, the crew was able to send and receive text messages even as the hurricane raged. Crew members were able to get weather updates from Florida by text, which they then relayed, via two-way radio, to other ships in the area.
Wilson Electronics, Inc. has been involved in the wireless communications industry for more than 40 years, producing a wide range of components that significantly improve cellular communication (10db improvement or about 10 miles on average) in mobile, indoor, marine and machine-to-machine (M2M) applications. All Wilson products are engineered, assembled and tested at the company’s U.S.-based headquarters. Wilson boosters fully comply with FCC regulations for cellular devices and are FCC type accepted and Industry Canada certificated. All Wilson Electronics boosters employ techniques that prevent the possibility of interference with any nearby cell tower. 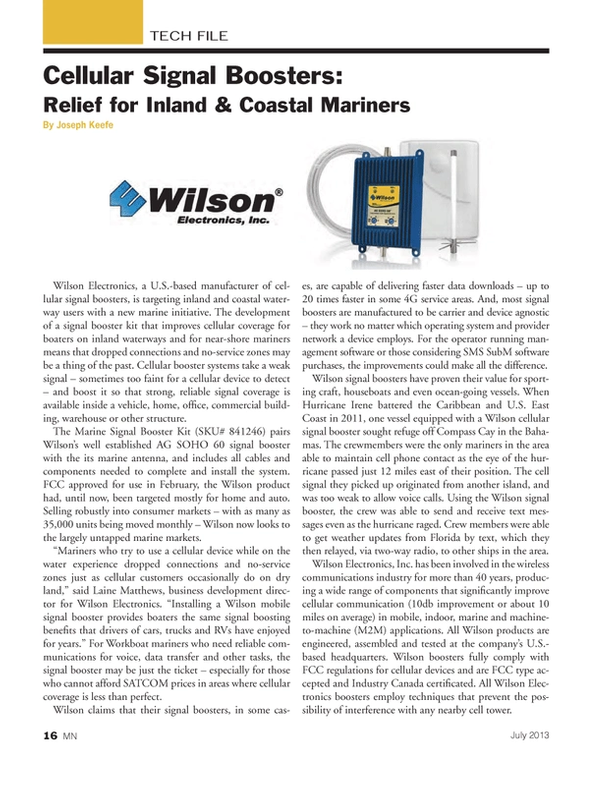