The imperative for a holistic United States maritime strategy has never been greater. This is not news to many of you, but the call must be raised more persistently, more vocally and by many more of us, in order to drive action beyond rhetoric.
The National Strategy for the Marine Transportation System was published in July 2008 by the previous administration. We are now in the second iteration of leadership changes at the Department of Transportation and Maritime Administration since the strategy was issued. The White House, the Congress, and the maritime industry should collectively and collaboratively address the evermore pressing need for a national maritime strategy and pass long-overdue legislation to re-invigorate the maritime industry – an essential component of a strong national economy and a vital pillar of national security. Key areas include domestic and international commerce, maritime security, marine environmental policy, workforce development, maritime education and training funding, and strengthening our American merchant marine.
All of these intersect with actions which must also be taken to ensure the strength of our entire transportation industry across intermodal networks, so that we generate the right capability through the right sort of balanced long-term investment in infrastructure, technology, the environment, education and the like. With planned and focused effort, we will generate capability and while doing so, promote short and long term employment opportunities across various industries, benefiting the economic vitality of the nation and extending  positive second and third order effects, including increased tax revenues.
The time is now for the White House and Congress to work together on a bipartisan effort. Working closely with DOT and MARAD, a high level working group should be convened from the broad cross section of individuals such as key members of Congress, leaders from the U.S. maritime industry, labor, DOD, DHS, as well other industry experts and educators to develop maritime strategy, policy with executable action plans, and legislation. The Committee on the Marine Transportation System should be widened to include stakeholders from outside of the government and so serve as a central board for the long-term development and oversight of a full scale effort.
The American maritime industry stands at a crucial intersection. Investments must be made to provide opportunities for our maritime industries and ensure that our ports, waterways and recreational centers are modernized, efficient, environmentally conscious, and secure and remain attractive for business.  Since 1981 the MARAD budget has dwindled from $568 million (which constituted 2.39 percent of the DOT budget) to $346 million backing up only 0.47 percent of the DOT budget).
The Jones Act must also be shored up to properly support the many facets of our domestic maritime industry – all essential components of national security and capability.  Statistics support the need for ensuring that the Jones Act remains viable:

Our hope for the future lies in ensuring that the White House will, with the support of the new team at DOT and MARAD, immediately work for creation and implementation of this historic maritime planning team. We have strong supporters in Congress with Subcommittee Chairman Duncan Hunter Jr. and Rep. John Garamendi who have voiced support for the Jones Act as an integral part of our national defense strategy and the maritime industry as a whole. Others such as Congressmen Dan Young, Nick Rahall, Elijah Cummings, and Scot Rigell have been staunch advocates of reversing cuts as a result of changes to U.S. Cargo preference statutes.
It is up to us to encourage Congress to support and work ever more closely with leaders of the American maritime industry to create “THE” comprehensive maritime strategy and pass legislation that will not only support, but also spur further growth in our industry.  History has shown us what can happen when stakeholders come together, roll up their sleeves and work toward feasible solutions.  Since the Maritime Security Program fleet was established by the Maritime Security Act of 1996, the fleet has expanded to include 60 U.S. flagged, privately owned, militarily useful vessels.
The American maritime industry is much too valuable to be allowed to be any less than the world’s leader. The time to act is now. I encourage the leadership of the U.S. maritime industry, Congress and the White House, as well as other stakeholders and my fellow educators, to create a comprehensive and long-lasting maritime policy and legislation focused on promoting economic growth by encouraging domestic ship building, providing opportunity for international and domestic commerce, securing our ports, and working to ensure that we are training and educating tomorrow’s maritime industry leaders. 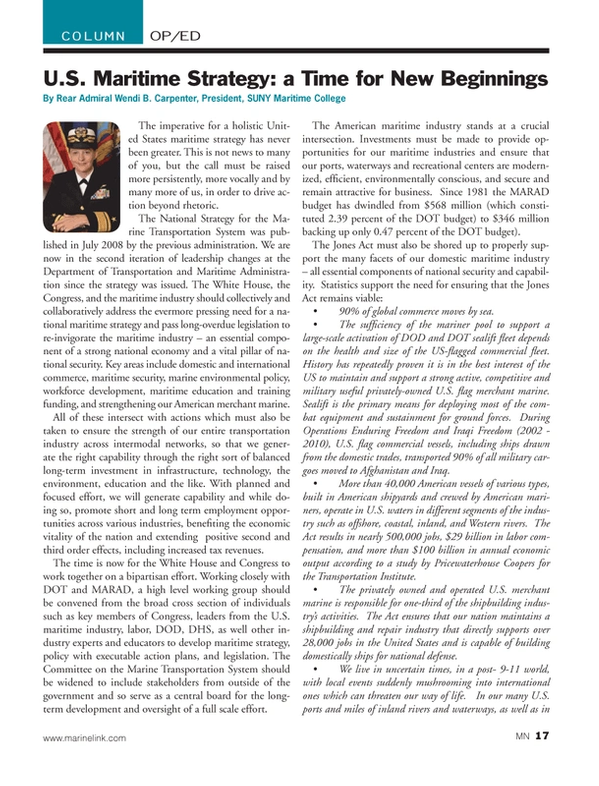