A raft of new and innovative concepts for LNG barge missions hits the market, in North America and across the pond, as well. Industry gears up for the soon-to-come need for bunkering, infrastructure and LNG-related logistics.

In 2014, innovation – as it turns out – means new ideas for the (previously) boring subject of marine barges. It also means LNG. Paired together, LNG and barges are giving naval architects, global classification societies and the operators of a new generation of LNG-powered tonnage something to think about. That’s because the final link of the push to move to dual fuel and/or LNG-powered commercial vessels involves infrastructure. Some early stakeholders are ramping up shore infrastructure to meet the coming demand for bunkers. Others are planning – and  building – barges to accomplish the task. And, since it never really has been done before, the design task faces many challenges.
Spending time and money on a design that no one, to date, has agreed to pay for, represents a real leap for some smaller naval architecture and design shops. The idea of an LNG bunker barge also entails a new area for classification societies, the IMO and of course, the U.S. Coast Guard. And yet, spec designs are emerging and their creators, looking for customers. Most that already have customers aren’t yet willing to talk about it, but that doesn’t prevent the ideas from making a splash in the trade news. Beyond this, the differences between the various designs and the driving forces behind each make for interesting discussion. This month, we look at a few of these entries to the hottest thing to hit shipping since Noah crewed up for his inaugural voyage.

BHGI, Conrad Team up on LNG Barge Concept
In late August, Conrad Shipyard, L.L.C. engaged Bristol Harbor Group, Inc. (BHGI) to develop a 3,000 cubic meter Liquefied Natural Gas (LNG) transport barge utilizing a Bristol Harbor Group proven hull design built by Conrad. It was also announced that BHGI had been awarded an “Approval in Principle” (AIP) by the American Bureau of Shipping (ABS) for the design of the 3,000 cubic meter Liquefied Natural Gas (LNG) Transport Barge design on behalf of Conrad.
The deal looks to be a natural fit for natural gas. That’s because BHGI has a long relationship with Conrad that, in the past, had focused on coastal liquid cargo barges. In this case, the 300’ version of those proven double hull oil barges that came to be the basis for the LNG Transport Barge. According to BHGI, the new design will serve the purpose of primarily transporting LNG in blue water along the United States coastline. Storage containment will consist of four Type C pressure tanks, all equally sized at 750 cubic meters. The tank design offers suitable hold times for cargo transport without the need for reliquefaction. The design is focused on constructability and ensuring cargo safety.
Separately, BHGI has also been active in a number of marine related natural gas projects for a variety of clients. Recently, BHGI has been awarded a contract to perform design conversion work for the United States Army Corps of Engineers on one of their vessels from diesel to dual fuel.

Bureau Veritas to Class first LNG bunker barge
International classification society Bureau Veritas (BV) has been chosen to class a unique LNG bunkering vessel which will be built in Korea. The vessel will carry 5,000 cubic meters of LNG for ships’ fuel stored at 4 Bar in two IMO Type C pressure tanks. Delivery is set for 2016. The LNG bunker barge will be 111m LOA, beam 16.8m, draft 4.9m and will have dual-fuel diesel electric propulsion with twin azipods for high maneuverability. According to BV, It will be built and equipped to the highest environmental friendliness standards.

Jensen’s LNG Play
At the Passenger Vessel Association (PVA) annual meeting held in Houston, Texas, Jensen Maritime Consultants had on display just a couple of their many design efforts underway at the Crowley-owned design and engineering shop. Naturally, those designs had the use or carriage of LNG as their central theme. LNG, at least on this side of the pond, is still largely uncharted waters, but that’s hardly the case for Jensen. Their new LNG bunker barge design, for example, is ample testimony to that.
Ongoing in-house projects include an LNG bunker barge, the LNG-powered tug, LNG powered ATB designs and of course, the design work with the larger, faster and environmentally-friendly liquefied natural gas (LNG)-powered, combination container – Roll-On/Roll-Off (ConRo) ships. Already in the thick of LNG, Jensen will provide construction management and supervision in the shipyard throughout the building phase of the ConRo’s.
Jensen’s bunker barge designs are a closely guarded secret, but Jensen will focus on two basic sizes – ranging from capacities of 2000 to 3000 cubic meters. According to Jensen, a bunker barge has to be large enough to where it makes sense, but also small enough that it is affordable and economical.
Jensen’s philosophy for LNG is simple. Summing it all up, Jensen Maritime Vice President Johan Sperling told MarineNews earlier this year, “The Rule of thumb today: LNG equipment is about double the price of non-LNG components. We’re talking about the equipment. Whoever moves first takes the most risk because they are going to spend a lot of money and then the prices are going to drop. You don’t want to be first and get it wrong.”
Jensen went forward with its LNG pioneering efforts for several reasons. Sperling says, “It was a big risk – for a naval architect, time is money and we spent a lot of R&D time on this. In this case, we felt the risk was low enough because we think it’s real enough that someone will eventually pay for it and that’s exactly what has happened.” Indeed, LNG ships being built, and when they are delivered, something will need to be in the water to serve them.

Becker Marine Systems: LNG Hybrid Technology for Barges
Environmentally-friendly innovations are the future of shipping. Nowhere is that more apparent than with Becker Marine Systems’ new LNG Hybrid Barge, that acts like a floating power plant, supplying low-emission energy to cruise ships. It’s also a new twist on the practice of “cold ironing” in port. Ports considering the installation of fixed ship-to-shore power connections will no doubt be taking a hard look at a concept that allows for a portable solution.
According to Becker, the LNG Hybrid Barge is being eagerly awaited at the Port of Hamburg. Launched in early September, the barge is expected in Hamburg in mid-October. With a length of 76.7m, a breadth of 11.4 m and draught of approx. 1.7 m, the vessel will eventually, for the first time, deliver energy to a cruise ship as part of a joint project with AIDA Cruises. Delivered only two years after the start of the project, the LNG Hybrid Barge is equipped with five generators with an overall output of 7.5 MW (50/60 Hz). These generators will be the first marine classified LNG Caterpillar engines to be delivered to customers. www.LNG-Hybrid.com.

LNG & Barges: here to stay
No matter what a particular LNG/barge concept is dreamed up for, the advantage of a mobile source of bunkers and power has to be an attractive lure for both marine operators and ports clamoring for cleaner air. In North America alone, at least eight LNG and/or dual fuel vessels are either on the drawing boards, under construction or, as in the case of Harvey Gulf’s industry-leading entries on the Gulf Coast, already in the water. That means a ready and regular, dependable supply of LNG has to be made available. In the absence of shore-based bunker facilities, barges will be among the early solutions sought by stakeholders.
While barges as LNG bunker vehicles may be the most obvious application, it is also true that unique entries such as Becker Marine’s mobile power source for in port “plug-ins” will find utility in other markets. As LNG moves forward on the waterfront, however, the one certainty all can count on is that barges will be part of the solution. Fortunately, there is no shortage of innovative ideas to make this happen.


(As published in the October 2014 edition of Marine News - http://magazines.marinelink.com/Magazines/MaritimeNews) 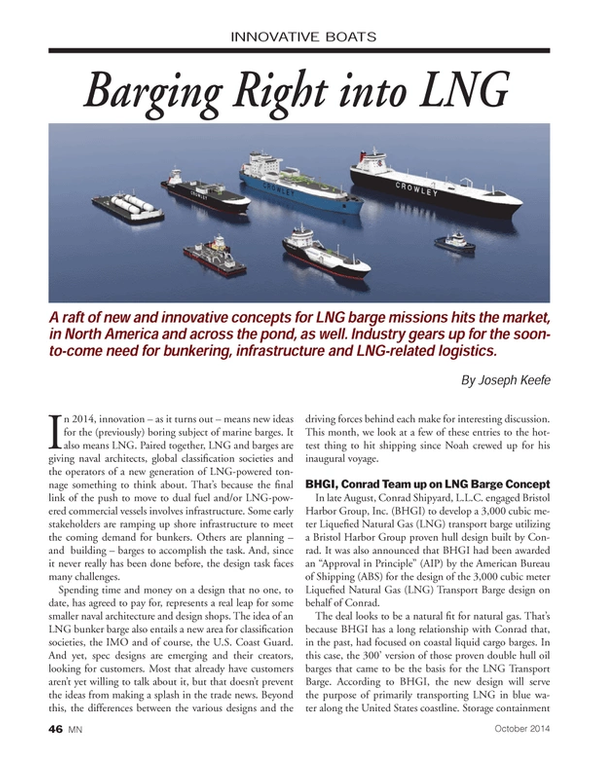