The Gulf Intracoastal Waterway – A Silent Giant No More

The recent enactment of the Waterways Resources Reform and Development Act of 2014 (WRRDA) has brought a sense of optimism to inland waterways mariners, operators and industries across the nation.

Our inland waterways are poised for success, and key to that success is the anticipated support provided in that bill. Of course, follow on appropriations and carefully planned implementation is critical to assure continued success of our waterways system. One segment of that system, the Gulf Intracoastal Waterway (GIWW) is growing in importance and value to the nation. It stands ready to shoulder its share of commodity traffic, but like the rest of our inland system, it also needs resource attention.

Once referred to as the “Silent Giant,” the GIWW stretches 1,300 miles from Brownsville, TX to St. Marks, FL and carries over 115 million tons of commodities in a typical year. Initially built to provide a safe, land-locked route from Texas to Florida, it has evolved through the decades into an essential route that links Gulf of Mexico ports to each other; to refineries and plants; and to the heartland of the nation via the Mississippi River and other tributaries. In recent years, the GIWW ranked third among the major inland routes in terms of tonnage carried (Mississippi River and Ohio River were one and two). However, the monetary and strategic value of the waterway is quickly growing as a result of the United States’ energy renaissance.

Consider that over 100 billion dollars is being invested in energy related projects and infrastructure in southeast Louisiana and Texas. These projects will rely on the safe, economical, efficient, and environmentally friendly mode of barge transport to move crudes, feed stocks and products along the coast and up and down the river systems. Clearly, this means more towboats, barges, facilities and support industries will use the GIWW. Reliable infrastructure is important to the waterway’s continued success – and that’s why WRRDA and other initiatives are important to the users of the GIWW. Authorization and funding for recapitalization of old lock and flood control structures is needed.

For instance, the Inner Harbor Navigation Canal (IHNC) Lock in New Orleans sits astride the mid-point of the canal, bisecting its east and west reaches. Built in 1921, it was on track for replacement as a deep draft lock. However, with the closure of the Mississippi River Gulf Outlet Canal following Hurricane Katrina, the deep draft portion was no longer feasible and the non-federal sponsor withdrew its support. Now, the United States Army Corps of Engineers (USACE) is starting a General Reevaluation Report to determine the next steps for replacing the lock with a modern shallow draft version. This is a significant project, affecting east-west traffic, as there is no alternate inland route should the aging lock fail.

To the west, the lock at Bayou Sorrel on the Port Allen Alternate Route helps move traffic from Morgan City, LA up the Atchafalaya River to the Mississippi River and northward. A recent reevaluation of the project to replace this lock with a modern, larger design determined that due to construction cost increases, a positive benefit cost ratio no longer existed, preventing project authorization and funding from moving forward. Industry and Inland Waterways Users Board representatives have asked the USACE to reexamine the issue in light of the significant investment in energy facilities and waterways growth we expect to see.

In Texas, the Brazos River Floodgates near Freeport are simply outdated and not up to the task of safely and efficiently passing the unprecedented, record volume of tank barge traffic originating in Victoria, TX and moving east. Recognizing that to take full advantage of the GIWW’s capacity, the gates should be either replaced or removed, the waterway’s non-federal sponsor, the Texas Department of Transportation, has undertaken an effort to accelerate and fund the first step in the process – a USACE feasibility study. These three long term infrastructure replacement projects, all important to future GIWW viability, have strong industry and non-federal sponsor advocacy, both vital to success. WRRDA’s reform of the Inland Waterways Trust Fund and Capital Development Planning are the bookends to this kind of advocacy and can help ensure infrastructure recapitalization.

Equally important, USACE needs a properly funded Operations and Maintenance (O&M) budget for the GIWW. Keeping up with dredging, mooring buoy replacement and maintenance, and lock and floodgate repairs are becoming more and more difficult as increasing traffic wears on the waterway and infrastructure, federal budgets stagnate and maintenance is deferred. WRRDA requires the Corps to assess the O&M costs of both the Atlantic and the Gulf Intracoastal waterways with an emphasis on identifying costs to achieve authorized length, width, and on identifying the unmet O&M needs of the waterways. This assessment, and the funding that will hopefully follow in the President’s budget, are essential steps to ensuring tows and barges have safe moorings and lock delays and groundings are kept to a minimum.

In a study, currently undergoing peer review, industry output losses and impacts due to unplanned, extended waterway closures were examined. Closures may occur for any number of reasons, but primarily failed or damaged infrastructure is usually the culprit. In relative, annualized terms, estimated losses associated with a GIWW waterway closure are far greater than those associated with the Mississippi or Ohio River systems. This is most certainly due to the high value of GIWW cargoes – predominately crude oils, petroleum products and chemicals – and the increasing volumes we’re seeing on the waterway. This tells us the “Silent Giant” is making some noise and verifies that the GIWW’s importance and value to the nation is growing. Continued strong industry and stakeholder advocacy, WRRDA implementation and adequate appropriations are the keys to ensuring that the noise on the GIWW continues via this essential, safe and prosperous route for inland commerce.

Jim Stark is the Executive Director Gulf Intracoastal Canal Association. GICA’s mission is to ensure the Gulf Intracoastal Waterway is maintained, operated and improved to provide safe, efficient, economical and environmentally-sound water transportation across Gulf coast states. Stark has earned an M.B.A. from the College of William and Mary and a Bachelor of Science degree in Ocean Science from the United States Coast Guard Academy. 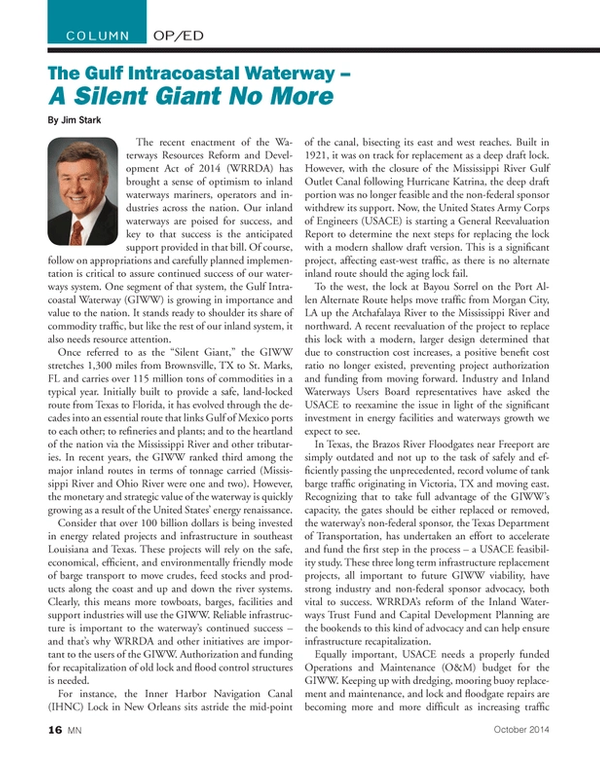 Read The Gulf Intracoastal Waterway – A Silent Giant No More in Pdf, Flash or Html5 edition of October 2014 Marine News