We recently came across a very interesting report issued to Congress by the United States Coast Guard. The May 2012 study might seem dated, but that’s hardly the case. Actually, it’s a telling description of what can go wrong, why and perhaps, a blueprint for how to go forward and fix things.

That’s our take, in any event. The Report chronicles oil spills from all vessel types, including the towing industry, tank ships, the offshore industry, freighters, and fishing vessels. Section 703 of the Coast Guard Authorization Act of 2010 directs the Coast Guard to conduct a study of oil spills involving commercial vessel sources, covering 2001–2010.

The data for this report was derived from incident investigations in the Coast Guard’s Marine Information for Safety and Law Enforcement (MISLE) information system.
The Coast Guard Report included consultation with and input from Maritime Industry Experts such as the American Waterways Operators (AWO), the Great Lakes Pilots Advisory Committee, Intertanko, the Maritime Administration (MARAD), Offshore Marine Service Association (OMSA), the Passenger Vessel Association (PVA), the Ship Operations Cooperative Program (SOCP); and the Towing Safety Advisory Committee (TSAC). And, in the end, they examined spill causes by accident, type of vessel, service, size of vessel and myriad other variables. It’s really a good primer.

The 74-page report includes analysis of oil spills and their causes, and an assessment of near-miss casualties, based upon comparisons of all reported marine casualties to those resulting in a spill. It is fascinating stuff and in truth, better than a night of “must-see” TV. We include just a few of the Tables and Figures that accompanied the report within our pages.

The data also shows that a small number of vessel casualties resulted in most of the spill volumes. Most spills do not involve vessel casualties – these non-casualty spills are termed “operational” spills and these incidents are reportable under the Federal Water Pollution Control Act of 1973. The casualty and non-casualty groupings were studied separately in order to identify their respective causal factors. For purposes of this report, a non-casualty spill is one in which the only reported occurrence is an oil spill (the incident did not involve an allision, collision). Interestingly, material failure was the most frequently reported casualty reason, involving about 50 percent of all incidents. Material failure is a mechanical failure of a shipboard system (i.e., systems involving steering, propulsion, navigation, pollution prevention, fuel transfer, cargo transfer, cranes), which when functioning properly, acts as a defense against a casualty or pollution incident from occurring.

Inattention and procedural errors were the most frequently reported human factors. Predictably, other human factors included drug or alcohol use; fatigue; and violation of law or regulation. These types of occurrences were reported most often among crew members of fishing vessels and towing vessels who may not be required to have a license or other mariner credential. More so, fishing vessels had more reports of drug or alcohol use and fatigue than all of the other vessel types combined. But, this shouldn’t surprise anyone, especially since the Coast Guard’s Walter J. Brudzinski, Chief Administrative Law Judge did a study on this very trend, not too long ago. As we reported in these very pages just one year ago, it turns out that U.S. Documented small passenger vessels (SPV) and their crewmembers are among the most heavily regulated of all U.S. documented categories. Conversely, U.S. Documented commercial fishing vessels (CFVs) are subject to the least amount of Coast Guard regulation. CFV’s are, however, subject to Post-Accident drug and alcohol testing – presenting a perfect contrast to SPV crewmembers for comparison. In this report, the Coast Guard recommends that “dockside examinations of commercial fishing vessels should be used to educate vessel owners on the importance of vessel maintenance and watertight integrity. On the other hand, we think that the Coast Guard ought to start random drug and alcohol testing on this segment, as well. Two studies – both emanating from Coast Guard sources – say so. What are they waiting for?

The Coast Guard also recommends that given the success within the oil shipping industry to reduce their level of oil spills and pollution, then it stands to reason that that the Safety Management System (SMS) provisions of the recently published proposed rule for inspection of towing vessels should emphasize SMS implementation to the fullest extent possible. Of course, here, they are talking about the Subchapter M towboat rules. Again, this sounds like a great idea. And, industry, for once, is dying to have the subchapter M rules ratified. We ask again: what are we waiting for?

Inattention to detail, (lack of) worker qualifications, external causes (warning buoys off station), inadequate training, mistiming during vessel maneuvers, incorrect situational assessment – you name it – they examined it. In fact, in the 10-year period in question, most spill volumes can be attributed to five groups or types of vessels: vessels engaged in offshore oil production; towing industry vessels (tank barges and towboats); tank ships; freight ships; and fishing vessels. We won’t steal the Coast Guard’s thunder, though. 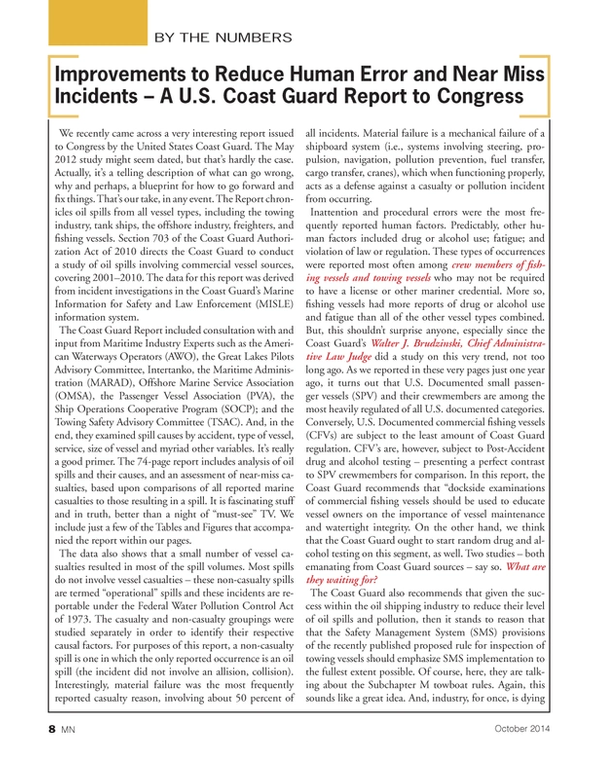