The BoomVane is one of the most useful and interesting tools available to oil spill responders for shoreline and single vessel boom deployment. Maintaining an effective oil containment boom configuration with two vessels is difficult to coordinate. The Elastec BoomVane solves that problem. BoomVane can also tow heavier booms greater distances than an outrigger arm resulting in wider sweep swaths.

Illinois-based Elastec is the manufacturer and owner of the proprietary BoomVane technology. Elastec offers four BoomVane sizes to accommodate various water depths. They are manufactured in the Company’s ISO 9001:2008 facility in Carmi, Illinois, along with a complete line of oil skimmers, work boats, containment boom, fire boom, vacuum systems, portable incinerators and other environmental equipment. These include:
Powerful Performance
An evaluation of the BoomVane and a similar device in the late 1990s took place on the Illinois River near St. Louis, Missouri. The BoomVane was the clear winner at pulling and holding a boom from the shore into the current. It was so powerful, the mooring line pulled a 3-foot diameter boulder into the river. Even a pickup truck has been pulled into the water by the powerful BoomVane. Finding an appropriate mooring base is imperative as the towing force is even more powerful in strong currents.
When using the BoomVane from the shore, the deflection mode is relatively easy to deploy. The force of a 2 knot current on 200 ft of boom with a 12-inch skirt is approximately 4,400 pounds — 2 tons of water. The BoomVane and its boom system have a geometry that share the load of the boom with the mooring line, but there are still high forces that can place over 2,000 pounds on the mooring line. The mooring line and hardware that is included in the BoomVane is rated well above these forces and should not be replaced by anything inferior.
As with any oil spill equipment, to operate the BoomVane successfully and safely, training and practice are vital. Although simple in design and operation, safe deployment of the BoomVane requires training and adherence to the guidelines along with an abundance of common sense and practice. The Elastec BoomVane manual appendix contains diagrams, safety information and data tables for proper distances, lengths and forces. The maximum current speed should also be determined to ensure the mooring point is strong enough. An alternative to fixed anchor points may be stakes in plates or Elastec’s Terra Twist anchoring system.
With the proper training, the Elastec BoomVane simplifies the challenges of booming, especially in a fast river. The critical factors for successful BoomVane deployment are having the equipment in good, ready condition, personnel trained to assemble and deploy, identification of strong mooring points, and practice, practice, practice.
(As published in the October 2016 edition of Marine News) 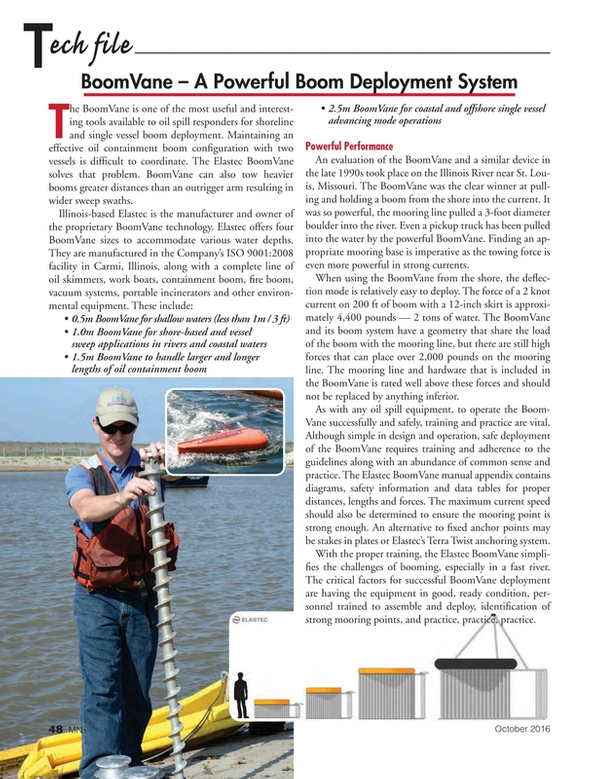