Sailing into the Arctic’s Future

Last month, a large cruise ship completed its inaugural cruise through the Northwest Passage. The historic journey brought nearly 1,700 passengers from Seward, Alaska, past the rugged wilderness and isolated villages of the Arctic, to the concrete jungle of New York City. Along the way, passengers and crew were treated to a stunning contrast of climates, geography and culture.

While understandable, concerns over passenger safety, wildlife disruptions and water pollution went unrealized during the historic cruise through the passage. A centuries-old navigational barrier has been successfully breached, presenting both challenges and opportunities for the natives of the Arctic. For them, the world has indeed become smaller, as receding ice now allows more face to face contact with outsiders from around the world. The challenge now is that these new opportunities are on terms determined by the Arctic natives, and that change in culture and technology come as a result of invitation rather than domination.
The same holds true for the energy industry, particularly offshore oil and natural gas. The Arctic has long held the potential for abundant energy development, which is supported by most Alaskan natives. However, like much of the Arctic, the Alaska OCS remains largely unexplored. Economic conditions and politics have literally put oil and natural gas exploration in the US Arctic on ice. As demonstrated by the recent cruise through the Northwest Passage, thawing ice is allowing for a new source of economic and social development through the tourism industry. Likewise, the economics of the energy industry are expected to improve, providing incentive for oil and natural gas explorers to prove the energy potential of the Arctic.
The question facing the energy industry is whether U.S. politics will allow for an energy thaw. It is important to point out that Arctic oil and natural gas exploration is not a nascent industry. In the Alaska Arctic, onshore development has occurred for decades, supplying a safe and consistent source of home-grown oil to consumers in the lower 48 states via the Trans-Alaska pipeline. Canada and Norway have been receiving oil and natural gas from offshore projects operating in the far north, and Russia has upped longstanding activity above the Arctic Circle by recently opening the Arctic gate marine terminal linking Russia’s Arctic-sourced crude oil to European and Asian markets.
There is no reason why similar progress isn’t possible within the U.S. Arctic. Energy demand will only increase in the coming decades, and by 2040 fossil fuels will still supply around 80 percent of our energy needs. An estimated 26 billion barrels of oil and 131 trillion cubic feet of natural gas lay offshore Alaska and could help meet this energy demand. Dozens of wells were safely drilled in the Beaufort and Chukchi Seas in the 1980s and 1990s using technology generations behind the modern technology used to safely drill a new well in the Chukchi Sea during the summer of 2015. Even though the hoped-for deposits were not discovered at that well, it is too early to rule out significant finds elsewhere in the area.
While the current low commodity price environment has indeed made things more challenging for an industry that is experiencing very tough economic times, what we do know is that offshore oil and gas developers take a long-term view and will often finance projects in the short-term knowing that projects planned today take many years to develop. While global energy market economics remain a challenge, U.S. policymakers can certainly take concrete steps to improve the regulatory environment and address the myriad, sometimes unnecessary, challenges to bringing home-grown Arctic energy to market.
One of the first steps in providing that environment is to guarantee lease sales in the Alaska Arctic, which will be no small feat. The Obama administration is finalizing the 2017 – 2022 offshore leasing plan and anti-fossil fuel activists, fresh off their success in the Atlantic, have made removing the proposed Beaufort and Chukchi lease sales a top priority. It is vital for our nation’s economic and energy security that the opportunity for sales in the Beaufort and Chukchi remain in the plan, and are without arbitrary and politically-expedient restrictions that render the sales meaningless.
The Arctic regulations promulgated by the U.S. government earlier this year largely serve to further restrict offshore exploration in the region. The regulations do not accurately reflect current industry practices or the ability to cap a well and capture oil and gas in the unlikely event of release during drilling. In fact, the regulations increase the cost of projects without increasing safety. Therefore oil prices have to be significantly better than they are today for companies to seriously plan for additional exploration activities in the Alaskan Arctic.
The current administration has also refused to endorse a revenue sharing plan for Alaska. The Gulf of Mexico states that participate in offshore oil and gas development (the only other place in the U.S. currently open for offshore leasing) have a revenue sharing program allowing both the Federal and state governments to receive royalties, bonus bids and rents paid by the oil and natural gas industry.  The revenue is an added bonus to the increased economic growth that is a by-product of the oil and natural gas industry. For areas like Alaska’s North Slope, where 99 % of the North Slope Borough’s budget depends on oil and gas taxes, this would be a tremendous boost to help support local infrastructure, schools, community centers, and other basic services.
As the Arctic stands poised on the threshold of a new economic era, oil and natural gas exploration and development in the region requires joint cooperation between native communities, the state of Alaska, the federal government and industry. Bringing all these stakeholders together will not only ensure that there is safe development of our resources, but will ensure that local communities are not left behind in the new wave of Arctic policies from Washington, D.C.
The Author
Randall Luthi is President of the National Ocean Industries Association (NOIA).
(As published in the October 2016 edition of Marine News) 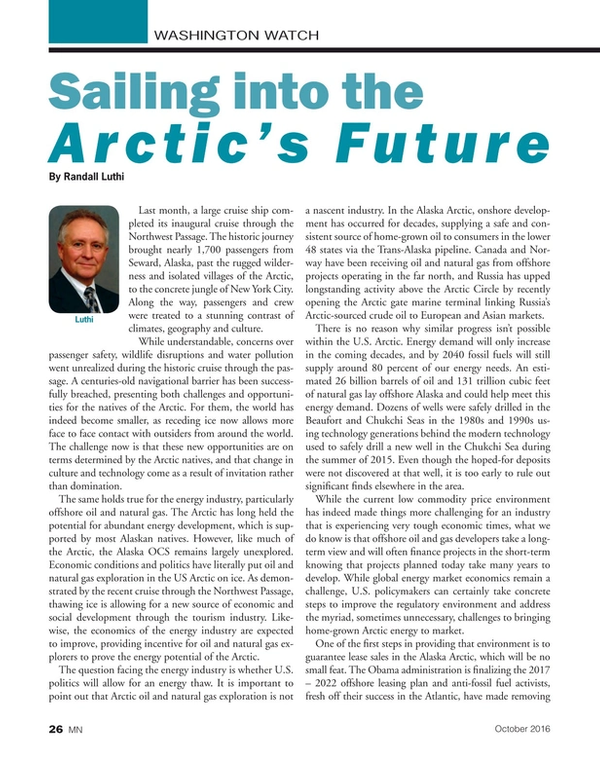 Read Sailing into the Arctic’s Future in Pdf, Flash or Html5 edition of October 2016 Marine News