Margo S. Marks is President/General Manager of Beaver Island Boat Company, Beaver Island, Mich. The company has provided passenger, vehicle and freight services, between Beaver Island and Charlevoix, Mich. since 1984. The first ferry service to the island began in 1890. B.I. Boat Company operates two subchapter K vessels with a capacity of up to 294 passengers and 16 vehicles on the larger vessel, and 172 passengers and 9 vehicles on the smaller vessel. Notably, Margo has deep roots in the Gresat Lakes community and graduated from the Great Lakes Maritime Academy in 1983, She holds a First Class Pilot (Great Lakes) and Mates Great Lakes/Inland Water license of any gross tons and a 100 ton Masters license. Beyond this, she also graduated from Ferris State University where she earned her BA in Business Administration in 1984. Margo has been with Beaver Island Boat Company since 2001 and currently serves as PVA’s President, having previously served for 6 years on the board of directors. She is the former Chairman of the PVA Regulatory Committee and participates in the Quality Partnership meetings with the U.S. Coast Guard. A strong industry leader and a recognized stakeholder in many aspects of advocacy and outreach, she also serves on the U.S. Coast Guard’s Western Michigan Area Maritime Security Committee, the safety committee for the Inland Seas Education Association, and is a member of the Great Lakes Captains Association and the International Shipmasters Association Lodge 23. To say that she has her finger on what is important to ferry operators on the Great Lakes – and everywhere else – would not be overstating the case. Listen this month as she weighs in on the important issues and challenges facing North America’s passenger vessel and ferry industries. 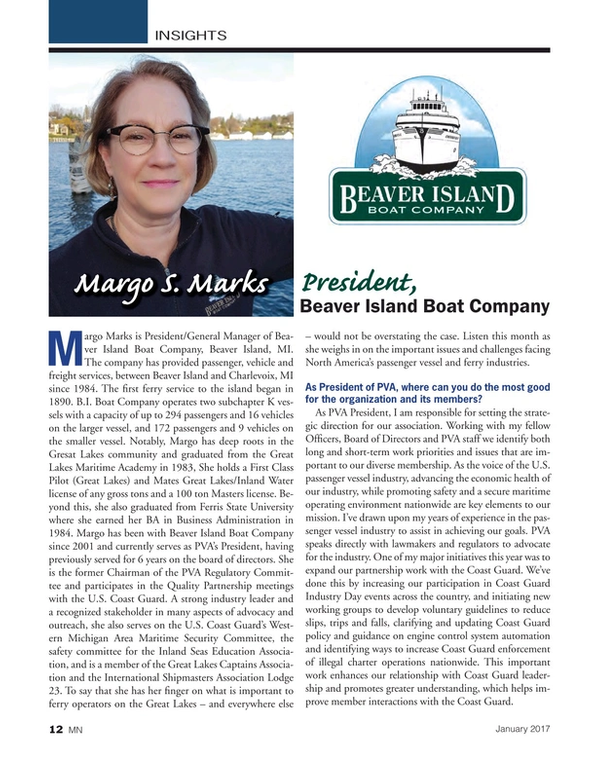