Bob Kunkel needs no introduction to Marine News readers. Kunkel, President of Alternative Marine Technologies, previously served as the Federal Chairman of the Short Sea Shipping Cooperative Program under the Maritime Administration and Department of Transportation from 2003 until 2008. A past Vice President of the Connecticut Maritime Association, he is a contributing writer for Maritime Logistics Professional magazine and of course, Marine News. A graduate of the Massachusetts Maritime Academy, Kunkel sailed as a licensed engineer and eventually continued his career in ship construction at myriad venues.
Appearing for the first time in our pages, Chris Mandalakis is a recent graduate with bachelors and masters degrees in Naval Architecture and Ocean Engineering from Stevens Institute of Technology. Mandalakis has worked on a number of groundbreaking projects including a series of hybrid electric research vessels as an employee of Derecktor Shipyard and Alternative Marine Technologies. He has been involved in Amtech’s newbuilding construction oversight and design review for tankers at HMD in South Korea, and is currently working with Amtech as a naval architect and design integrator for the 2,200cbm LNG bunker barge currently under construction at Conrad Orange Shipyard. 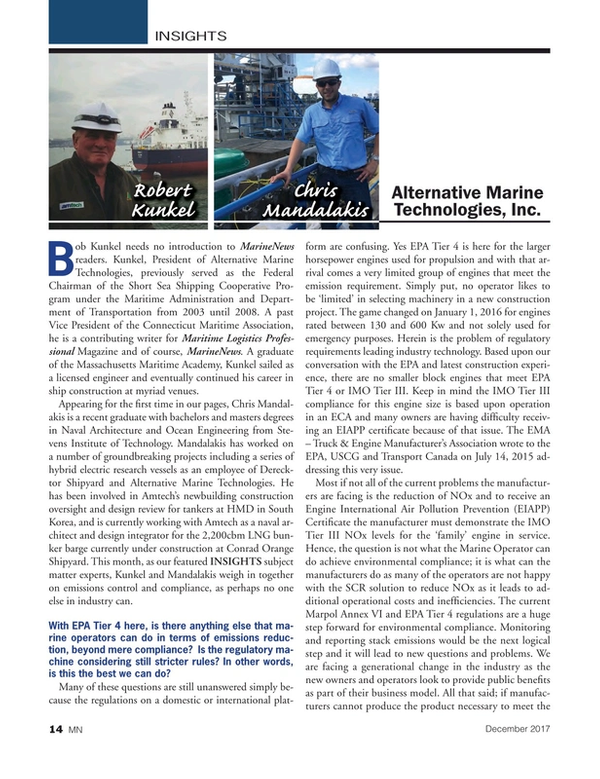