Located in New Orleans, La., Pontchartrain Materials Corporation, LLC provides aggregates to general contractors as well as asphalt and ready-mix companies. In addition to their chief product, limestone, the family-owned company sells recycled concrete and recycled asphalt. Pontchartrain sources the material from quarries in northern states, transferring it down the Mississippi River by barge to one of three company aggregate yards or directly to customers in the New Orleans and surrounding area.
Aggregate suppliers save time and money by transporting materials via barge, but the solution comes with a number of its own challenges. Specifically, unloading material onto the shore can be difficult to accomplish in a safe, efficient manner. Crane rigs offer a versatile option for stockpiling material on river banks or loading trucks, but don’t allow operators to perform the task quickly. Truck ramp rigs grant an operation more speed, but their inflexible structure fails to afford crew members flexibility in material placement and prohibits unloading directly onto the bank.
Custom Design
A number of years ago, Perry Watkins, Vice President at Pontchartrain, started looking for a better barge unloading solution. “We saw a need for a dependable barge stacker to unload with. The conveyor unloaders in use at the time appeared to be under-engineered, limited, and not as safe as we wanted,” he explained. In his search for a quality, long-term solution, Watkins got in contact with Walter Shook of Superior Industries who facilitated communication between Watkins and Superior engineers to address this unique situation. Watkins described the needs of his application to Superior engineers who started working on new designs.
Superior engineers faced the design obstacle of configuring a heavy-duty, telescopic conveyor on a Pontchartrain barge, which would be between 35 and 45 feet wide. The axle length on a standard 130-foot Superior Telestacker Conveyor is over 50 feet. The size constraint required a custom approach from Superior engineers. For example, to mount a Telestacker Conveyor onto a 35-foot barge, the length of the axle would need to be about 28 feet. The standard stacker design incorporated a steel support structure underneath the conveyor called the undercarriage, which raised and lowered the conveyor, providing stability for the axle. The shortened length of Pontchartrain’s custom conveyor required sharper angles in the support system design, a constraint that demanded a steeper undercarriage. However, a steeper undercarriage couldn’t work because it wouldn’t allow for any clearance underneath the unit.
In order to rectify this problem, Travis Thooft, Superior’s chief engineer of portables systems, explains that Superior engineers switched the support system, “from being an undercarriage to what we’ve been calling an ‘overcarriage’ – a support system that rides above the conveyor.” Thooft continued, “By going to an overcarriage we’re able take advantage of increasing those angles which provides a lower force going through the support system.” Part of the challenge with the new design was figuring out how to distribute the weight within the unit. Pontchartrain’s conveyor weighed the same as a standard unit, but the axle weight was increased considerably in order to compensate for the adjustments made to the angles and distances of the support carriage.
“It was a fit for Superior where engineering through problems seemed to be their mission in life,” says Watkins. “Reducing the footprint of a Telestacker Conveyor to fit onto a barge deck while maintaining the conveyor reach is not easy,” he adds.
After the new design proved viable operating in-application, Pontchartrain Materials felt that the custom machine was worth the investment. They purchased the unit in August of 2015. To mount the conveyor onto one of the unloader barges, Pontchartrain’s crew set the conveyor axle on the barge platform and assembled it onto the bearing along with the conveyor tail. They then put up side supports and pinned the actual conveyor portion, including the main and stinger, onto the tail. Simultaneously, the installation crew pinned the overcarriage to the tail. Finally, they attached the head of the conveyor portion along with the cylinder system.
Notably, the Telestacker Conveyor’s fixed radial axle allows operators to move the conveyor over 90 degrees radially, which, combined with the telescopic capability, provides immense flexibility during operation.
Flexible Operation
During the design process, Pontchartrain requested their Telestacker Conveyor to be fitted with a custom hopper on the tail end to meter material onto the conveyor. The hopper has a hydraulically controlled gate that operators can open or close to change the material flow. Before owning a barge-mounted conveyor, Pontchartrain used a crane mounted clam bucket to unload material from its barges directly to a truck or hopper. Thooft describes the difficulty involved with such a maneuver saying, “If you’ve ever looked at a big clam bucket, the control of those is pretty difficult, especially for the operator that is sitting in the crane multiple feet away from where the discharge is. You have this huge load of material that is fairly difficult to control.” The custom hopper on the barge-mounted conveyor gives crane operators an easier target to hit. “The distance that the crane operator moves for each load is significantly less,” says Thooft. In addition to speeding up the process, Superior’s design provides operators with more flexibility in positioning the flow of material and ensures a consistent flow rate.
“It’s a very versatile machine, allowing us to unload to stockpiles and hoppers or onto trucks,” says Watkins. He mentions that one of the best features of the Telestacker Conveyor is the wireless remote control operation, which allows the controller to run the operation from a safe position while always maintaining a clear visual of the operation. “It’s a very safe machine, very steady,” he says.
Watkins vision for a fully engineered, quality barge-mounted stacker provided the catalyst for Superior engineers to pursue greater innovation and a better product for material transfer companies. Custom conveying solutions provide an alternative to slow, stationary operations and equip river businesses with flexibility, efficiency, and speed.
The Author
Daniel Tiernan is a Communications Specialist at Superior Industries.
(As published in the December 2017 edition of Marine News) 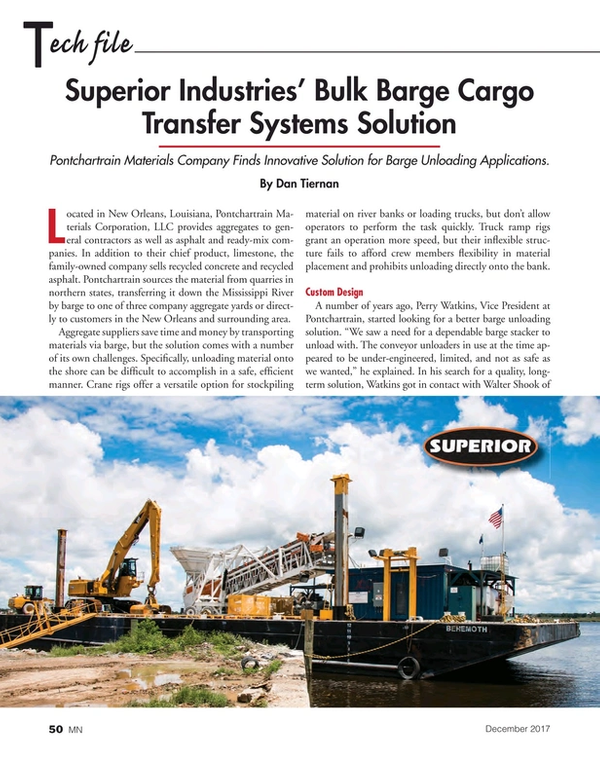